Daleks in the System 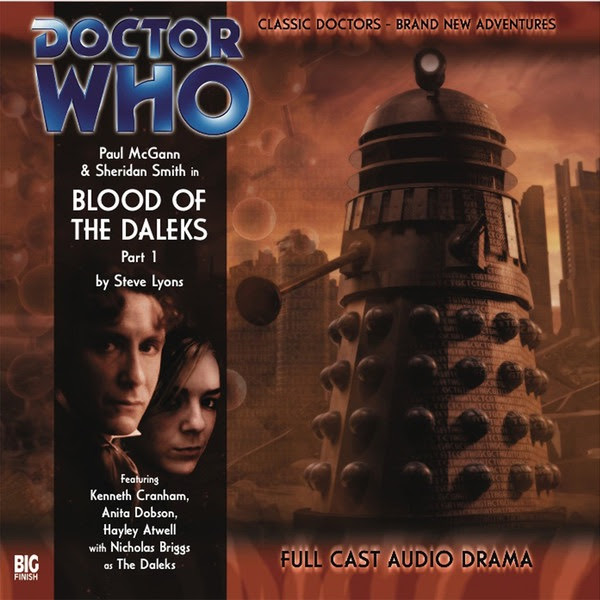 Sometimes even Daleks can be subtle. Blood of the Daleks, a two part Eight Doctor Doctor Who audio play from 2006/2007, is set in a colony beset by the social and political problems arising from resource scarcity in the aftermath of a global calamity. I found the portrait of citizens desperately scavenging, hoarding, and attacking people, paranoid about the politicians, and generally panicking nicely developed through the story.

The Doctor (Paul McGann) also gains a new companion in this, his first adventure in his own Big Finish series of audios outside specials and the regular monthly releases. Lucie Miller, played by Sheridan Smith, is a bit ornery compared to Charley Pollard, Eight's most recent companion for listeners at that point. And Charley was no shrinking violet. Lucie seems to get on the defensive about everything but that's somehow not annoying. Her sudden appearance in the TARDIS baffles the Doctor and over the course of the story we learn little else about how she got there, this being part of the general story arc of the series.

Hayley Atwell, four years before she was cast as Peggy Carter, also appears as one of the political types being menaced by a mob when the Doctor arrives. Which is not to say she's entirely innocent herself. But the villains here are the Daleks, of course. When they do finally show up, the title of the story, Blood of the Daleks, turns out to be related to a fixation with racial purity and one faction of Daleks seeking to destroy a mutated faction, much like in Remembrance of the Daleks. But in the context of the problems in the human colony it still works really well. I also loved the name of the colony, "Red Rocket Rising". It sounds like something that might have sounded hopeful but circumstances have easily made ominous.

Posted by Setsuled at 3:47 PM
Email ThisBlogThis!Share to TwitterShare to FacebookShare to Pinterest
Labels: audio play, blood of the daleks, doctor who, eighth doctor, paul mcgann