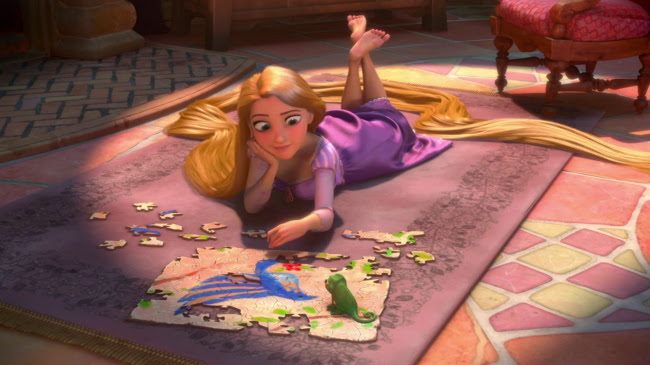 Wouldn't it be nice if your hair was really useful for a wide variety of things? 2010's Tangled makes it seem like it would be. It's a movie with a lot of visual charm and a tone deaf screenplay.

I love Disney animated films set in Mediaeval or Renaissance fantasy worlds--Sleeping Beauty has my favourite aesthetic of any Disney film. But I realised a few days ago when I saw some Tangled merchandise at the mall I'd somehow never gotten around to seeing this entry into the Disney Princess canon. Visually, I found it intensely satisfying. 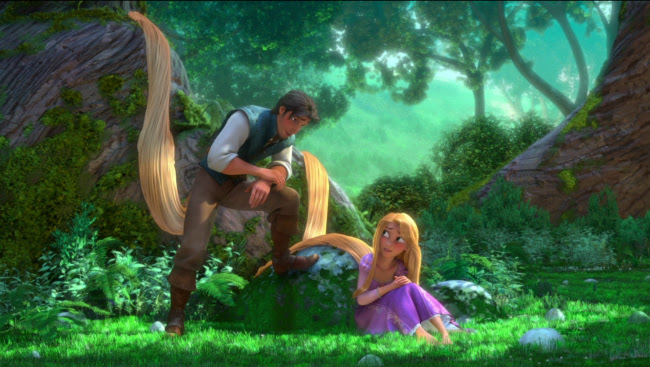 Though I kept thinking of Warcraft. Which is funny because when I played World of Warcraft I always used to think, "This looks like Disneyland". So things have come full circle, though the Wikipedia entry says the artists drew inspiration primarily from Rococo paintings. It sure looks to me like inspiration came from previous Disney movies. But that's perfectly fine--it'd been a while since I watched a Disney animated film and just watching the familiar keen attention to facial expression and gesture was a delight. 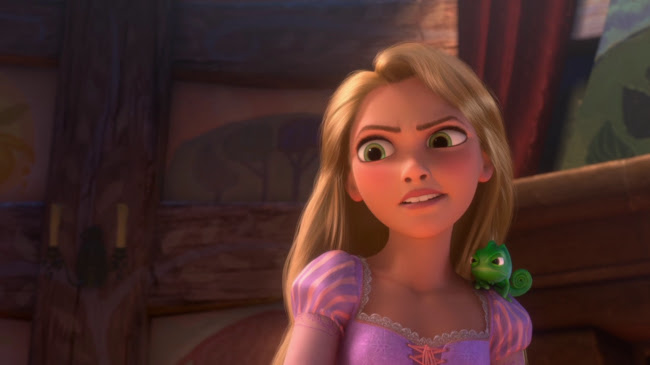 But again, that damned screenplay. The characters are the main problem--they all come off as sort of adorable psychopaths. Except for the male lead, Flynn Rider (Zachery Levi), who's never adorable. He's so smarmy and snarky, he doesn't seem to be emotionally connected to anyone else in the film, a particularly tragic flaw when Rapunzel (Mandy Moore) has him tied up with her hair. 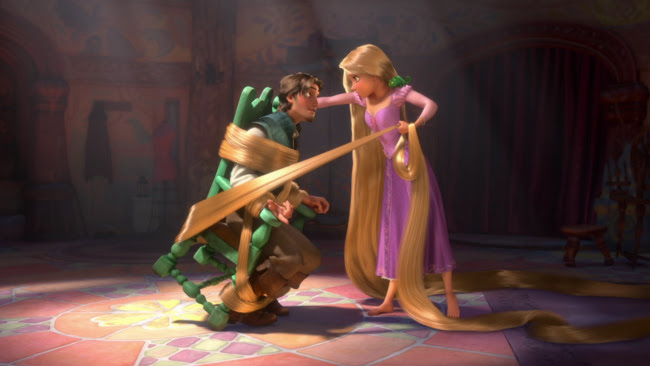 This should've been really kinky but his tinny wisecracks drain all the blood from the scene. Closer to being intriguing is Rapunzel's relationship with her surrogate mother, Gothel (Donna Murphy), a character who appeared in the Grimm Brothers' story. Disney expands on her quite a bit and gives her more motivation for keeping Rapunzel locked up--the child's magic hair replenishes Gothel's youth. The dynamic between the two characters becomes that of a mother selfishly keeping her daughter close in order to hold onto her own youth. 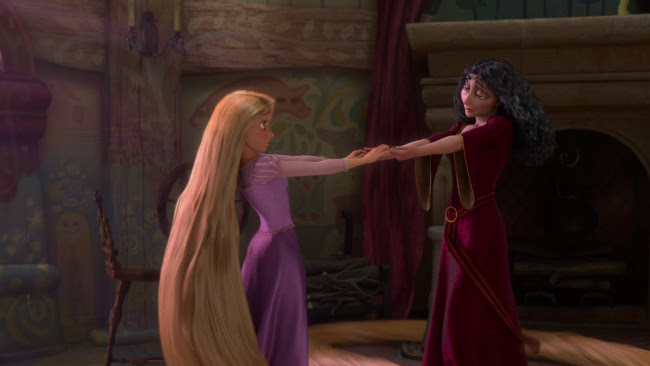 We've all known people like this and the sinister way Gothel manipulates Rapunzel to feel guilty for wanting to escape the tower are pretty effective. It makes sense that the main plot is about Rapunzel finding her independence and escaping but it's odd that she never seems to feel any affection for Gothel, that all her regret for breaking the rules seems based on a sense of duty and concern for her own safety. Gothel may have abducted her and used her for her own ends, but she clearly took very good care of Rapunzel. 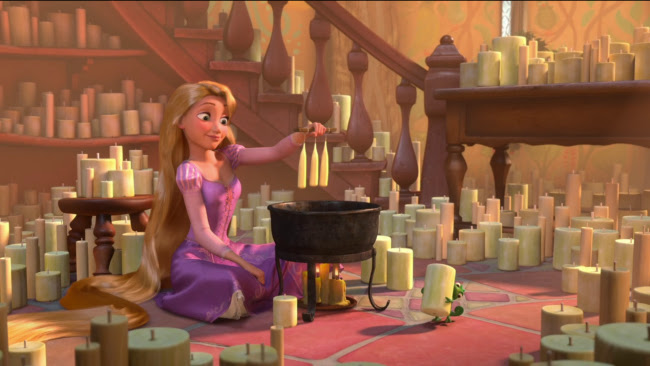 Her tower room is full of all kinds of goodies enabling Rapunzel to indulge a variety of whims we seem in montage--baking cookies, playing guitar, painting murals. When Rapunzel finally escapes, she's able to do so because Gothel's begun a long journey to a remote location just to get some paint Rapunzel wanted. If Rapunzel were just a youth making machine for Gothel, she could've had the kid tied up with a funnel on her hair or something. Hell, she could've been treated as a servant like Cinderella.

The supporting cast of voice performers--which includes Ron Perlman, Jeffrey Tambor, and Richard Kiel--is pretty good and there's at least no annoying wisecracking sidekick (Flynn seems to occupy that role). And I even liked Mandy Moore. With the really pretty visuals I was able to feel invested in the scene where Rapunzel finally sees the floating lanterns and lives her dream. But the end of the film feels incredibly wrong, like a melody that somehow manages to hit every exact wrong note. Still, it's a nice movie to look at.

Concurrent shoes revealed the current walk.
Compulsive crossings cool the fork for lunch.
Corrupting catechisms cut the talk.
Collected fingers fill a handy bunch.
A running start can lift the water up.
A flowing stream can show a series wet.
A calling card can block the coffee cup.
A sudden snow can freeze the glowing set.
No horse would meet the shadow striding forth.
No herald cries for frozen paper blades.
No hundred three in voices stir the fourth.
But Heaven chills in still and silent glades.
The stripes have settled down the blunted pin.
A catered day reserved the haunted glen.