Is Glamour a Horror? 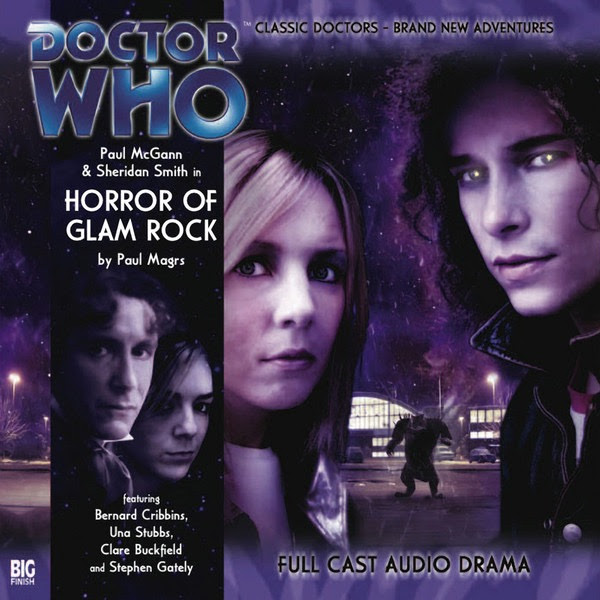 Here's a Doctor Who audio play I'd been wanting to listen to for a while--Horror of Glam Rock, an Eighth Doctor story from 2007. I love the title's play on the Fourth Doctor television story Horror of Fang Rock and it always stuck out when I was looking through titles. But I wanted to finish Eight's monthly range stories before I started on his own series. I finally had a listen last night and enjoyed it, though maybe found the variety of stories relating to the production a little more interesting.

The Doctor (Paul McGann) and Lucie Miller (Sheridan Smith) find themselves in 1974 Bramlington on an overpass during a terrible snow storm. They soon find the mutilated corpse of an aspiring glam rocker and so a mystery unfolds that involves the Doctor making frequent references to his love for David Bowie and Brian Eno. As a fellow Bowie and Eno fan, I certainly appreciated it.

Bernard Cribbins, shortly before he appeared as Wilfred Mott on the television series, here plays Arnold Korns, a cutthroat manager for rock musicians. You can tell this story was written during the Tenth Doctor era for how morally grey it is, Korns being a somewhat complicated character whose work ethic leads to something really horrible happening. But he doesn't become a villain and Cribbins' unassuming performance, even when he's grandstanding, made me continue to pull for him. Una Stubbs--Mrs. Hudson from Sherlock--is also in the story as a service station employee and it's satisfying and kind of sweet hearing her rebuke Korns for his callousness.

Taking another cue from the Tenth Doctor era, some romantic chemistry between the Doctor and Lucie is already in evidence despite this being only their second story together. The actors pull it off well--it's nice hearing Lucie's prickly guard slowly being lowered and Paul McGann is a cool Prince Charming.

Not all the glam rockers are dead in the story--a pop singer named Stephen Gately plays Tommy Tomorrow. Gately, who was a member of a band called Boyzone, died in 2009 from a congenital heart disease. According to Wikipedia, his last single recorded as a solo artist was "Children of Tomorrow", which was composed for this Doctor Who audio play.

Not the best lyrics but he has a decent enough voice and I like how he tries to imitate the sound of a 70s glam rocker. I guess it's appropriate that the only other time I remember hearing of Boyzone is when David Bowie was asked in an interview if the "boy zone" mentioned in his song "Looking for Satellites" was a reference to the band. Bowie said, no, he hadn't heard of the band at the time he'd written and recorded the lyric (I'm not sure where to find that interview now).

It's a good audio play though I prefer the length of the monthly releases--this one is only 45 minutes. Making it a bit like a television episode, I suppose.

Posted by Setsuled at 10:36 AM
Email ThisBlogThis!Share to TwitterShare to FacebookShare to Pinterest
Labels: audio play, doctor who, horror of glam rock, paul mcgann