Them There Glowing Blue Eyes 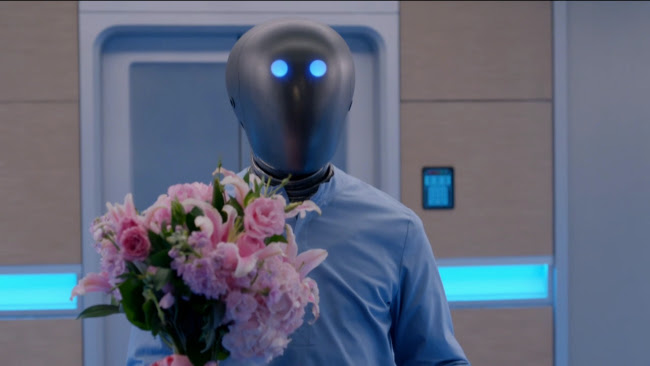 Last night delivered the best episode of The Orville yet. "A Happy Refrain" didn't merely follow the pattern set by Star Trek: The Next Generation but actually improved on one of the older series' more memorable episodes. Just as I suspected, the show has used Claire and Isaac to create a story like the fourth season TNG episode "In Theory" in which Commander Data and a human attempt a dating relationship. For The Orville, Seth MacFarlane has written something smarter about artificial intelligence and more insightful about human nature than its predecessor. In the process, he creates several scenarios that are both thought provoking and very funny. 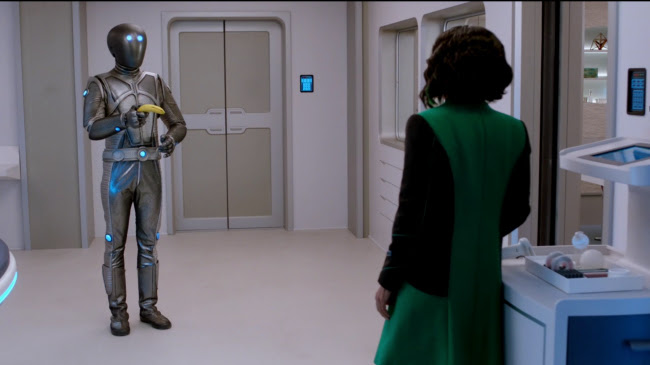 "In Theory" portrayed the relationship between Data and a young human woman, Jenna, as arising from his desire to learn more about what it means to be human and her desire for a more emotionally reliable partner. It ends up not working because Jenna discovers she needs a companion who can understand and sympathise with her emotions. The Orville could've gone this route, and in the relationship that's developed between Claire (Penny Johnson Jerald) and Isaac (Mark Jackson), such a trajectory might be plausible from how useful he's been to her in helping care for her children. Instead, though, we find a woman who has a good idea of exactly what she's getting into. 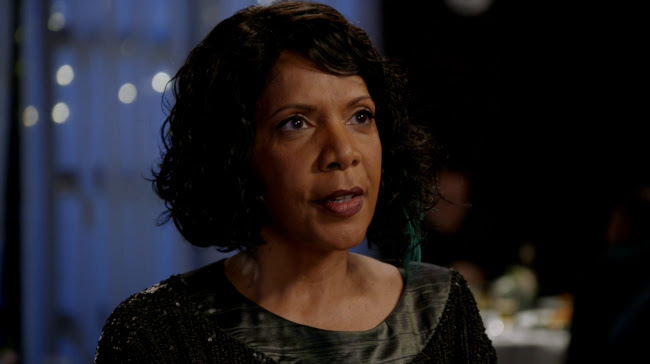 Both Ed (Seth MacFarlane) and Kelly (Adrianne Palicki) remark on how they consider Claire the wisest person on the ship so they're less worried about her than they would be anyone else. When it's suggested that Claire is just projecting her own ideas onto Isaac, Claire provocatively argues, "Don't we all do that, in any relationship, especially when someone's being a little mysterious?" 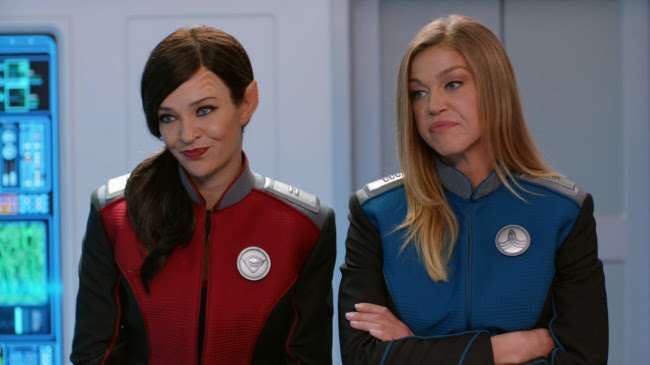 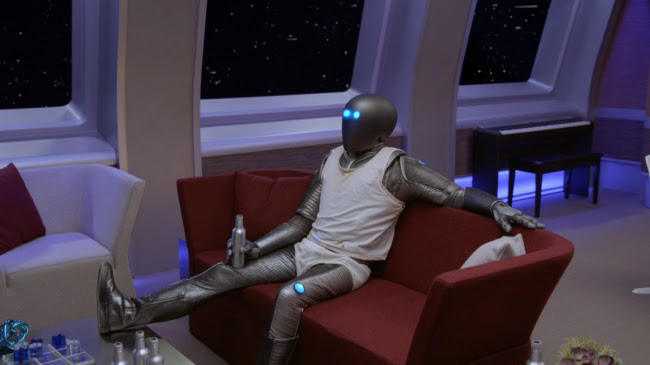 But just like with Data, the point of the episode is to explore the ambiguous edge of sentience; what is the something that distinguishes Isaac from metal and wires? Dwelling on that question too much is a little fruitless when we're talking about a fictional being who's really as sentient as the writers decide he is. But years of commentary and parodies have shown up the flaws in the old concept and MacFarlane is obviously well versed in them. He knows to avoid many of the cues that gave Data away as more human than he was supposed to be. Isaac is much more of an asshole, heartlessly casual about breaking up with Claire because he's had sex with her. The hilarious scene where he follows LaMarr's (J. Lee) bad advice to break off the relationship by acting like a jerk, forcing Claire to break up with him, only further emphasises his limited concern for her feelings. 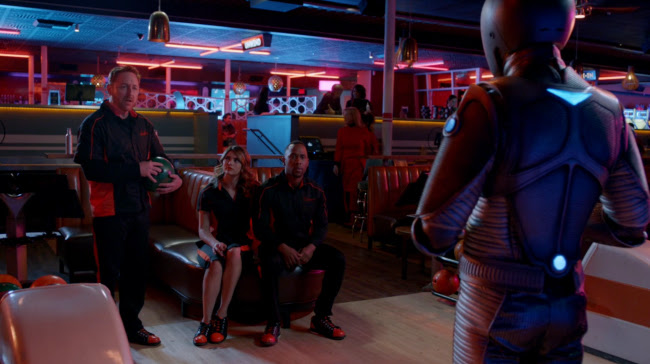 So when Isaac creates a human simulation for Claire to more satisfyingly share a kiss with we see what a difference a face makes. It's not just the physical contact of a kiss, it's the extra, tiny bits of information one instinctively reads from every minuscule change in a human facial expression. It doesn't hurt that actor Mark Jackson's not a bad looker, either. Projecting indeed. 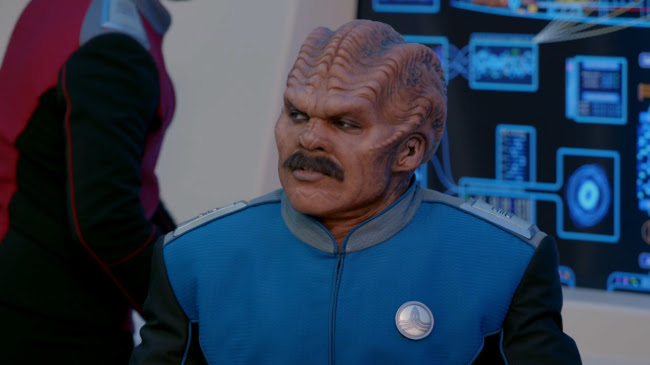 With the great, absorbing central plot the episode has a lot of excellent garnish; the two social circles of the guys in engineering and Kelly, Claire, and Talla (Jessica Szohr); Bortus' (Peter Macon) moustache (that alone almost killed me); and a surprisingly cool sequence with a symphony orchestra in the shuttle bay conducted by Mark Graham, who's "head of music preparation" for The Orville and has also worked on the past few Star Wars and Marvel films. 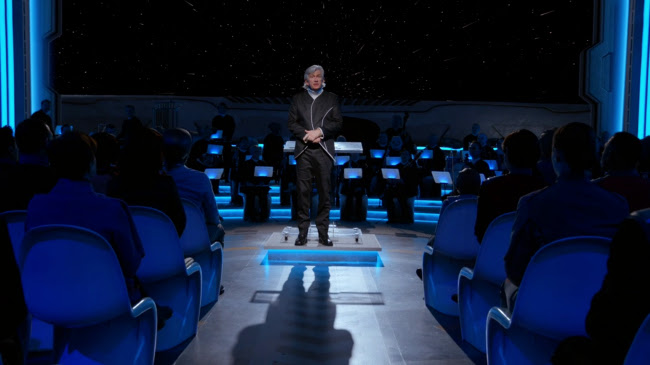 "A Happy Refrain", especially after last week was a bit disappointing, was really great to see. The performances by Mark Jackson and Penny Johnson Jerald were amazing, too--I have to say I really underestimated Johnson Jerald. But I don't remember her ever being this good before. If I had six thumbs they'd all be up for this episode.

A straying mount conveys his rider wrong.
Addresses writ on ev'ry stone were odd.
The even blocks were tasked to prop a song.
This castle's known to neither witch nor god.
In corners gathered webs absorb the shade.
The rider's steps resound in mould and stone.
In glittered motes the light begins to fade.
At length she finds a plate of ravaged bone.
Abandoned chairs were placed about the hall.
A banquet long decayed awaits the guest.
A whisper cuts the dust behind a wall.
The rider spies an eye but late at rest.
A sudden rain barraged the broken door.
A flash of light revealed but little more.