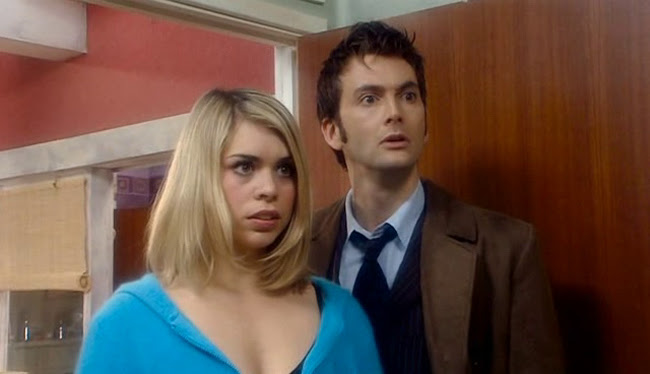 I seem to appreciate the Russell T. Davies era of Doctor Who a lot more than I did the first time I watched through it. I always liked it, though I generally disliked the season finales. But last night I watched the end of the Tenth Doctor's first season, "Army of Ghosts"/"Doomsday" from 2006, and loved it. Ten and Rose are so good together and I love seeing the Daleks wipe the floor with the revival era Cybermen. 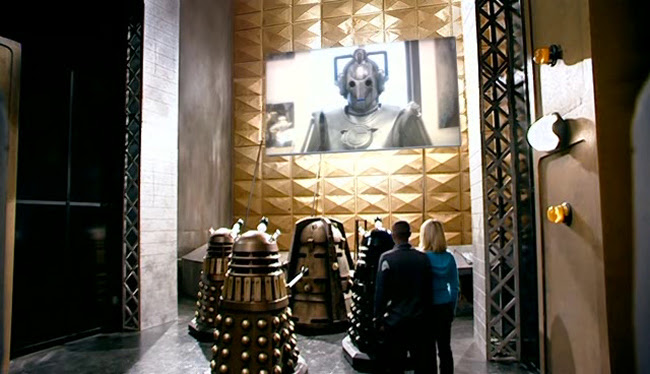 Generally I prefer the classic series where the romantic chemistry between Doctor and Companion is understated if it's there at all but I've really grown to appreciate what Davies did. The revival era has often felt like commentary on the old series, something halfway between fanfiction and reinterpretation. There's much more focus on the Doctor as a character with him becoming almost a Christ figure in the Davies era while at the same time bearing the weight of his own sins. That's the kind of extreme focus you might expect from fanfiction. At the same time, Davies brings in the "domestic", an interpretation of what Doctor Who, the series, meant to a regular kid watching it growing up, and successfully transmutes it into meaningful experiences for the characters on the show. 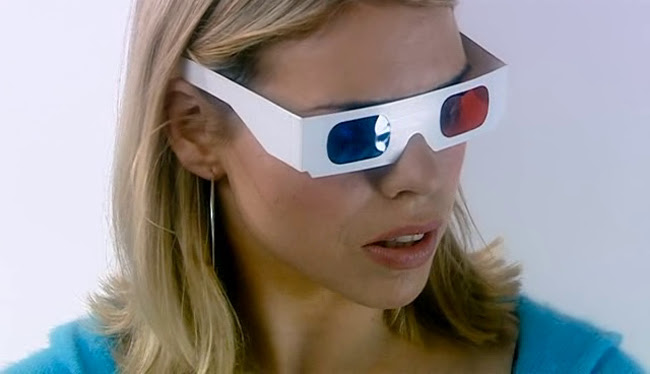 By which I mean, it's not like the Doctor pulls clips from old episodes and asks companions to comment, or even nods and winks at the audience. Rose trying to explain to her mother how great it is to be flying around the universe instead of working in the shop is a moment that touches directly on what I mean. 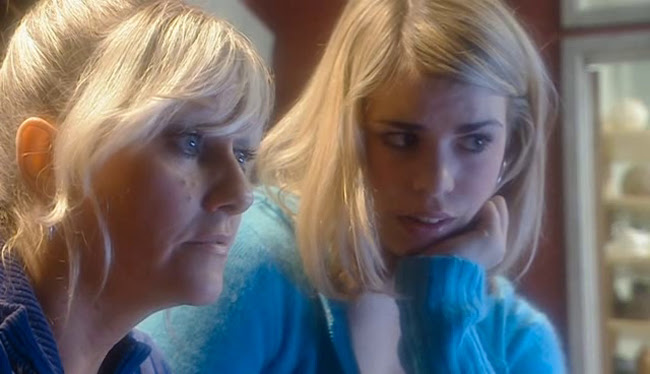 Jackie, Rose's mother, is offended--"I worked in a shop, what's wrong with that?" She never had the opportunity Rose had. And Rose's point isn't that there's something wrong with a person working in shop, but there's also no sense kidding ourselves any one of us wouldn't be off in a TARDIS if we could. Admitting that is, inevitably, to admit life is fundamentally disappointing. So disappointing that most people don't want to acknowledge it. But the kind of kids who watched Doctor Who would think that way. 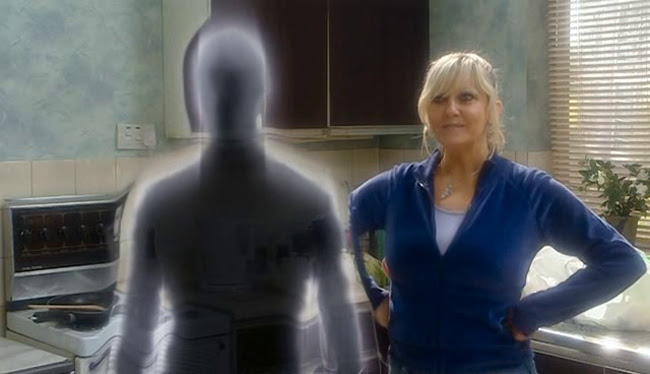 I felt bad for Jackie watching the episode again last night. She's so sure the ghost appearing in her flat is her deceased father. She even believes she can smell his cigars. She even taunts the Doctor a little, pleased for once to think she knows something he doesn't, but it turns out that's still not the case. 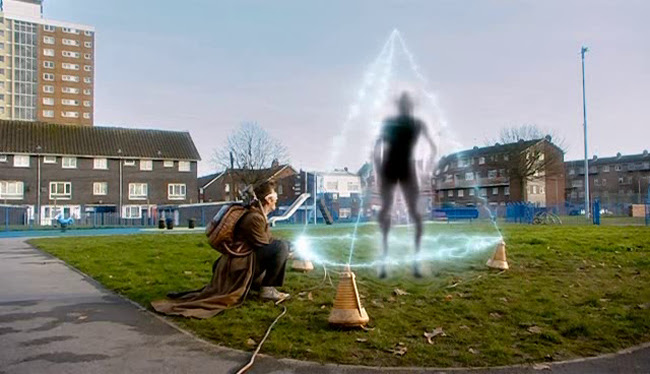 "Army of Ghosts" also has a nice moment referencing the Doctor's dislike for guns. Rose tries to stop him from leaving the TARDIS to confront a group of soldiers with rifles pointed at him:

DOCTOR: And I haven't. Which makes me the better person, don't you think? They can shoot me dead but the moral high ground is mine. 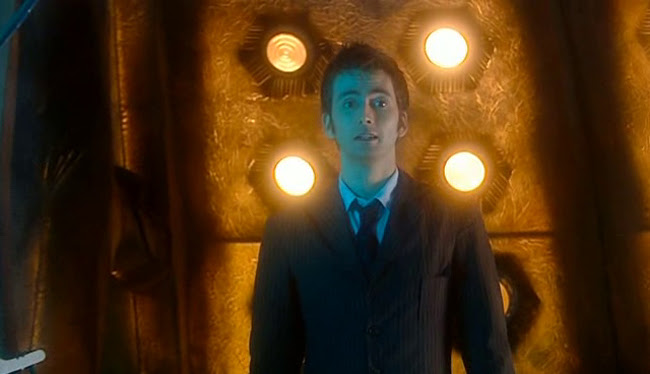 I respect the Doctor a lot more for following his philosophy knowing full well it's impractical than in the recent season where circumstances around the Doctor are improbably rearranged to make the idea flawless. Though, in the instance in "Army of Ghosts", it is actually practical, if he has to go out and confront the soldiers at all--he'd never be able to gun them all down before they got him, the only reasonable course is to demonstrate they have no reason to shoot him. 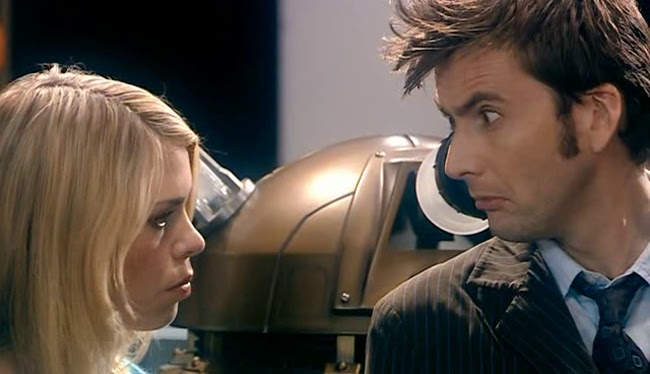 It's strange how far the show has strayed from romance since the Davies era. Like I said, I like the classic series with its smaller focus on romance, but it's clearly a key part of what brought massive ratings to the show in the Davies era. It seems strange the show would be reverted in this regard to the format it was in when it was cancelled in 1989. Well, look, I've supplied you with another explanation for the show's decline in ratings. I suspect it's this much more than the Doctor being a woman now. 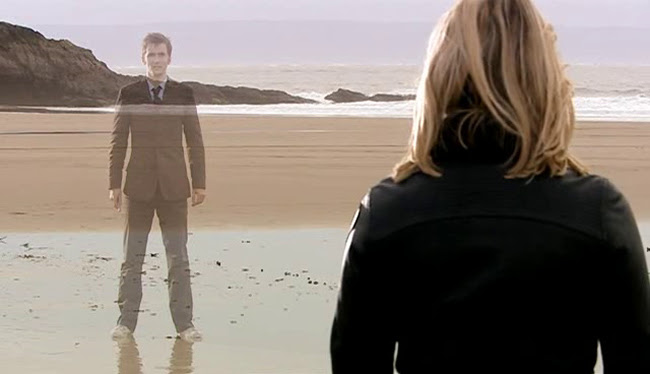 It's so bittersweet seeing Ten and Rose separated. David Tennant plays a young Doctor but you can always see the layer of experience underneath while Rose, as the dialogue about working in a shop demonstrates, feels very much like a young person feeling out her place in the universe for the first time. The 50th anniversary episode's interpretation of the Doctor becoming externally younger makes sense as a sort of psychiatric self-treatment, and his preference for younger companions would seem part of that, but it is nice watching him gradually realise there's something more genuine between him and Rose. 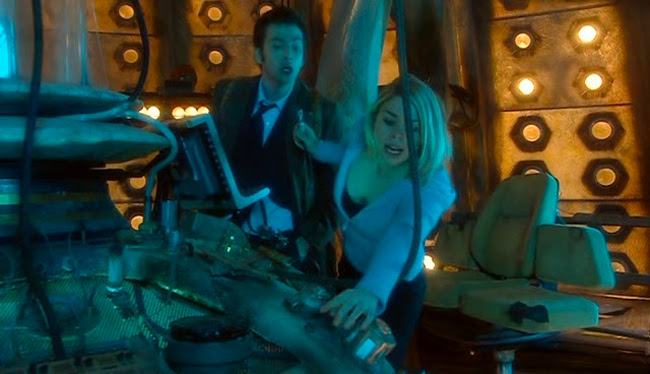 Compared potatoes turn the tot to trust.
A timer burned the fries beyond the pan.
The larger spuds were painted gold and rust.
The stowaway turned out to be a yam.
Intimation surged in fortune's purse.
A slow deserving court remained to talk.
In better sleds the paintings still rehearse.
On harder snow the patients simply walk.
Encouraged stars repeat in storied lines.
As pearly dots emboss the books of sky.
A burning Braille becomes the harder signs.
The hand of God gave phones a second try.
Collected pegs create a cleat retreat.
Assorted socks will let the feet compete.