A Dime the Shadows Covet 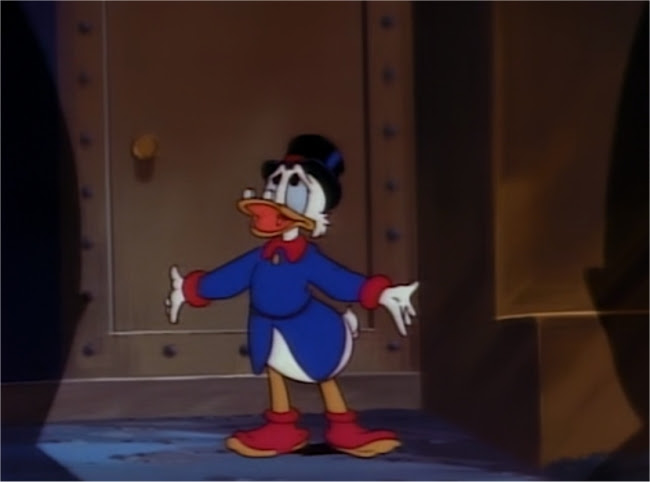 There are other treasures on Disney+ besides Star Wars and Marvel. There're also Disney things. Many of my childhood favourites, like DuckTales, for example. I mean the old one, of course. I've seen the first episode of the new one and I'll probably watch it through eventually but for now I'm content to have a reliable source for the classic series. Though, like many series, Disney is for some reason streaming the episodes out of order. In this case, it's an old problem because I remember my DVD sets also did not include the first episodes on the first collected volume, I think because they were labelled as pilot instead of as the first episodes. Whoever puts these things together seems to be on autopilot. Or maybe that's just it; it's AI.

Anyway, I hopped into the middle of the first season a couple nights ago with "Magica's Shadow War", a surprisingly provoking tale of Magica De Spell (June Foray) bringing her shadow to life in order to steal Scrooge's lucky dime. 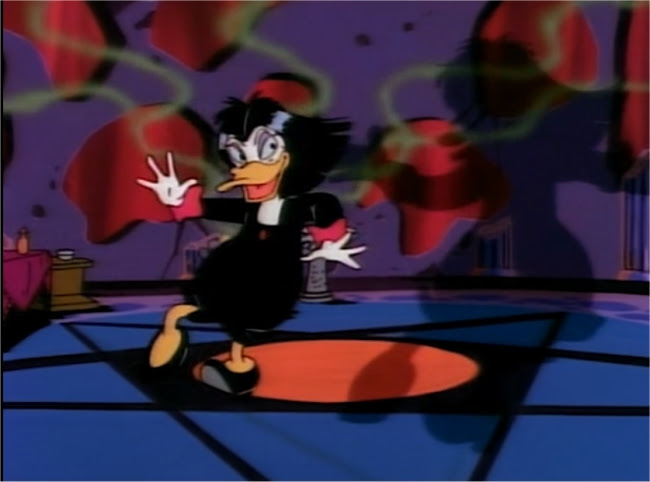 It's her usual goal, established by Carl Barks in the original Uncle Scrooge comics, but it's one that is curious in itself. The concept that this item, to which Scrooge (Alan Young) himself mostly only ascribes sentimental value, is coveted by De Spell, a witch, as something of great value. Is Scrooge really a self-made duck, or was it a matter of destiny, fate arranged by the gods via a dime? In this, one can surprisingly see a basic argument between left and right. The ambiguity is fitting, too, because usually we don't see exactly to what extent someone owes their wealth to luck or their own talents. Magica, in the villain role, seems fitting as her conception of the dime would mean the world is a place where Scrooge's own decisions and actions have little meaning. 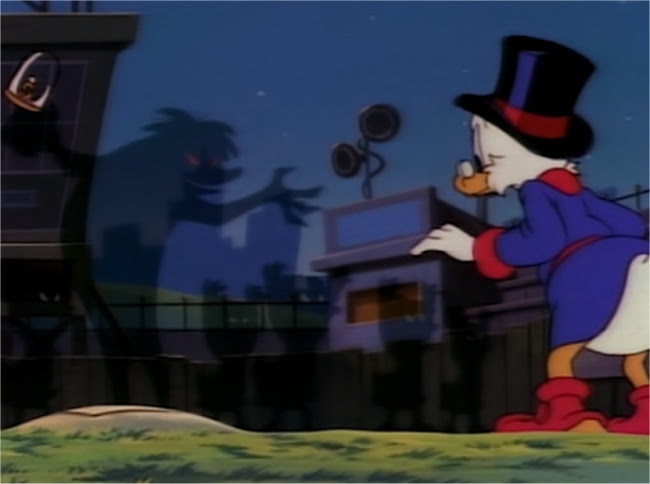 The shadows bring this to another level. First there's just one, Magica's, then, when it rebels, it spawns others. All alike, each the same distorted copy of Magica herself. And they all want the dime, insisting that it's their right. They've fully assimilated Magica's idea that the dime is responsible for Scrooge's success and it becomes, in the minds of the shadows, a power Scrooge has stolen. It can't be that Scrooge owes his success to his own hard work and ingenuity.

A penny school removed the dollar's worth.
The flying car advanced beyond our reach.
Another Mars displaced our lonely Earth.
There's something else a plastic globe can teach.
A shadow's dime was lost in piled cash.
Exclusive banks encase the liquid gold.
The market value's printed 'long the sash.
Expenses crush the story while it's told.
A hidden cake conceals another chip.
Computer thoughts begat careers at home.
A cottage quilt portrays the vicar's lip.
The metal showed the water where to roam.
The pictured cat resolved in pixels clean.
A giant land condensed inside a bean.