War Spares Not the Lovable

During World War II, many Soviet women served in the military, mostly in medical roles but a significant number were pilots, snipers, and ground troops. The reality probably didn't look a lot like 1972's The Dawns Here are Quiet, which depicts one male officer chagrined to find himself in charge of an adorable all female unit at a remote outpost. Divided in two parts, the first introduces us to the bright eyed young lasses with their pure hearted hopes and dreams while the second half concerns their tragic attempts to stop a group of Nazi scouts. The movie was designed to inspire love for the Soviet Union and hatred for its enemies and I can't deny it works its spell effectively. I wanted to hug all these girls and brutally murder all the Nazis who threatened them. 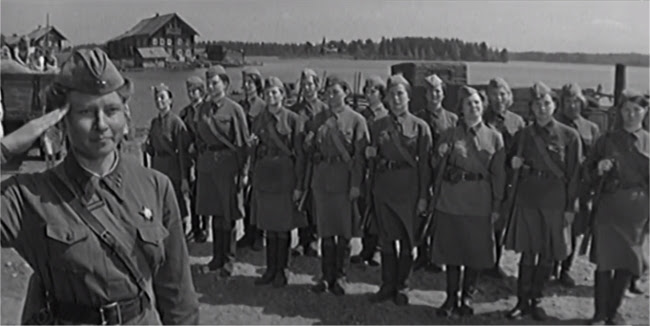 The first half of the movie is so moe it's almost a slice-of-life anime. Every single one of the gunners assigned to the meagre outpost is petite, sweet, and has a backstory about lost love or sneaking rations to a struggling family. Like an anime, too, there's an obligatory bath house scene, in this case a steam bath in which everyone admires Zhenya (Olga Ostroumova) for being the most beautiful of all and with the best figure.

Oh, come on, girls, you're all worthy.

All of them are in various levels of love with Senior Sergeant Vaskov (Andrey Martynov) who tries to hide his embarrassment behind a brilliant, enormous moustache. He awkwardly decides to visit the barracks while the girls are dancing, just to hang out and watch, but everyone stops because he's there and he's obliged to awkwardly remove himself. 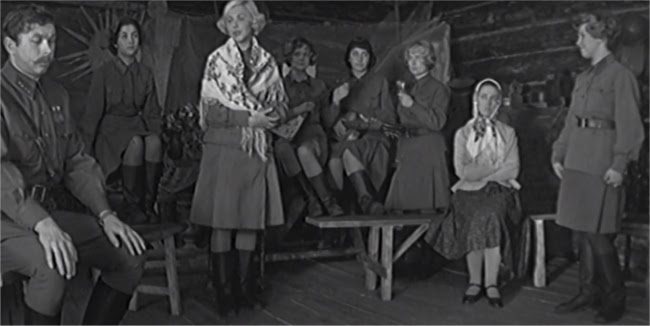 Vaskov's number one fan is Lisa (Yelena Drapeko), who's teased for it by the others. This makes it all the more heartbreaking when, in part 2, she's sent back alone from the reconnaissance party to report on the Nazis being in greater number than expected. She runs too fast and gets stuck in the mud, gradually sinking in, gasping for air before submerging completely.

Most of the film is black and white but flashbacks and fantasies are shown in colour. Vaskov starts to have visions of the girls in colour in part two and if it doesn't bring a tear to your eye you're made of sterner stuff than I.

The Dawns Here are Quiet is available on Amazon Prime in two separate parts. Part I is in the original Russian with English subtitles while Part II, for some reason, is mostly an English dubbed version but some random scenes switch to the original Russian.

Posted by Setsuled at 10:41 AM
Email ThisBlogThis!Share to TwitterShare to FacebookShare to Pinterest
Labels: movies, soviet union, the dawns here are quiet, world war ii