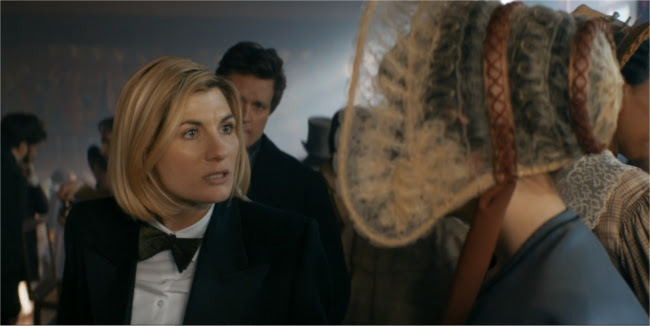 Well. I liked part one. Watching Sunday's new Doctor Who, "Spyfall part II", was like being on a rollercoaster, going up a steep hill to reach the top and . . . levelling out, coming to a stop, and exiting the ride safely. We were presented with some recycled plot bits about the Master and Gallifrey as though they were new, dramatic revelations. It was sort of like if The Dark Knight had ended with Commissioner Gordon saying, "It turns out the Joker . . . is a villain!"

Meanwhile, comedy bits with the Doctor's Companions, Graham (Bradley Walsh), Ryan (Tosin Cole), and Yasmin (Mandip Gil), seemed about two seconds away from the three of them hitting each other with rubber mallets or throwing pies in each other's faces.

RYAN: "Rocket cufflinks! To be fair I didn't read the instruction on those either."

GRAHAM: "Yeah, the pair of you, a right couple a doughnuts! Ah. There's no-one I'd rather be on the run with."

Aww. They're like the Three Stooges except they hug each other after fighting. A few minutes later I was watching Graham dancing around shooting pink lasers from his toes without any clear aim and the main question I had was, "Why the fuck am I watching this?"

Jodie Whittaker's still trooping along with a good performance. She got a laugh out of me when she was frustrated with herself for accidentally calling herself a man again. I like the idea of the Doctor running into Charles Babbage (Mark Dexter) and Ada Lovelace (Sylvie Briggs) but Babbage spouting some random sexism about how woman are decoration--and then Ada being so passive as to essentially be decoration--was not the most exciting use of these impressive personages.

But it was the episode's conclusion that dropped, well, not the bomb but--what? The water balloon? Gallifrey had been lost again and this time the Master (Sacha Dhawan) was taking credit because the "founding fathers" of Gallifrey weren't who the Doctor and the Master thought they were. What does that mean? So Rassilon and Omega weren't really murderous madmen? Virtually every story about Gallifrey's past since the 70s has been about how the founding fathers were nuts so I can only imagine the Master's secret revelation about them is that they were actually perfectly decent fellows at all times. Somehow I doubt that's the idea, though.

The Doctor, exasperated, asking the Master if he ever stopped his evil antics sure didn't feel like the Doctor had just recently finished spending a whole season rehabilitating an imprisoned Master. There's been plenty of times where the Master's regeneration wasn't explained but this is ridiculous. It really feels like the show is pretending Missy just didn't happen, which would make sense if the character had been wildly unpopular but my impression was that the opposite was true. The Doctor in the first part of "Spyfall" even has a line about how being a woman now is an "upgrade", much like a similar, funnier line Missy had ("Some of us can afford the upgrade"). Is it possible that Chibnall or some of the producers decided that Missy, as conceived, was a product of misogyny? That's the impression I'm left with when formerly a villain's line is given to the hero and that incarnation of the villain, in which she had become a more nuanced and interesting character, has seemingly been erased. It's ironic the episode concludes with the Master hinting at an erased history of the Time Lords.

So I guess the uplifting conclusion of the 50th anniversary special has been overturned. People complained that that twist had upset the Doctor's central internal drama for the Russell T. Davies era. But the anniversary special pointed out an aspect of the Doctor's destruction of his homeworld that hadn't been previously alluded to, that in the process the Doctor had killed not just a corrupt, warmongering establishment but also millions of children, innocent adults, and possibly Leela and Romana (who returned from E-Space in tie-in media) and at least one version of K-9. This, combined with the fact that the 50th anniversary was enough of a special event to overturn a cornerstone of the overall story, made me happy with the resolution. What does "Spyfall" leave us with? A villain rebooted as simplistic doing a really bad thing that had already been done before. With dopey companions. I'm starting to feel like the target audience is gorillas and dolphins.

A line of teeth continues cleaning bones.
A glass of dust resembles drying milk.
The metal tombs resound in music tones.
The certain box's lined with ragged silk.
The missing nails foretell a sinking ship.
A running pawn dismissed the rooks and knights.
The broken prow behind the waters dipped.
A dozen days disturbed a million nights.
A shadow moves without a body's aid.
A picture gasps before a withered hand.
With missing months and blood the room was paid.
A bat repulsed the hordes across the land.
A tower cracks and changes shape to mist.
A secret pulse infused a gentle wrist.

Posted by Setsuled at 12:19 PM
Email ThisBlogThis!Share to TwitterShare to FacebookShare to Pinterest
Labels: doctor who, television, tv show