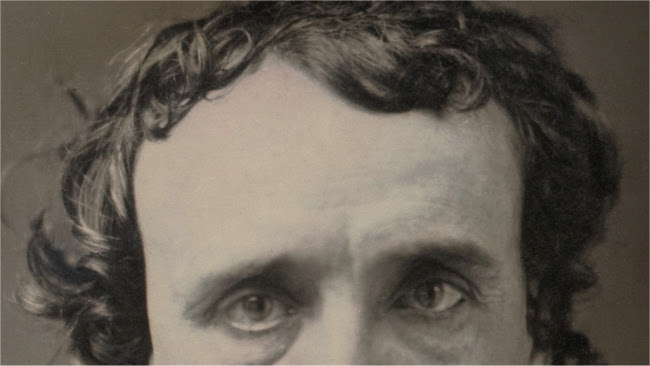 Ray Bradbury obviously found Edgar Allan Poe's forehead rather striking. In his short story "Exiles", included in The Illustrated Man, Bradbury more than once returns to the forehead as a point for vividly describing the 19th century poet.

Mr. Poe’s black eyes brooded under his round and luminant brow.

. . . They moved down the echoing throats of the castle, level after dim green level, down into mustiness and decay and spiders and dreamlike webbing. “Don’t worry,” said Poe, his brow like a huge white lamp before them, descending, sinking.

It is an impressive brow, at least in every picture I've seen, and invoking it does help create the mental image. "Exiles" is a story in which many of Earth's great writers live in some strange form on Mars alongside hordes of their creations. The story actually begins with the witches from Macbeth, just a few of the many assembled to defend the planet from an approaching human rocket. On Earth, the great works of fiction have been routinely burned, a detail foreshadowing Bradbury's own Fahrenheit 451. In "Exiles", the book burning causes the spirits of the authors and their creations to fade and finally vanish entirely. It's a more fantastic tale than Fahrenheit 451 and bittersweetly effective.

An odd man among the denizens Bradbury places on Mars is Charles Dickens, who parties at Fezziwig's and refuses to join Poe and Ambrose Bierce in defending against the Earthlings, insisting he's above the stories about ghosts and witches and their authors. He even seems to kind of like the humans who only burned his books, he feels, by mistake. I wonder if this is due to the underlying leftwing nature of Dickens' basic arguments in his work. At the time Bradbury published "Exiles" he was a Democrat but in 1952 he took out an ad in Variety in which he wrote; "Every attempt that you make to identify the Democratic Party as the party of Communism, as the ‘left-wing’ or ‘subversive’ party, I will attack with all my heart and soul." Which goes to show how differently Democrats regarded themselves at one time.

Bradbury's Poe points out to Dickens that he did indulge in writing ghost stories, with A Christmas Carol and The Christmas Goblins. Of course, Dickens' writing also has much that could appeal to conservatives--I've heard Uriah Heep, the villain of David Copperfield, referred to as a perfect parody of a leftwing ideologue. The humans of "Exiles" have also banned Halloween and Christmas which reminds me of Oliver Cromwell's England in which Christmas was also banned. And plays, for that matter. Like the humans of "Exiles", the English Puritans believed in total commitment to reason and abhorred superstition. "Superstition" is a word that Bradbury uses twice in "Exiles" by Poe but I wasn't clear on whether or not this Poe approved of superstition or deplored it.

One of the men on the rocket has nightmares. I really liked the idea that humans without fantastic horror fiction would naturally have strange nightmares as though some natural feeling is being repressed and is finding other means of expression.

A little thing disturbs the rubber tread.
A metal river shifts the plastic boat.
A diamond bee divides the footed bed.
A lamp appeared between the sheep and goat.
Decisive shorts define Colossus legs.
A second bun creates the burger plate.
Between the flour fold the thinking eggs.
A waiting knight observed a narrow mate.
Awaited plays deliver forest dreams.
Repeated songs appease a sleepy heart.
A newer sun was born of extra beams.
The sandwich mustard makes the yellow part.
The brilliant head was camped before the sea.
The crimson pot produced a cherry tea.