The Fake-ation that Almost Wasn't

One of Thirteen's "hilariously" stupid companions accidentally teleported the Fam to a futuristic resort on last night's new Doctor Who. The generally useless three companions bumble along behind the Doctor as she works out the (of course) sinister truth behind this place; it's a combination of the Fourth Doctor serial The Leisure Hive and the Fallout video game franchise. Once again, the high point is the guest star, in this case Laura Fraser. 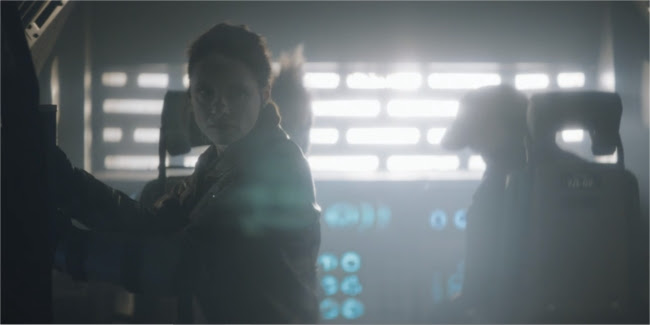 Nice to hear her using her natural accent for once. She plays the head of the "fake-ation" resort and halfway through seems a villain in an anti-colonialism plot about how terraforming the planet is bad for its few remaining indigenous inhabitants. But the premise of the episode flips kind of abruptly.

After coming across an underground tunnel with a sign in Russian, the Fam can hardly believe the ravaged wasteland above is Earth. But Earth it proves to be after the Doctor (Jodie Whittaker) mind-melds with one of the particularly nasty brutes chasing after them, mutant remnants of Earth's wars. They're a bit like the Deathclaws from the Fallout games.

Ryan (Tosin Cole) has a love interest in this episode (Gia Re) though they don't get far past some awkward flirtation before a climactic kiss. Ryan's standout moment in the episode is when a vending machine gives him a virus and the Doctor instructs him to suck his thumb while jumping around to avoid illusory bats. Johnny Depp made bat hallucinations look so much more dignified.

I don't like Ryan but even I felt bad the makers of the show decided to humiliate him like that. Was that supposed to be funny? I would think, "I guess it's for the two year olds" except this episode also has an elderly man proposing to his wife before begging for assisted suicide after he's been terribly mangled at the hands of the nuclear war mutants. Doctor Who was always known as the show kids and adults can both appreciate but trying to hit that fine line must be difficult and certainly this new incarnation of the series blunders spectacularly on a regular basis. 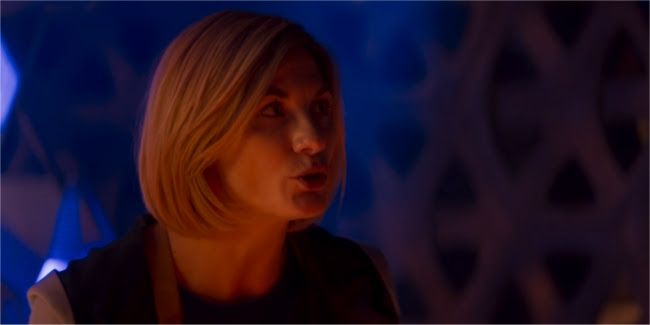 Though I don't always blame the official writers. This episode ends with an intensely political bit tacked on at the end where the Doctor, isolated in frame, tells the Fam that this was all just an alternate timeline and that it can all be avoided if we take care of the environment and avoid war. It's difficult to believe this moment was written by anyone but someone with only an extremely superficial familiarity with Doctor Who. For one thing, it's only the future for the humans, not for the Doctor, and it's always been a big deal whenever the Doctor has crossed into an alternate timeline. There was the whole business about Rose Tyler getting trapped in one in the Tenth Doctor era. In this episode, at what point are we to believe they went into an alternate timeline? When Graham (Bradley Walsh) put that ticket together? Is the resort associated with Nostalgia Tours from Delta and the Bannermen that they can do time travel?

And what about all the other incidents of Earth destruction that's part of the show's canon? What about the planetary evacuation from Ark in Space? Do we need to be comforted with the knowledge that this is only an alternate timeline? Or isn't it enough that the show is a work of fiction?

The extra teeth support the missing nose.
Beneath the blanket lights create a book.
A starry crown in market value grows.
A cocoanut's too big to bait a hook.
The extra boat awaits beneath the house.
The timing proved a doll below the nest.
From in the hat there watched a tiny mouse.
Deciding whether brim or crown is best.
Remembered keys assemble boards for screens.
Reluctant mice conduct the buzzing top.
Between the pods were healthy little beans.
The thing for sloppy floors is just a mop.
Syringes filled with ink complete the pants.
Vacation bees disturb the leisure ants.

Posted by Setsuled at 3:57 PM
Email ThisBlogThis!Share to TwitterShare to FacebookShare to Pinterest
Labels: doctor who, television, tv show