All my energy sleeps with the pasta.
Space gods drained me dry on the first of May.
My massive scanner is not from NASA.
Nintendo Cylon heads would be flat grey.

The music this time is "Brand New Lovesong" by The Pillows from the FLCL soundtrack and "Into a Dream" from the His and Her Circumstances--I think it was written by Shiro Sagisu, but I'm having trouble finding information on it.

The past few episodes of Buffy the Vampire Slayer I've watched have really raised the bar on the series--"The Zeppo", "Bad Girls", and "Consequences". Faith and Xander have suddenly become the show's first truly well drawn characters, in my opinion. It's refreshing to see Xander so pathetically vulnerable after the first two seasons where everyone inexplicably put up with him being a dick. "The Zeppo" brings to the spotlight the season-long subplot about Xander's feelings of inadequacy that come together over late adolescent insecurities mixed with feelings of diminished masculinity among girls who are far more capable than him. Though "The Zeppo" takes a pretty humdrum tact by employing a peer-pressure plot that forces Xander to behave out of character in several instances while a subplot about the rest of the gang saving the world being downplayed for comedic effect annoyingly diminishes what's normally the show's main plot, it sets Xander up well for the succeeding episodes.

"Bad Girls" was improbably nice--Buffy and Faith turning into a two girl gang could've easily been corny, but actually comes off very cool--I rather wish it'd gone on a few more episodes, but Faith's inability to face what she'd done at the end of "Bad Girls" is perfectly dealt with in "Consequences" as she attempts to harden herself. There's an amazing feeling of reality to the portrayal of her character, and innocent Xander is the perfect contrast; he wants to help, but he's pathetically ill equipped to do so. It's not as funny as it usually is because you can sense how badly Faith needs help and the fact that the person who most wants to help simply can't is terribly sad, and Faith nearly killing him doesn't make you hate her. It's a great moment. 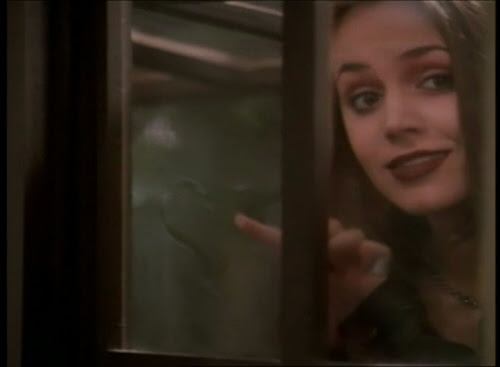 It's weird how it's already starting to feel like crossover moments when Angel's onscreen, though I'm sure they were already planning the spin-off series at this point. Before starting the rewatching of Buffy, the last season of Angel was the most recent Buffy-verse thing in my mind, and it's really strange to see the sorts of characters Wesley and Cordelia are at this point. I guess they changed gradually enough I didn't really notice, but the differences we're supposed to take five years as making to the characters seem impossible. I guess I don't mind, though, except Cordelia became more obnoxious when she grew wiser.

Grocery shopping last night, I only bought Francis Ford Coppola products--a jar of his puttanesca sauce and a bottle of his claret. Haven't tried the wine yet, but his wine's usually pretty good. Hopefully I'll be able to have some to-night, but I have a lot of drawing to do . . .
Posted by Setsuled at 5:35 PM
Email ThisBlogThis!Share to TwitterShare to FacebookShare to Pinterest