Have you told your Turkish bow about Christ?
What are they teaching you in wombs these days?
The fake text books are reasonably priced.
And provide protection from the sun's rays.

Mostly the tweets were inspired by this bit from The Knight in History by Frances Gies;

Yet the Crusaders came to admire the enemy, whom Urban had called "that wicked race." The anonymous author of the Gesta Francorum, himself a knight, wrote after Dorylaeum, "What man, however experienced and learned, would dare to write of the skill and prowess and courage of the Turks . . . ? They have a saying that they are of common stock with the Franks, and that no men except the Franks and themselves are naturally born to be knights. This is true, and nobody can deny it, that if only they had stood firm in the faith of Christ and holy Christendom, and had been willing to accept One God in Three Persons, and had believed rightly and faithfully that the Son of God was born of a virgin mother, that he suffered, and rose from the dead and ascended in the sight of his disciples into Heaven, and sent them in full measure the comfort of the Holy Ghost, and that he reigns in Heaven and earth, you could not find stronger or braver or more skilful soldiers, and yet by God's grace they were beaten by our men."

So close. I only wish his attitude seemed archaic. But delusional excuses for massacres were at least more picturesque back then.

I got a lot of reading done at the Japanese restaurant I went to for lunch yesterday when they decided to wait a half hour after I'd finished eating to bring me my check. I had this weird feeling I was expected to indicate a desire for the check in some manner corresponding to Japanese etiquette after the waitress seemed oddly impressed when I pronounced "harumaki" properly. When I finished my veggie roll and harumaki, she poured me some tea from the pot I'd been serving myself from on the table and carefully placed my chopsticks in front of me. After this, two tables near me, with people who'd gotten there after me, were brought their checks. 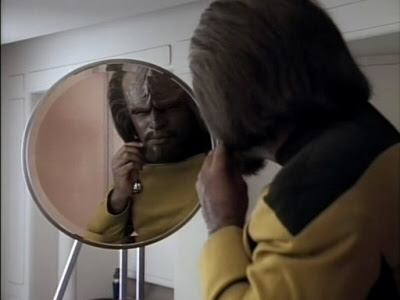 Instead of Buffy the Vampire Slayer last night, I watched "Family", a fourth season episode of Star Trek: The Next Generation written by Ronald D. Moore. It immediately follows the famous "Best of Both Worlds" two part episode where Picard is turned into the Borg, Locutus.

Hugely disappointing--I'd kind of been looking forward to the episode. I don't think I'd seen it in at least ten years, and I dimly remembered it being about things I'm more into now than I was back then--identity, and finding oneself behaving in an ugly way that clashes with self image. Unfortunately, the episode turns out to be a massive missed opportunity, mainly by putting three brief stories in an episode that really ought to have been about one--Picard's attempt at psychological recovery by returning to his place of birth. Instead, we get a tiny, sappy story about a hologram of Wesley Crusher's dead father, Michael Dorn showing off his very creepy smile and unmentioned high chair, and what might have been a complicated existential story about Picard's horror at what he'd done reduced to a few scenes of characters seemingly delivering lines directly from pitch sessions.

Apparently Wil Wheaton discussed "Family" in his blog, mainly criticising his performance and praising everything else about the episode. He also mentions disliking the "technobabble", which has actually been one of my favourite aspects of the show when rewatching it recently. People complain about it, and maybe it's just because I've read the Technical Manual, but it's marvellous verisimilitude to me. You have the feeling everything works, which you don't get with the new space opera series. Battlestar Galactica, for example, and its random introduction of things like the ore processing treadmill, always felt hazy and insubstantial by comparison.

I'm so sleepy to-day. Barely any sleep last night and I have a lot of drawing to do . . . 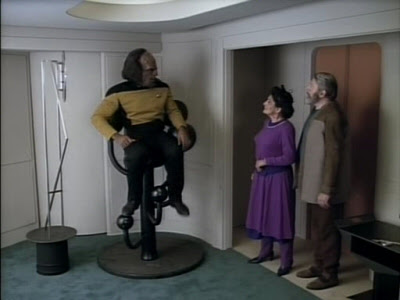 Seriously, no one even mentions Worf's big black bubble chair and his tiny but tall mirror.
Posted by Setsuled at 8:37 PM
Email ThisBlogThis!Share to TwitterShare to FacebookShare to Pinterest