Heaven is a Carrot on a Stick 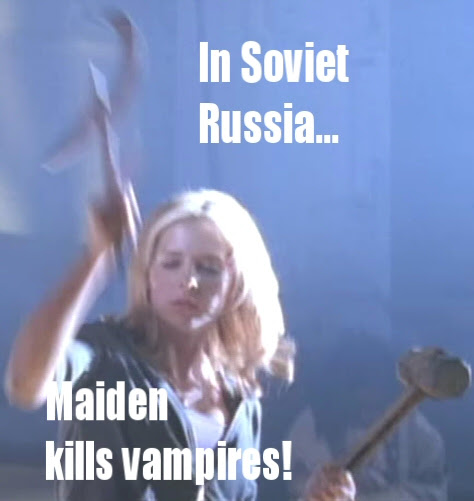 Moving from modern teen issues allegory straight into communist parable, I rather liked the season premiere of Buffy the Vampire Slayer's third season. Here it's useful to point out that a story referencing topical issues outside fantasy isn't an allegory unless it's willing to sacrifice any and everything to stay on the predetermined topic.

So we have a story of misfit, unprivileged young people getting scooped up and exploited by demonic bosses. It works because it's just bosses who happen to be demons. No conflict of interest, there--it could happen in a world where demons are real, corporeal entities. The gratuitous shots of kids on the street with soot on their faces was a little silly, though. I've seen homeless young people, they almost never have soot all over their faces. 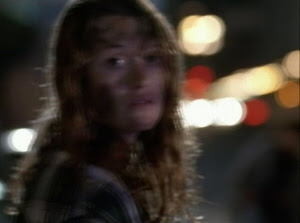 The episode also featured the conspicuously busty band Bellylove. I doubt I'd be the first to suggest they change their name to "Breastlove". 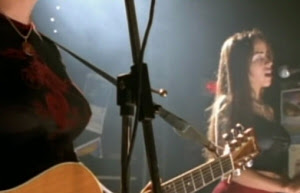 And I think Neil Gaiman oughta change his name to "Neil Fucking Gaiman" if he and Amanda Palmer get married. How obvious is it those two are together now? Jeez, they even bathe together on camera. I hope it's an accurate impression I'm getting, because they are a cute couple.

For a guy who used to talk about how he disliked the idea of being a celebrity writer, Gaiman's certainly living in a spotlight nowadays. But I guess the internet's kind of changed what living in the spotlight means--instead of a few hyped moments on Letterman, now it's constant unfiltered Twitter updates. I'm not even sure it's possible for an artist to be defined in the public eye only by his or her work anymore. Or for the work only to be defined by itself, for that matter, unless it's in no way famous. Sort of depressing, actually.

Only server loss can kill the undead.
Please don't sit noisy children next to me.
Children and zombies must always be fed.
The former have far too much energy.
Sleep deprivation works like alcohol.
Sometimes, I mean, sort of it is a buzz.
And I ricochet all over the hall.
Trying to remember where my thought was.
There's one good spinach pie plate in this town.
Most give some dry rice and soggy lettuce.
Woe to the Greek diners that let me down.
I'm human and I need to have hummus.
Don't tell me an empty vessel has food.
Now's no time for a Samuel Beckett mood.

I've seen too many people who might genuinely want this.
Posted by Setsuled at 6:53 PM
Email ThisBlogThis!Share to TwitterShare to FacebookShare to Pinterest