Whose Identity is in the Food?

A lot of these go by so fast, I think they deserve closer examination. 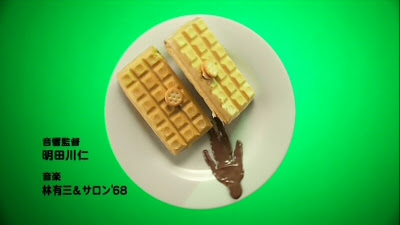 It took me a while to figure out these were doors open a crack with the shadow of a man projecting through across the floor. The spirit of sugar hesitates just outside your room. 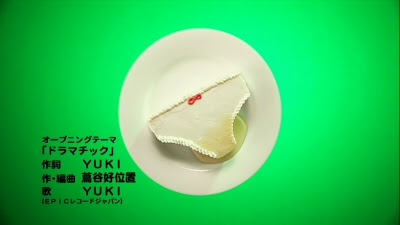 "Um, yes, for dessert I'd like to order whatever would most make me feel socially backward." Speaking as someone who generally doesn't like cake, I have to say this does actually capture cake's True Form for me--it makes me feel nauseous looking at it before I eat it and really unhappy about myself afterwards for having eaten it. 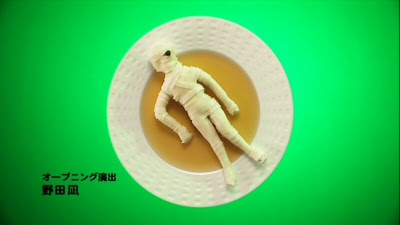 I still don't get it. Pickled mummy? 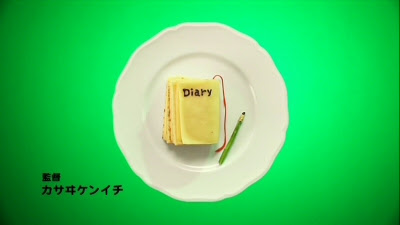 This looks like something Leland Palmer would enjoy for Father's Day.

This is all from the opening to an anime series called Honey and Clover, a josei series, which means its target audience is women, ages 18 and up. I watched the first episode this morning, and the show itself isn't nearly as strange as the opening suggests, and seems to be concerned with the lives of a group of pretty college guys living in a dorm together and this girl; 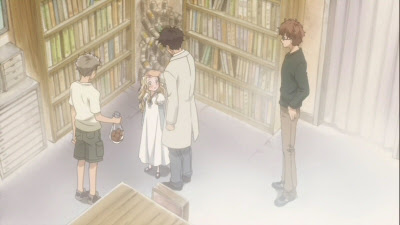 Who's, believe it or not, supposed to be 18 years old. The men in the picture are ages 18 to 24. This is not an uncommon phenomenon in anime--I'm reminded of Tenma from School Rumble and the entire cast of Lucky Star. It's played for humour in School Rumble, but a lot of times I get a weird feeling this is some kind of sly indulgence for paedophilia--"We'll cast a ten year old and just say she's an eighteen year old." Who can really argue the motives for a stylistic choice?

And yet, this is josei, and a very popular series. What appeal could this have for women? My guess would be that it completely desexualises the POV character for the audience. If one presumes there's nothing to do with paedophilia going on, then one sees the two male characters that instantly fall in love with the girl in the first episode as having only the most chaste infatuation with her beauty. The more disturbing subtext is so enormous, though, it's hard to believe it's unintentional until one thinks of something like Twilight, and maybe looking at Honey and Clover one can get an idea of what someone outside our culture sees when watching abstinence porn like Twilight.

I may need to keep watching this series, at least for a few more episodes. I really don't know if the disturbing reflections of sexual repression are entirely unselfconscious, and it might be fascinating in either case.

With dinner last night, I watched "Doppelgangland", a third season episode of Buffy the Vampire Slayer written and directed by Joss Whedon, and rather disappointing after the past couple very nice episodes--and I figured out why I enjoyed the early Whedon episodes more when I was younger; they're written with sitcom logic. In most of the early Whedon episodes, characters are permitted to lie extremely obviously and other characters will believe them for comedic effect. I'm glad there's less and less of this as the series goes on, because it really undermines the subtler character work writers like Jane Espenson and Marti Noxon are doing in the other episodes.

A small grey mob has taken the concrete.
Doozers shall change radishes to fuel.
Please tell car companies not to compete.
Shanghai Lily is on call through Yule.
Posted by Setsuled at 7:26 PM
Email ThisBlogThis!Share to TwitterShare to FacebookShare to Pinterest