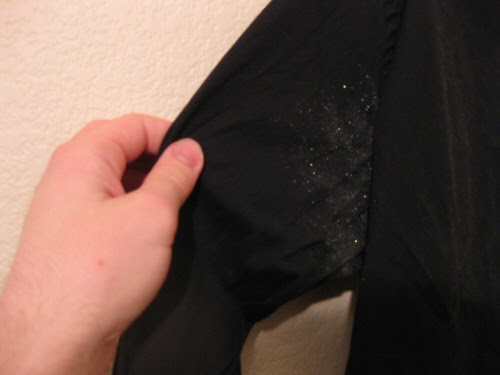 I sweat sparkles! I'M A VAMPIRE!

I came across this shirt in the back of my closet, wondered why I don't wear it anymore, examined it and discovered I'd hid it to conceal my terrible vampiric secret.

Actually, it was more like the shirt got gunk in the armpits from some strange deodorant brand and I guess the sparkles got stuck there . . . I really have no idea where the sparkles came from.

Incidentally, if you buy one Rifftones song (and they're all pretty good), I can't recommend "Sparkly Vampires" enough.

My tweets of night last;

I ought to have bought a better brandy.
What I have is as smooth as granola.
There needs to be more ready eye candy.
I'd see movies made by Mike Mignola.

Was drinking Raynal "Rare Old French Brandy". Somehow I drank half the bottle before I noticed it wasn't very good--last night was the first time I'd had a glass of it in months, vaguely feeling I shouldn't waste it.

I finished uploading the new Venia's Travels chapter and posting all the notifications of the update--on Twitter, Facebook, Blogger, Live Journal, and Online Comics--at around 1:30am last night. I don't know why I don't post updates on my MySpace. I supposed I probably should. It'd probably be more useful than posting to OnlineComics, which is usually so hosed these days I can't imagine many people casually browsing it for comics anymore.

Anyway, I really wanted to watch a movie but just didn't have time. I thought maybe of trying to watch a short one--Jean Cocteau's movies are all pretty short. But indecision was crippling. Instead I ended up just playing World of Warcraft and drinking. Not such a bad way to spend an evening, especially since I'm feeling an intense desire to just veg for a couple days.

I see a possible topless Mona Lisa has been found. Looks like even the Huffington Post staff writer is giggly about it--they're breasts, people, get over it. There're nearly twice as many breasts as there are women in the world. What mainly fascinates me is how muscular her arms are.

I guess it's no surprise that Sarah Palin's not the smartest lady in the world, but the fact that her interpretations of Letterman's jokes inserted rape and her 14 year old daughter into the scenarios is kind of an interesting reflection of the crudity of her own mind. Now Michael Steele's calling for a Letterman boycott--this is how propaganda works, I guess. Take a highly subjective interpretation of something that happened and let it steamroll through followers.

Anyway, I like Conan O'Brien, but now I'm really hoping Letterman holds the lead in the ratings. Of course, I don't actually have time myself these days to watch any late night television . . .
Posted by Setsuled at 6:55 PM
Email ThisBlogThis!Share to TwitterShare to FacebookShare to Pinterest