The Inevitability of Pretty

Pea soup for lunch makes me very tired.
So I take an apple for my upper.
But my real pep's totally expired.
My horse for your kingdom or a supper.

I capture them in empty CD spools and set them loose on the front porch. It's amazing how they keep showing up. There must be a bottomless egg sack in the sink drain or something, like the pipes in Super Mario Brothers that endlessly produce goombas.

Last night I watched "Revelations", a third season episode of Buffy the Vampire Slayer. The past couple episodes have been very good, and the show finally seems to be moving away from the Real Teen Issues Transformed! format. I think Jane Espenson is one of the main reasons--her first episode, "Band Candy", was one of the most solid episodes of the series so far. I felt more involved with the story, things felt less like a theoretical situation, if that makes sense. It was nice after the episode called "Homecoming", about Buffy and Cordelia's battle for homecoming queen, that was so awful I had to stop watching halfway through. I ended up watching part of Vertigo again instead. It's gotten so every second of that movie is utterly beautiful, every line, every delivery. Even knowing Hitchcock originally wanted Vera Miles for Madeleine, Kim Novak seems irreplaceable. I've only seen two other movies with her, Picnic and Bell, Book, and Candle. The latter's not bad, the former is thoroughly bad and self important--and an academy award winner, so that's three qualities that make it the Paul Haggis Crash of the 1950s.

I love when Wikipedia articles are oh-so-subtly opinionated, as from Picnic's article;

Although Novak's character was quietly rebelling against being thought of as "only pretty," she has nonetheless been criticized as being too passive in the role.

Yes, despite certifiably doing everything right, there are some people who think she did it wrong. I believe God was quoted as saying, "Fuck the haters."

So, yes, "Revelations" was good, and not just for this shot; 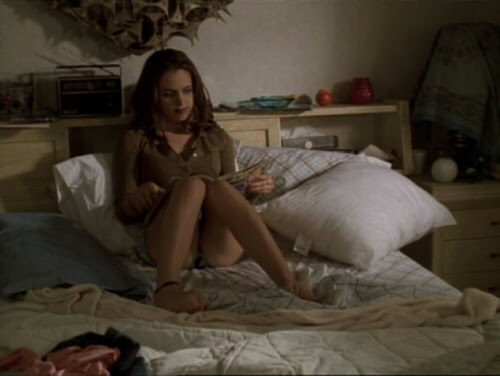 But, marone, what a nice shot.
Posted by Setsuled at 4:41 PM
Email ThisBlogThis!Share to TwitterShare to FacebookShare to Pinterest