Voyages Across the River Styx Include Free Peanuts

Harpies never do anything alone.
They'll drink boxes of tea in one sitting.
The night is as boring as a bald bone.
While an idle, hungry fire's spitting.

Last night, Sarah Silverman tweeted, "If this is real it's incredible. Worth the remote control moment alone." And she posted a link to this video;

Since it seems to be part of a series, I think it's unlikely to be real, but I find it fascinating anyway--the kid's very committed to the role, and of course, it's his or the writers' idea of what they consider believable, so it's something of an indicator of what World of Warcraft means to kids.

I had my own World of Warcraft frustrations last night as I found myself playing it an hour later than I meant to, trying to kill a certain quota of harpies near the Stonetalon Mountains. Part of the frustration was just in knowing I'm probably not going to have time to play WoW again until I've finished this next chapter of my comic and I wanted to accomplish something. I was doing okay killing one harpy at a time, but the fiends kept wanting to gang up on me. I gradually completed the quest, chipping away at it eventually by letting myself get killed by other harpies as I concentrated on just killing one. It occurred to me this might be the heart of the game--past the package and everything, this is the bit that engages in strategy for a solo player, trying to figure out how to kill things slightly more powerful than you, or obtaining a level up by other means.

I suppose matching wits against other players is more enjoyable--I've been getting more invites to join guilds lately, often from people who aren't even nearby, which makes me wonder what interests them in my humble level 24 undead warrior. So far, Tim's all the WoW society I've really needed. I haven't really experienced the joy of team coordination yet, but I think I can say at this point with some certainty that World of Warcraft isn't as good a game as Warcraft II (I don't know about Warcraft III, I've never played it).

I know I probably just sound like an old jerk who thinks everything was better in his day, but much as I was saying about Super Mario Brothers a couple days ago, I think there's demonstrably more of a game present in Warcraft II than in World of Warcraft, and I think the key factor here is the concept of levelling up.

In the classic role playing game, levelling up was simply a way to gauge the knowledge and skill a character had accumulated. But now it's kind of become something that makes computer RPGs seem like the place where the capitalist myth went to die. All around me, in real life, I see people who've worked hard all their lives for something not being rewarded at all, or certainly not in the way they desired. The world of writers, artists, and musicians is an even stronger example, as capricious subjectivity of the audience, and the unreliable preparation granted by traditional training, deny guarantees of success for hard and/or good work. Which is not even mentioning the people who give all their lives to their art and genuinely aren't good at it.

That's not how it is in World of Warcraft--in World of Warcraft, you kill a bunch of enemies, you do your quests, and you will gain experience points--you will level up, you'll get status, precious objects, abilities, and what used to be difficult will become easy.

Warcraft II--like most older video games--wasn't like that. The more you played, the harder it got, the more it demanded from your intellect. The fun in Warcraft II was in strategy, learning to deploy your units in the right locations, from the right directions, in sufficient numbers. It was probably harder to design a game like that--you'd need to figure out the right balance, decide what was reasonable to expect from a player. It probably ought to give one pause to consider that chess doesn't have level ups--it isn't a game one looks for in computer RPGs, and it's not role playing either.

I'm so tired right now. I just came back from lunch at my parents' house with which I had a glass of wine. I suppose I probably shouldn't have. I'm thinking I'll probably put off drawing the first page of the next chapter 'til to-morrow. Which means I'll probably be seeking the level up teat to-night, too. Here's what Lelia, my character, looks like right now, by the way; 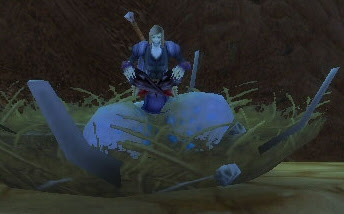 I have to admit, she's not keeping those eggs very warm.

With breakfast to-day, I read the new Sirenia Digest. The first story, "THE MERMAID OF THE CONCRETE OCEAN", strongly reminded me of another story by Caitlin, the title of which escapes me, which was about a woman and a young man who desired to know the dark secrets of the woman's past which she dreaded to divulge, and when it was eventually told, the dark secret the young man had sought turned out to be less fantastic than he imagined yet was precisely the sort of heartbreaking horror--made more terrible by its simplicity--that would cause someone to spend a life seeking ideas of more fantastic horror. The new story features an old woman talking to a young man about the motive of an artist she loved to paint mermaids all his life. Again, the root is a simple horror, that if told straight would probably hold no horror for the reader at all. So much of Caitlin's work is in creating the horror by how the characters feel about it--Dogs with really long legs aren't particular scary. The more important thing is how they disturb the people who see them. Much of Caitlin's work seems to be negotiating with the psyche of the reader to respect the sanctity of what's truly terrible*.

Following "THE MERMAID OF THE CONCRETE OCEAN" is another new Sonya Taaffe poem, which is very pretty and sweet, apparently about someone getting more than they bargained for.

Lastly, there's another story by Caitlin called "THE ALCHEMIST'S DAUGHTER", or rather a partial story. It's set in H.P. Lovecraft's dreamlands, in the city Ulthar featured most prominently in Lovecraft's "The Cats of Ulthar", and those cats, indeed, play a part in Caitlin's story. Mostly it seems to be an autobiographical fantasy with Caitlin casting herself as an alchemist's daughter engaged in experiments, attended to by a nurse in a setup not unlike her Second Life role playing relationship with her partner, Kathryn Pollnac. It's an enjoyable read, and it's nice to see another narrative perspective on Lovecraft's dream world, which was always one of my favourite subjects of his works.

Yesterday, my sister went to the mall with me to help me pick out glasses, and she spotted this fellow in a shop window; 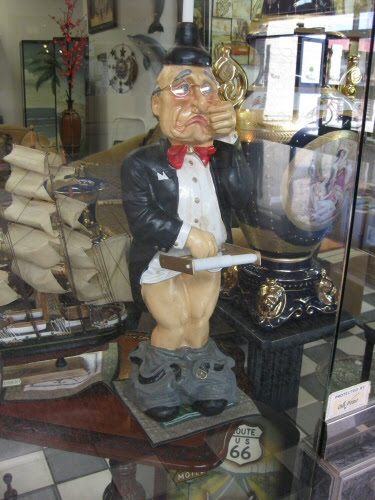 Fabulous, no? We also poked fun at this oddly anxious bust of Zeus; 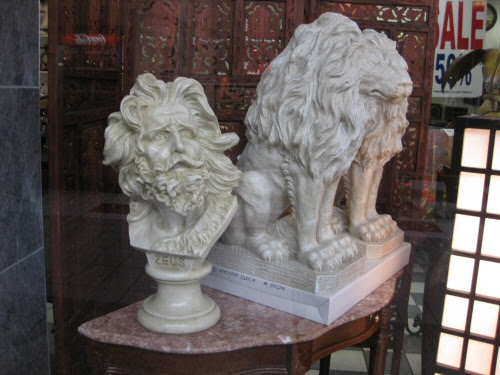 
*By reader, I don't mean the literal audience, but the hypothetical, phantom one prose addresses by existing.
Posted by Setsuled at 9:08 PM
Email ThisBlogThis!Share to TwitterShare to FacebookShare to Pinterest