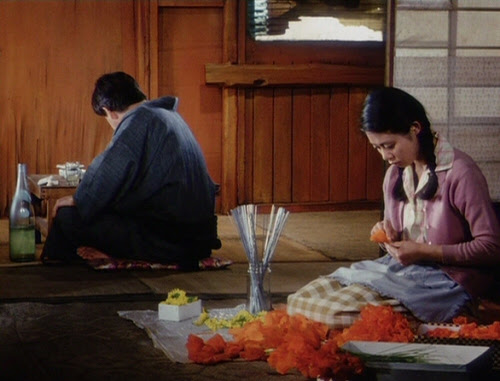 Continuing his lifelong obsession with subjective reality, Kurosawa's first colour film adopts what is for him an unprecedentedly negative view of dreams. Though for the most part, a sense of purpose and meaning derived by an attachment to illusory perceptions of the world and self is shown as essentially neutral, rendering aid or harm only due to other factors, it's also shown to be a key ingredient in destruction. 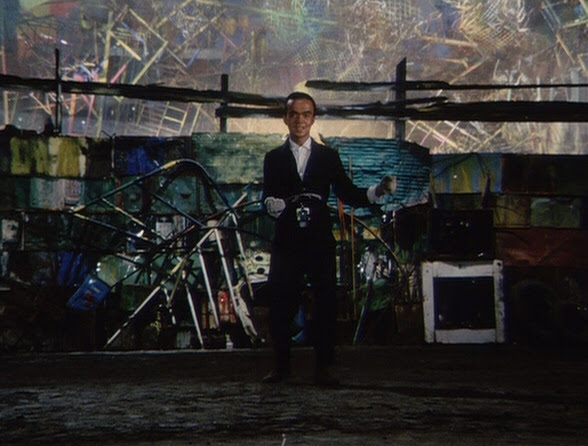 The title of the film is an onomatopoeia for the sound of a moving trolley, as is demonstrated by the first introduced of an ensemble of characters, a mentally impaired boy who leads a pantomimed life of a trolley operator. The beginning of the film shows the remarkable young actor, Yoshitaka Zushi, who had already shown extraordinary talent as the child thief in Red Beard, going through an excellent pantomime of preparing and operating his invisible trolley with such extraordinary attention to detail one can only assume the actor spent hours studying real conductors. "Dodes'ka-den, dodes'ka-den," he repeats as he shuffles through the shanty town where the rest of the film's ensemble dwell, and it's obvious the boy's imaginary train and livelihood are representative of the primary motives of all the characters--everyone's life is consumed with an invisible train, a dream fostered almost exclusively by their own imaginations.

The Lower Depths had already demonstrated Kurosawa's perspective on how the poor require illusion for survival, or the hope and self-respect required to live another day are unattainable. Dodes'ka-den highlights the disaster always just barely kept at bay by the tenuous lifestyle. 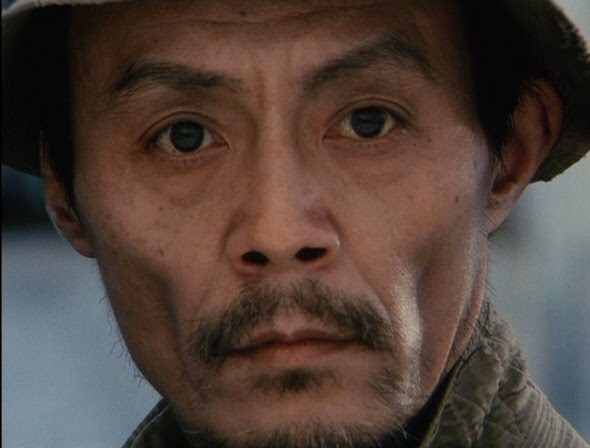 A man named Hei leads a somnambulant existence in the shanty town, never speaking and walking numbly though his daily routine, regarding any who speak to him with what one character observes are remarkably dead eyes. In one of the bold decisions of Kurosawa's fledgling colour film career, the colouring of the crude houses in which the characters dwell are all coordinated with their personalities, and Hei's is the most subdued, barely more than a mottled beige.

The lighting is expressionistic as well, as when a woman visits Hei, and her face is invariably bathed in warm yellow light and Hei's is cast in cold, subtle blue. 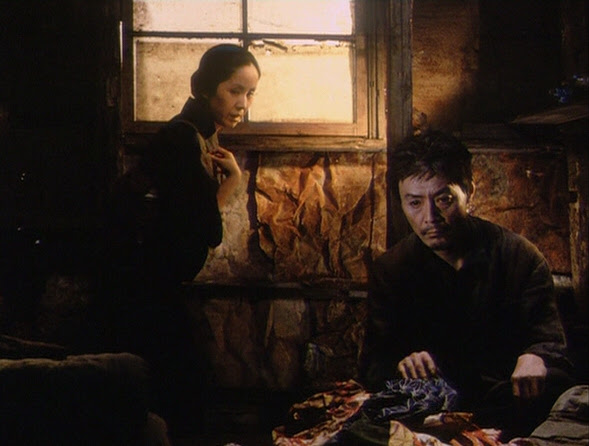 The woman speaks to Hei, and in the process we learn that she was his wife and that he had caught her cheating on him. He maintains his silence and she joins him in his silent routine, pleading for his forgiveness. But we never see any overt sign that he's angry with her--aside from accepting a meal she prepared, Hei maintains his silence and inexpressive manners until the woman decides he hasn't forgiven her and leaves. But because Hei never actually conveys any emotion or desire, the woman is forced to turn to her own imagination in order to create the scenario in which she feels it appropriate to move on, which is an instance of the imagination functioning as a means of self-preservation. 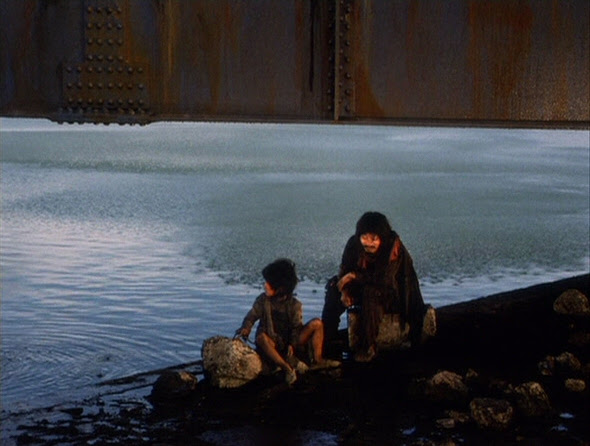 A beggar and his young son live in a volkswagen bug--the son begs for food at various restaurants in town and brings them back to his father who regularly holds forth on the tragedy of modern Japan's divergence from tradition. He's also constructing a totally imaginary home for himself and his son, which the movie shows us with dreamy, candy-bright coloured imagery. 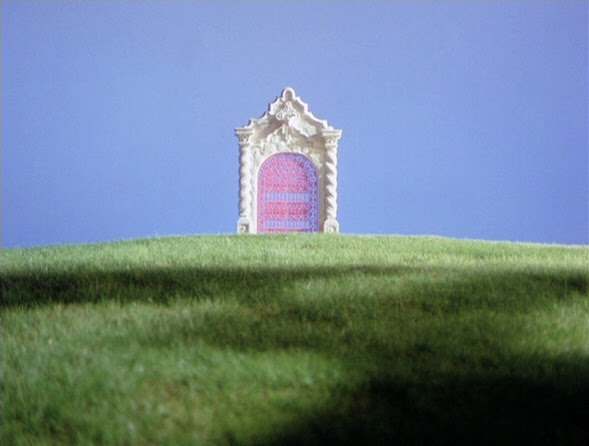 It's this plot that most exploits Kurosawa's painter sensibilities, as realistic backgrounds are totally replaced by garish painted clouds and the actor's faces, after contracting food poisoning, are painted with bold Noh white and black smudges. 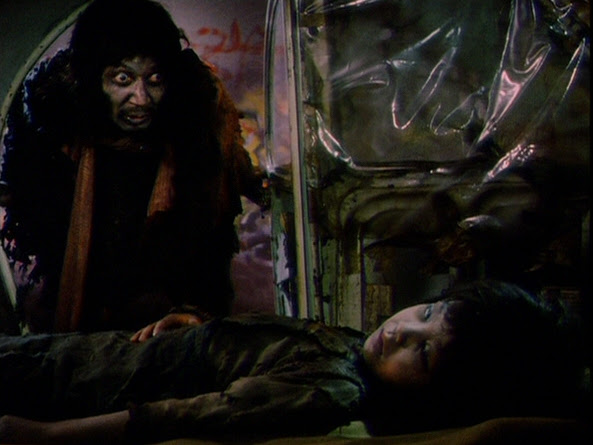 It's here perhaps that the negative quality of delusion is best shown, as the beggar's complete denial of the food poisoning has deadly results that cause his enduring fantasy of the house to take on a horrific quality.

Not all the incidences of flexible perceptions are unhappy, though--another subplot involves two day labourers who swap spouses one drunken night, and carry on normally for a few days until another night of drinking causes one to fret over the fact that the colour of the house he lives in doesn't match his clothes, an odd moment where Kurosawa's aesthetic conceit breaks into a character's reality conception.

Made a year before Kurosawa's attempted suicide, one's tempted to infer a relationship between the film and the director's mental state. It was Kurosawa's first box office failure and came at a time of estrangement from friends and collaborators, and the film was produced on a tiny budget that must have seemed even smaller after the extravagantly expensive Red Beard. But Dodes'ka-den also contains among its multiple subplots two stories that directly deal with suicide, a subject Kurosawa avoided almost entirely throughout his career, despite the fact that his older brother, Heigo, whom Akira looked up to, committed suicide when Akira was in his 20s.

Drawing conclusions about an artist from his or her work is a tricky proposition, as one has inevitably to draw such conclusions based on one's own impressions of methodology. An extreme example of the potential folly would be someone who assumes Quentin Tarantino enjoys butchering people because it's a recurring subject of his films. Extreme violence or incredible occurrences in art are often use to illustrate or satiate subtler ideas or compulsions--violence in horror and action films can serve to indulge naturally vicious inclinations in the audience who would not in real life engage in such activities due to moral considerations, and Oedipus Rex uses extreme examples of murder and abnormal sex to illustrate subtler psychological issues. 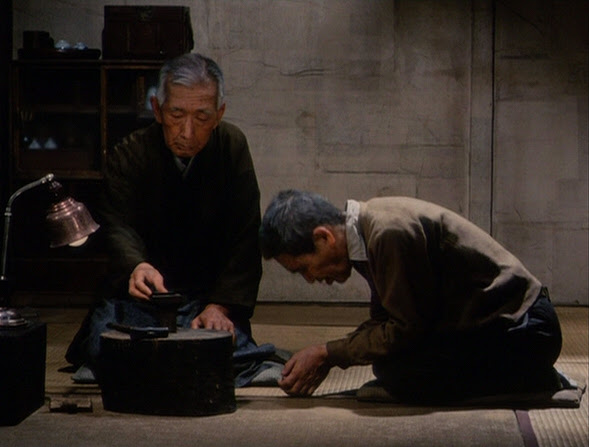 But the ways in which suicide is handled in Dodes'ka-den illustrate to me Kurosawa's inability or reluctance to touch too directly on its most significant problems. Among the slum's denizens, an old man named Tanba is portrayed as a wise figure whose two or three sentence lines are frequently taken or shown as accurate interpretations of characters and situations or solutions for them. In one scene, an old man who's having thoughts of suicide comes to Tanba seeking advice, and Tanba tricks him into taking a harmless digestive pill instead of a lethal poison. When Tanba reminds the man of the pain his friends and family will experience at his death, the man becomes panicked and wishes to live, at which point Tanba explains his deception. It's a fairly standard fictional handling of suicide, the argument that someone needs to consider the feelings of others before committing suicide, though the character phrases it in terms of the dream realities necessary for survival by stating that, in killing himself, the man damages the integrity of the dreams of those around him. Such an argument misses the point that it's often the guilt about the effect one has on others that causes or contributes to the suicidal depression. 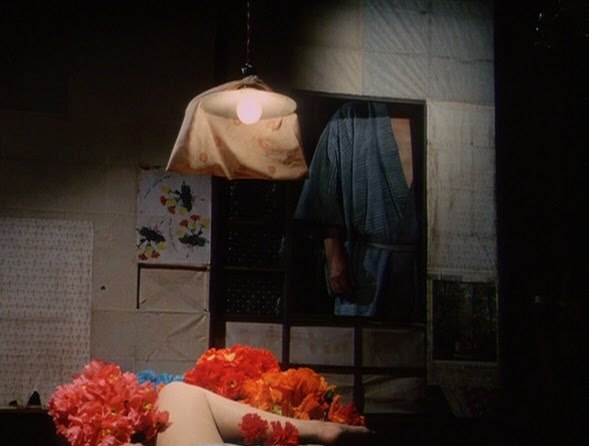 The second case of suicide is far more interesting, coming out of a subplot about a middle aged man and his quiet niece, Katsuko, who works day and night making paper flowers for the man's business while his wife is in the hospital. A sake delivery boy routinely comes by to deliver sake to the uncle and has a crush on Katsuko. He tells her to run away from her uncle, pointing out how the man spends all day drinking sake rather than helping the girl in her work. But Katsuko never speaks, and she spends most of the movie expressionlessly bent over the flowers or walking slowly through town, her head slumped.

After her uncle rapes her, there's almost no visible change in her behaviour until a few days later when a police officer tells the uncle and his wife that Katsuko's in custody after stabbing the sake delivery boy. The uncle immediately jumps at the chance to implicate the delivery boy for the rape of the now pregnant Katsuko, who'd refused to speak of the man who'd assaulted her. Why would Katsuko attack the man who'd warned her about her uncle, while saying nothing of the uncle's crime? There was a sort of Dostoevskian logic to this--it seemed at first to me that Katsuko's actions were an effort to destroy the perception that anything wrong had happened, and to this end attempted to kill the one person who had seen the reality of her uncle's brutality. He would have been especially dangerous because he'd noticed the uncle's bad nature before Katsuko was raped.

However, when the delivery boy survives and Katsuko eventually tells the police of her uncle's crime, she explains to the delivery boy that the reason she'd attacked him was that she wanted to kill herself and that it occurred to her he might forget her if she was dead, which made her angry. This is the only time she speaks in the entire film, prefacing the words by explaining she's not sure she can put how she feels into words. The extreme emotions attached to things seemingly only tangentially related to what had actually happened to her suggest a complicated web of repression and guilt in the young woman, and the conceptions of reality she'd put together to survive her unequivocally bad living situation. 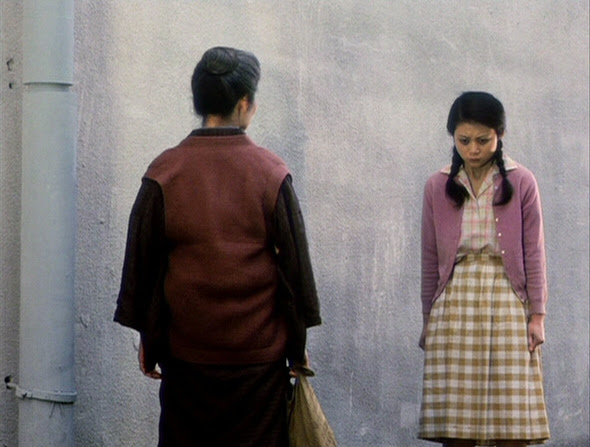 Hard not to notice the stomping outside.
And it's impossible to sleep with it.
At least werewolves will have a useful hide.
Though it's not quite keen as a nun's habit.
Posted by Setsuled at 8:48 PM
Email ThisBlogThis!Share to TwitterShare to FacebookShare to Pinterest