Five apples will usually defeat four.
Coppola's claret's better the third day.
Most cars are much too noisy to ignore.
Yet they have very little to convey.

Stayed up much too late again last night. Part of the problem is just that I'm so hardwired for the nocturnal schedule--I feel much more alert at night, even if I'm tired from lack of sleep the day before, and when I've finished eating dinner, I find myself compulsively doing random things. I almost started playing World of Warcraft, but stopped myself by saying, "If you're awake enough for WoW, you're awake enough to colour your comic." I applied the same self-remonstrance when I almost watched an episode of Evangelion and then almost started watching a movie. This was 4am, mind you.

What I did do was burn a bunch of files to disk to make room for yet more downloads, and while the disk was burning, I reached into my desk drawer and found these; 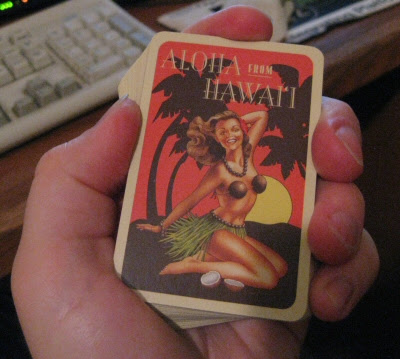 My family brought them back for me from their trip to Hawaii a couple years ago. I rather like them--they remind me of Tom Waits' "Shore Leave"--"and I bought a long sleeved shirt with horses on the front and some gum and a lighter and a knife and a new deck of cards with girls on the back." Though I guess the girl on these cards kind of bears an unfortunate resemblance to Orson Welles.

I played Solitaire while the disk burned--it'd been a long time since I'd played with real cards, though I used to play all the time in high school, usually when I was supposed to be working on something. I played twice last night and lost twice, which made me again think the computer Solitaire is rigged--I always win on the computer, and I have to wonder if a bunch of people complained about never winning so Microsoft doctored it. It would make sense to me, since I see this as a culture increasingly ill-equipped to face disappointment or unpleasantness. I guess that might be inevitable when an entire culture is in the process of uploading itself into a virtual environment--the point is it's safer, you're not actually in a room with someone where you might have to account for yourself or acknowledge you're in a disadvantaged position.

Video games can be hard, but stress is increasingly taken away from the prospect of "losing"--in World of Warcraft, death just means you need to run back to your body from the graveyard. Kids these days should try playing the Japanese Super Mario Brothers 2--released as Lost Levels in America in the collections, not to be confused with the game originally released in the U.S. as 2, which was actually a very different game. Japanese Super Mario Brothers 2 was a hard motherfucking game, and even Mario 1 was a considerable bitch near the end--unless you performed the careful trick of stomping a koopa shell from a very precise angle in world three--

--you otherwise only have a few lives before you're sent back to the beginning of the game, which means there's tremendous pressure to get the timing and coordination right with Mario's sensitive physics;

And when you did it, you really felt like you accomplished something. In games these days, I just feel ashamed the longer it takes me to beat them, and when I do, I just feel like I got what I had a right to. It's gotten so that it's often like watching a movie you need to make adjustments for, at least in terms of accomplishing something through skill. There's the beautiful virtual world to explore aspect, that games like Oblivion and World of Warcraft have. But as I was telling Tim the other day, I wish Blizzard would maybe have an unannounced "realism day" for WoW, where suddenly anyone can attack anyone, regardless of faction, getting run through would automatically kill you, bleeding would diminish your ability to function normally, characters would need to eat and sleep--maybe even include sex and pregnancy. That would be a sim. Sure, it's nice to have a game I can play while getting drunk, but there used to be other kinds of games.

Don't mistake this for a right wing philosophy. In real life, yes, I believe everyone has a right to health and the ability to pursue happiness. Real life is too precious to fuck around with. Maybe if we had more games and art with higher stakes more people would be able to appreciate that.
Posted by Setsuled at 7:14 PM
Email ThisBlogThis!Share to TwitterShare to FacebookShare to Pinterest