Some buttons will do bonus secret things.
Apple products oughta be edible.
Prefab hardware is the domain of kings.
To serfs it's sweet but indigestible.

I was looking for a target and there was Apple, smiling like a hapless hayseed, "Well, gollee, Setsuled, whatcha so derned mad about?" Nothing, you egg white, hard stale jelly, Justin Long-looking piece of shit. You . . . you just . . . sigh, okay, I love my iPod, and I don't know why I lash out like that. Sorry.

So tired to-day. It's a real Thursday. Woke up at 11am. Probably just as well since I need to start adjusting for Comic-Con. Bluuuugh, why do I need to type words? Can't you just be satisfied with warm hands smushed on the keyboard? iwaparrgrhga'l;sskl;klllllllj,nm, lenfaaaaaaaaaaflllllllllllllddddddddddd

Seriously, Apple, you make Bristol Palin look chaste--YOU HEARD ME SARAH COME AND GET ME IN YOUR HELICOPTER.

I'm kidding, Apple's not a whore.

Has anyone pointed out Sarah Palin's crusade against David Letterman might be payback for humiliating John McCain during the election? Letterman's apology to Palin came with the explanation that he was in fact joking about Palin's 18 year-old daughter who'd been used as a poster girl for abstinence only to have a child out of wedlock. Sarah Palin's point was that it was her fourteen year-old daughter who accompanied her to the Yankee game that was the setting for Letterman's joke--which was something like, Sarah oughta keep an eye on her daughter or A-Rod might impregnate her.

The problem here, assuming this isn't a payback scheme, is Palin's perspective. Of course, from her perspective, there's a big difference between her daughters. But to someone like Letterman, and presumably most of the country at this point, the specific make-up of Palin's family isn't important. The popular impression of Palin is that she's not bright and she and her family are hypocrites. I don't even think most people know her younger daughter's name. I don't. I heard Howard Stern making the same point, now that I think of it--no-one cares that much about the Palins.

So Sarah Palin, who thinks her infamous answers to Katy Couric were perfectly adequate, either has an inflated sense of her own importance or she knows that, to a certain extent, if she conveys in the media a solid confidence in her own importance, people will start to think she's important. Which reminds me of this excellent blog post by Roger Ebert I read last night about Bill O'Reilly and the proliferation of his debate tactics.

It's not just Fox News and Bill O'Reilly--there's an increasing disinterest in genuinely critical thinking in favour of combative communal narratives. I've been a target of it myself this year twice; I said I felt all art was inherently impressionistic, and people on the Something Awful forum accused me of claiming to be Claude Monet (which is just the tip of the ice berg of mischaracterisations of my work and art media in general that came up in that discussion). And earlier in the year, there was the incident on Elizabeth Bear's journal where people told me I was exercising "male privilege" for asking Bear what the term "male gaze" referred to instead of looking it up myself. It's gotten so that googling my name would lead the casual googler to believe I'm a notorious misogynist or even a sex offender.

This is, of course, somewhat troubling, but it doesn't bother me as much as one might think. Partly it's that I figure it comes with the territory of doing, drawing, and saying the things I do, which are frequently things that can be misinterpreted by lazy or simply preoccupied thinkers--one can't be expected to examine the nuances of the works or thoughts of everyone one meets on the internet, after all, and obviously there are people who are looking for scapegoats in order to consolidate social authority. It's like that line from Sin City--something like "Once you got people believing what they know in their hearts ain't true, you got 'em by the balls." Which, of course, presumes there's invariably a place in the human heart that knows better, which I like to believe, too.

Anyway, about a week ago, I came across this thread, which now comes up when my name's googled. Mostly it's repetition and expansion on some of the things that were thrown at me in the thread on Bear's journal, and pecunium was one of the especially obtuse participants--his spelling and grammar suggest to me he might not have been speaking or writing English for very long, so a language barrier may be as much a problem as any unkind intentions on his part.

Someone named commodorified commented with a quote she created for me which includes the line, "WHERE THE FUCK IS MY BLOWJOB, BITCHES?" Heh. It's another example of a device commodorified had already used against me at greater length in Bear's journal and one I saw used repeatedly at Something Awful--applying a quote to someone which, presumably, one's comrades realise is an exaggeration but also an illumination of the target's essential nature. It's only funny if you already agree, and insulting to the target, so obviously it's not very diplomatic, and works as a kind of instant propaganda for anyone new to the discussion. As Matt Lauer pointed out to Sarah Palin that her implying she didn't feel her daughter was safe in any near physical proximity to David Letterman was itself slanderous, I might point out that suggesting I was demanding blowjobs from the people I was talking to was at least as crass as my joke about saddling Bear and striking her with a riding crop to define words for me. The point of my joke was to satirise the concept that asking Bear to define something for me was in any way an act of sexual dominance, and the point of commodorified's joke was to poke fun at the misogyny she perceived in me. I don't object to the joke, I'm just disappointed by the common lack of reasoning behind it.

I wouldn't even consider the thread worth mentioning at this point, except a couple nights ago I finally read the rest of it and actually saw something good--someone named akirlu said, among a lot of other insightful things;

And what proof, what rigor, the hard sciences, and even the not so hard sciences like anthropology and sociology, are subject to that lit crit is not, is induction and the possibility of disproof. Lit crit, not unlike the Freudian theory that so many lit critters hold dear, fails the Popper test. Therefore it isn't science. And yet consistently those who adopt a lot of its concepts tend to run around applying them to things that aren't literature, and fall outside the scope that those concepts were ever intended to apply to, acting as if those concepts have the same theoretical validity as gravity, and that everyone should somehow know what they're talking about and accept the same base assumptions they have. Hell, a lot of times the crit crowd don't even seem to notice that they have assumptions. (I blame a serious lack of rigor in the teaching of Theory.) This is what I was objecting to, supra. The stunning lack of rigor and self-awareness that goes flying around the room before the lit critters and the self-styled Feminist Theory types and their various heirs do their little victory dance.

Oh boy, we beat down another Evil Over-Privileged Antifeminist. Yeah. Or not. Chalk up another failed communication.

Believe it or not, it's not just because akirlu was the lone voice of dissent in a room full of people attacking me--and she was not even necessarily defending me--that makes me like what she said. I love just the simple point that conclusions one draws about people ought to be objectively credible before retaliatory action is taken. To do otherwise is pretty much the definition of a jerk, and I should know, I've been a jerk on enough occasions. Which is probably why I can't muster much genuine hatred for my detractors--I can see too well where they're coming from. It's nice to have someone or something to snark about, and sometimes it takes a little creativity with one's own perceptions to create a serviceable target.

I guess my point is; I'm sorry, Apple.

I spent most of yesterday drawing, but I did get one get photo of The Spider by the Door when I went to take out the trash; 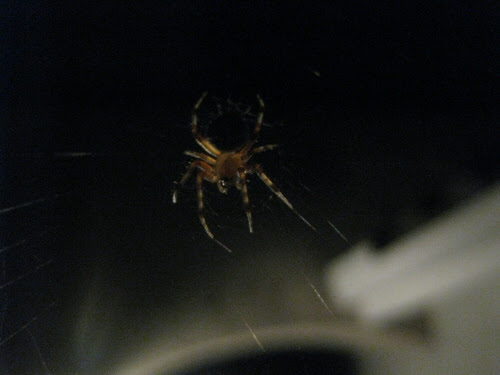 I think this is the first time I managed to get any of her web in the photo. I'm starting to develop a weird affection for that spider.
Posted by Setsuled at 3:59 PM
Email ThisBlogThis!Share to TwitterShare to FacebookShare to Pinterest