Scarecrows have subversive exercise plans.
Mongooses don't care about a nice ass.
Octopi have many attentive fans.
Lizards and cats fearlessly chew the grass.
Sandwiches are bigger at a distance.
The mosquito is the art nouveau fly.
I'll sell you bird feed for less than tuppence.
Sleep deprivation's a natural high.
Toadstools are frighteningly ambitious.
The Princess is really in all castles.
Her best apples are large Red Delicious.
Her trebuchets always outclass missiles.
On remote water lily floats a name.
B-Ko is the greatest alphabet dame.

I have almost no energy to-day. It's been kind of like this for days, though. Everything I've done for about a week has felt like an enormous pain in the ass. I suppose blame ought to lie with this completely lousy sleeping schedule. I seem to go several days with six hours of sleep at most, and then have a day like to-day where I get nine hours.

And, as is usually the case when I talk about my bad sleeping hours, I feel like I have to concede that what is unacceptable to me is perfectly fine to most people. People who look at me and say, "Really? You usually get more than six hours? YOU LILY LIVERED MILKSOP. That's more sleep than I get every night!" So, okay, good for you, all of you. Here's to you.

This past week a single glass of whiskey has been the sum total of my alcohol consumption. Lack of sleep and alcohol just don't pleasantly mix for me. I'm really glad I'm done with Venias Travels' chapter 36. I kept thinking about the Fellowship of the Ring commentary where the filmmakers complained about how difficult it was to edit the council at Rivendell. I am particularly happy with the colours I used for panels without backgrounds this time, though. Queen Lithwolna's colouration seemed to lend itself well to quite a number of bold, solid colours. I guess she turned out looking a bit Chinese, huh? Though my main inspiration for her were a number of different artist renderings of Salome.

Since I'm going now by Wikipedia's episode order listing for Buffy the Vampire Slayer and Angel, I ended up watching two episodes of Buffy in a row over the past couple nights, "Smashed" and "Wrecked". It's an interesting pair of episodes as they deal with two plots that I have almost exact opposite feelings about--I really like the Buffy/Spike love plot, and I really dislike the magic addicted Willow plot.

I'm not sure magic junkie Willow's a bad plot, it might just be my perspective. By and large, I find media dealing with drug addiction to be tiresome and silly, even pieces most people seem to think are brilliant, like Requiem for a Dream. Maybe because they usually boil down to, "Oh my god, drugs make them lose sight of everything that really matters!" To me, that's, at best, fodder for an aspect of a story, but not the focus. Maybe it's because I've had occasion to become utterly exasperated with actual drug addicts I've cared about. I kind of don't need a show to tick through every box for me again--yep, they won't get off their asses for even the things they genuinely seem to want. Yep, they'll manipulate you into feeling like you're the weird one for calling them on their behaviour. Yep, it all checks out.

Though, of course, the problem with junkie Willow is mainly that it lays the allegory on heavy and kind of suddenly. For a while it'd been people uncomfortable with vaguely possibly power mad Willow, now it's suddenly Willow who likes to get high all the time and of course that's what we were concerned about all along, right?

But Buffy and Spike--that's great. It's the closest Buffy gets to facing the fact that she has no personality, or rather, that what she thinks is her personality is a sham. I guess that's what's so sexy about it--as she and Spike are fucking so violently a house is coming down around them, there's a sense that a whole, purer Buffy has been preserved by her (or rather the writers') dogged determination to stick to the "I just want to be a normal girl" plot. Though it might not be unintentional, as this is pretty close to the character stuff that came out when Buffy dumped Riley.

I finished updating my comic stuff at around 2am. I didn't want to just dive into World of Warcraft or something, so I watched To Catch a Thief again. Gods, Grace Kelly is wonderful in that movie. Hitchcock's usual, subtly strange makeup and wardrobe for women grows on you until you can't see straight, I'll insist to anyone. Kelly's sleeveless pink top with the white curly vines and her little white gloves--oh, those little white gloves. And then, on top of it, that great Cheshire cat smile of hers. I always smile along, I just can't stop myself. On a wide screen television, with the restored DVD, Grace Kelly driving madly with beautiful Nice in the background is heaven. There's no better word for it. 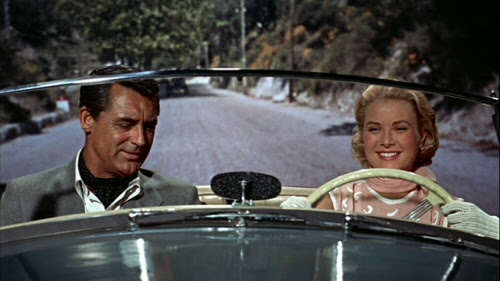