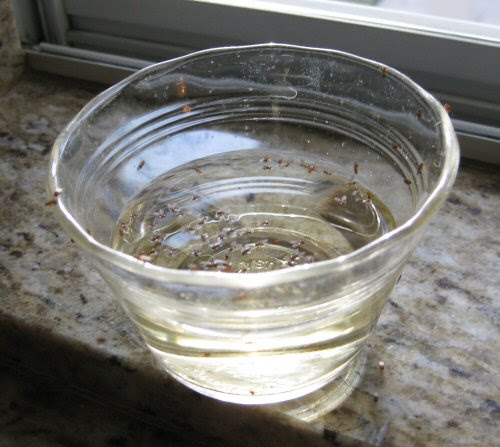 Can't believe I'm this hungry already.
I ate lunch about an hour ago.
Thin cucumbers can make plates unsteady.
There's no real food inside the Nintendo.
Forbidden spaghetti is black wires.
Baby ghosts will try eating anything.
Beware of tiny mayo vampires.
Digital spell casters do like to sing.
Neutral dead gnats are floating in white wine.
Their tiny Robin Hood went for the rum.
Spirit laws are canaries in a mine.
Drunk driving without alcohol's no fun.
Cram silent signals in a fat file.
Another sleepless day for the pile.

My mother suggested leaving out a small cup of chardonnay for the fruit flies or gnats or whatever they are and it seems to have worked like a charm. Though I guess I need to put some fresh bowls of it in the kitchen because a lot of them just seem to be swarming instead of drowning. This exercise has made white wine, incredibly, seem even more disgusting to me. I already thought it tasted like liquefied taffy.

I'm in day two of getting only fitful, three hour stints of slumber. It seems to've messed up my appetite, among other things. I ate lunch yesterday at around 11pm, even though I wasn't at all hungry. I had only a bowl of saltless pea soup, but I could barely cram it down. I usually eat lunch in the kitchen, but the insects were so bad I took the soup into my room and watched the third episode of Kimi ni Todoke while I ate.

Sleep deprived turned out to be the best way to watch the show, as some of my higher functions were disabled and I was able to get invested in the story. It's still beautifully designed and animated, too.

I have to wonder if my dislike for the show is due to psychological imperfections on my part. What bugs me is the naive, innocent hearted protagonist. Why should this bug me so much? Some people are naive and innocent, and those aren't crimes. Sawako's naiveté is over the top, as she persists in only marvelling about how she's finally making friends and just thinking about how great the male lead is without becoming aware of the fact that she's attracted to him. But cartoons are often about exaggeration. She's kind of like a humanoid lolcat.

Lolcats and cats don't bother me. In fact, I can appreciate the easy affection animals give because I tend to put a lot of people off without even trying. And yet, on occasions when I've encountered anything like that unconditional love from people, I tend to find it irritating. I find the idea of someone liking me without understanding me to be disturbing. Though I guess there are people who like that emotional distance, and I'm reminded of David Letterman's recent scandalous affairs with much younger women, and discussions on The Howard Stern Show about how this fits in with the sort of anti-social Letterman they know. It's kind of how I generally perceive relationships between older men and young women, though--two people unable to really connect with others take social roles and the power dynamics inherent in those roles as a surrogate for actual chemistry to satisfy sexual desire and the need for companionship.

It kind of puts me in the mind of the Xander/Anya relationship on Buffy the Vampire Slayer, which always seems to me a reflexively Lucy and Ricky Ricardo set-up--Anya's persistent naiveté is tolerated by Xander because she's just such a gosh darn adorable little lady. I've remarked before on how ironic it is that a woman who was once a demon committed to causing men to suffer (even though she never seems to express any opinions about men) ends up becoming a misogynist fantasy, almost a lesson book to young misogynist men on How to Handle Those Hysterical Broads.

But she's not just a fantasy for men, and Sawako, in Kimi ni Todoke, isn't meant for men at all--it's a shojo series, which means it's meant for adolescent girls. Part of what annoys me about Sawako, and other characters like her, is that I feel like there are girls watching who wish to emulate this unaffected innocence, and there are few things more irritating than affected unaffected innocence.

I'm reminded of something Rosie O'Donnell said on Monday's Howard Stern Show about how she had to learn the difficult lesson that, while Barbara Walters was a feminist icon, she's not a feminist. This became clear, O'Donnell said, when she went to a party Walters had thrown for Michael Bloomberg and all the guests had been forced to sing parts of a dopey, affectionate song Walters had written for Bloomberg. The impression I got from O'Donnell's story was that Walters is someone who's gotten through her career mainly by maintaining a certain false innocence, or keeping herself partially brain dead in the interest of implicitly worshipping men or adhering to their sense of entitlement.

And yet, a part of me still wonders if I might hate innocence too much. After all, some people worship others simply because they're that impressed. And if someone likes someone a lot, past the point of being rational, certainly they might come off as being a bit dopey. It's frustrating, because I think back to times when girls have seemed overly demonstrative of affection with me in light of how well I thought they understood me and I feel sort of ashamed about how put off I'd reflexively felt by it. Maybe they were just doing what they thought they were supposed to, maybe they really liked an aspect of me I didn't understand. I hate the idea of disliking someone just because they like me and or disliking someone because I don't necessarily agree that they ought to like me. But I guess I can at least say I was never truly mean to someone for it, though I bet I might have seemed cold.

In any case, when it comes to fiction for girls, Revolutionary Girl Utena's definitely more my speed. I watched the 12th episode again this afternoon with breakfast, and found myself loving the big feminist subtext.

This actually makes me feel very happy to think of it making an impression on young women--Utena, the girl finding her true self by taking on the powers normally given to men, the powerful male character whose destructive sense of entitlement is shown without casting him as a two-dimensional villain, and even the non-feminist Himemiya isn't shown to be mentally deficient, just having been indoctrinated into a system that keeps her down more than she realises. Utena fights for her and herself regardless of any expressed desire on Himemiya's part for more freedom, and yet Utena isn't a tyrant. This show doesn't annoy me one bit.
Posted by Setsuled at 9:43 PM
Email ThisBlogThis!Share to TwitterShare to FacebookShare to Pinterest