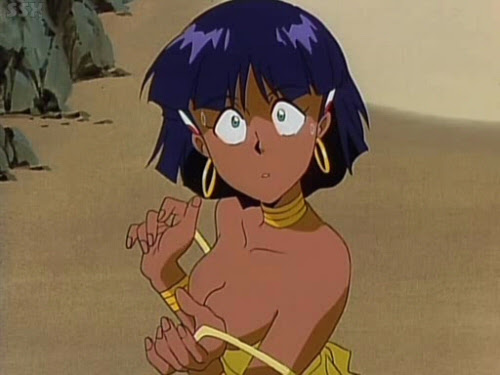 Lots of unexpected nudity in children's shows I watched while eating breakfast to-day. Here's a tip, ladies (and this probably goes for guys, too); if you're in an anime series, never, ever change clothes unless you want to be seen naked. I don't care if you're on a show aimed at preschoolers--this is one of the laws of physics in anime. And stay away from bath houses, for shizzle (cf. Gunbuster--even a bath house in space isn't remote enough).

First I decided to get back into watching Nadia: The Secret of the Blue Water, which I'd stopped at episode 11 for some reason. But Ponyo put me back in the mood for it. The concept for Nadia came from Hayao Miyazaki--the idea of a series featuring Captain Nemo and the new cast of characters around him. But the show's directed by Hideaki Anno, which is interesting, too, as Anno and Miyazaki are probably the two most influential anime film directors working to-day. A crucial difference between the two, I think, is that Anno is much, much hornier. Focus has been shifting for a couple episodes to the female characters more and more distinctly, and the accidental Peeping Tom bit was by far the best animated in episode 12.

I also watched the eleventh episode of Galaxy Express 999, which always manages to tell completely bizarre stories and somehow make them seem perfectly normal. It's some of the worst animation I've seen, but I definitely have to say that's part of its charm. 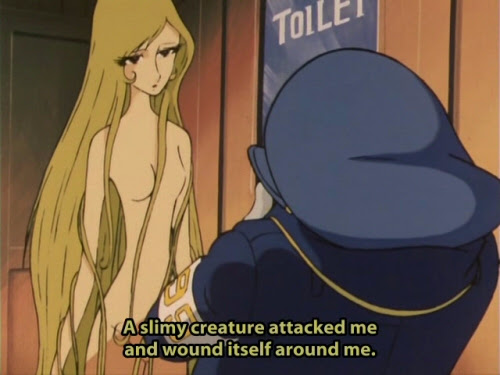 I sure love the way Leiji Matsumoto designed women. To-day's story had the 999 stop at a planet apparently made entirely of slime. A couple slime creatures sneak on board and attempt to become human by taking Maetel's and Tetsuro's shapes and stealing their clothes. 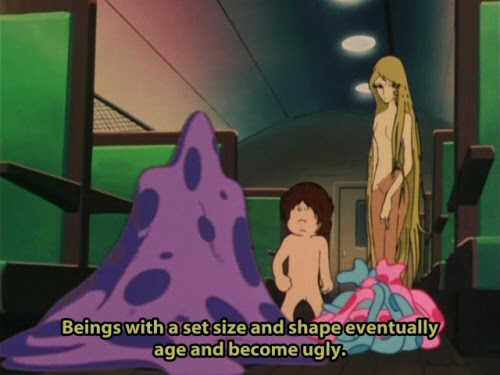 The father blob shows up to set his brood straight (or amorphous) by explaining how solid creatures diminish with age, returning the show once again to the theme of mortal melancholy. The episode has a subplot about young lovers going to the slime planet to commit suicide together. Why can't we have children's shows like this in the U.S.?

Here's a spider from a couple nights ago;

Music's by Shiro Sagisu from the His and Her Circumstances soundtrack. The song's called "Yoin' Yojou".

Don't forget tomato sauce in tin cans.
Sudden sickness might spur you off whiskeys.
Hazardous are potent good beverage lands.
It seems Jagger suggests we are monkeys.
Posted by Setsuled at 7:41 PM
Email ThisBlogThis!Share to TwitterShare to FacebookShare to Pinterest