Much ado about video games yesterday. At Tim's house, he and I watched a bunch of the promotional material for the upcoming BioWare game Dragon Wars, the best of which was this video;

That's Claudia Black doing the voice of the witch lady. It's nice to see her in something more visually interesting than Stargate again. The game also features Tim Curry and Kate Mulgrew. The official web site for the game has a free download of the game's character creation section, allowing you to make a character now and save him or her to your hard drive for use when you eventually purchase the game, an idea with an instantly recognisable multitude of merits for selling the game. Though as character creation goes, I found it a little disappointing, though I suspect most people would consider it a vast improvement on the norm--basically, it eliminates the total freedom of model editing found in games like Oblivion, The Sims, and Second Life and instead has a series of menus with sliders that looks like such freeform editing, but is really a disguised selection of pre-made shapes. This is good news if you, like most people, aren't confident in your 3D modelling skills, but it's bad news for cocky bastards like me who like to spend hours just making character faces.

The character creation demo also features what appears to be the game's prologue video which is almost a complete, blow for blow reproduction of the opening of Peter Jackson's Fellowship of the Ring film. Much of the architecture, as with Oblivion and the newer World of Warcraft materials, borrows copiously from the Lord of the Rings. And like most American fantasy designs, a lot of the game's visual style looks sort of dumpy and with only a vague understanding of how things worked in the Middle Ages. The wardrobe in the above video looks a bit Asian inspired, sort of Lineage -ish, but almost every other video I've seen features the squat, WoW-like muscleman look.

This video I found particularly funny as it features one of the designers talking about how the dwarven cities were inspired by Aztec aesthetics and the human cities were meant to look Anglo Saxon while footage of both locations plays revealing what appear to be shopping malls with a few Lord of the Rings-ish sculpted patterns.

But I'm actually more excited about this game than I've been for any upcoming game in a while. It's from BioWare, which means there will be an interesting dialogue interface with intermittently decent writing, and it looks like they won't be shy about including sex and violence. If this all sounds like faint praise from me, I should point out that I think most video game designers are among the laziest douche bags in the world. There's no reason video games can't be as visually interesting as a movie, as well written as one, and as engaging as they were seventeen years ago. I get the impression that nowadays any task for which the software won't do 80% of the work doesn't seem to the designers worth putting much effort into.

Meanwhile, I took some screenshots in Oblivion last night, which still looks a lot prettier and is more interactive than anything out there or coming soon. 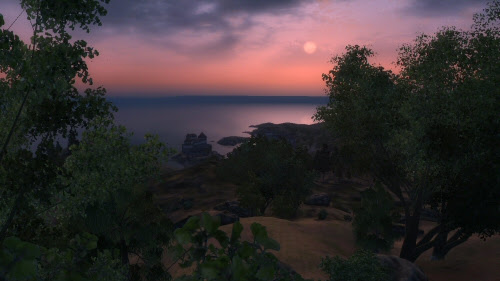 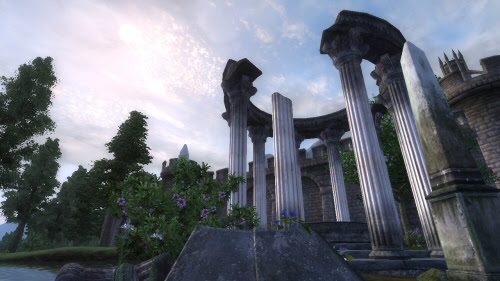 While I was playing that, Tim was playing a war strategy game that allows you to choose from a number of different countries and advance them through a number of technological ages. He was using the Aztecs and he'd advanced them to the Industrial Age before obliterated the invading Spanish. That karma had to pay off somewhere.

I also read several chapters of War and Peace yesterday. I'm in a bit just before The Battle of Austerlitz, which pitted the Russian and Austrian Emperors against Napoleon. Tolstoy does a fabulous job of conveying a young hussar's complete love and dedication to his Emperor and contrasting it with a brass who seem far more concerned with social politics than military matters. There's a real melancholy illumination of human nature in a lot of this book.

And I did play an hour of World of Warcraft last night, not accomplishing much as, in trying to reach Felwood from Ashenvale, I accidentally rode into Darkshire with my undead warrior. I rode all the way to the northern coast expecting to find another path into Felwood. I didn't. Then I swam along the coast finding nothing but a sheer wall of mountains all along the way until I ended up back in Aszhara on the eastern coast, which is where I'd started. It was a total waste of time. But that's kind of what the game feels like most of the time anyway. It's weird how the compulsion to level up keeps me playing.

Rock walls block entrance from the north ocean.
Skeleton warriors will not be stopped.
Denny's wars are all practically fiction.
The sky lunch lady serves Pacific slop.
Posted by Setsuled at 7:51 PM
Email ThisBlogThis!Share to TwitterShare to FacebookShare to Pinterest