There're no swimsuits for the real genders.
Cube worlds defy navigation by poles.
Longboats need perpendicular timbers.
Viking cats lose their trophies in wormholes.
Black holes grow fat in old televisions.
Diversions from stasis are so passé.
Deer brains break on Player One's intrusions.
A cucumber sandwich you must assay.
Food in exile grants a strange aura.
At home in the sunset clouds is Lando.
The dew's not green for emerald flora.
Night mana's in distant palace shadow.
The darkness of rich community's fear.
Void between stars is the final frontier.

Feeling a bit of indigestion at around 1am last night, I decided I needed something both carbonated and very caffeinated. So I bought a six pack of Mountain Dew in bottles. This is Tim's beverage of choice, and I gather it's sort of become the unofficial beverage of World of Warcraft.

The only grocery store I know of that's open 24 hours around here is a Ralph's in La Jolla, across the street from the Mormon Palace. You can feel the money in that grocery store--there's a whole section for pharmaceuticals with leather lounge chairs and couches. I scanned my sodas in the self checkout with the usual carefully put together college kids. I read a statistic the other day that only 46% of 19 to 24 year olds are employed in the U.S. Yet everything's so well oiled in this pocket of Ralph's spa by glimmering white Mormon towers.

Anyway, I still have a lot to do to-night. Here's a spider or daddy-long-legs from a couple nights ago I forgot to post; 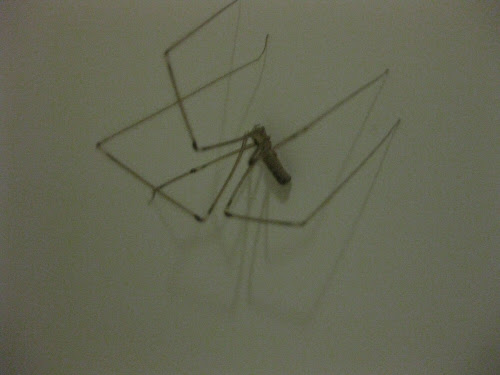 Posted by Setsuled at 9:06 PM
Email ThisBlogThis!Share to TwitterShare to FacebookShare to Pinterest