Flu keeps my scotch away with nausea.
You thought that this was Ceti Alpha VI!
Mutant soup's a can of panacea.
This desert planet yearns for genetics.

It's important to revisit Star Trek II now and then. It remains by far the best Star Trek movie, despite a number of flaws in its plot. Ceti Alpha VI, an entire planet, exploded in Federation territory and no-one noticed? Kirk really left Khan and his crew stranded on Ceti Alpha V and never thought to check up on them, or no-one in the Federation did? If you think about it, Khan's got plenty of good reasons to be angry. That he blames Kirk for the death of his wife is only a very short walk into the realm of madness.

And yet, the moment when I was reminded that this movie still totally works is when I still felt satisfied when Kirk sent over the code to lower Reliant's shields. You're still invested in Kirk beating Khan. Why? Well, it's the thematic dichotomy of the whole movie--Khan, who would have the whole universe bend to his will alone, versus "The needs of the many outweigh the needs of the few or the one." The slightly stilted dialogue, the performances, along with James Horner's incredible score all serve to bring out this fundamental struggle in a big and sort of awe inspiring way that help the space shots feel vast, I'd argue even contribute to making the Enterprise and the Reliant seem bigger. Everything in Star Trek III feels small by comparison.

The only thing that really doesn't work for me is the father/son story, but stories between parents and their offspring pretty much universally fall flat on me. Maybe it's because I reject the idea that blood relations contribute as much or more to a relationship than actual interaction. But it goes with the ideas of life, death, and age. In a way, Kirk at the end of the movie is where Khan is at the beginning--where Khan has lost his wife, Kirk's lost his closest friend, and observing the differences between how the two deal with the loss is illuminating. We know Kirk's stubborn--he refuses to believe in "the no-win scenario," and I think it's fair to say that neither does Khan. Spock twice references the influence of the "human ego", first in relation to Kirk and then in relation to Khan. So we can appreciate what Kirk's giving up at the end of the movie when he can still feel "young" even in spite of what he's lost.

Last night's spider or daddy-long-legs in my bathroom; 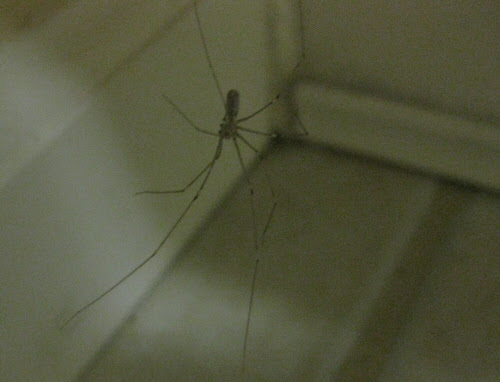 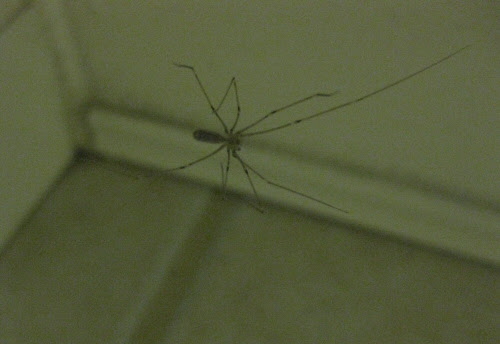 Posted by Setsuled at 8:04 PM
Email ThisBlogThis!Share to TwitterShare to FacebookShare to Pinterest