Sometimes film's a necessary mirage.
Sauron kind of only knows where you're not.
Still cars are scary in a mall garage.
If bricks were books, chimneys would know a lot.

I saw Capitalism: A Love Story last night. It was good, though I didn't enjoy it as much as I've enjoyed Michael Moore movies and television shows in the past. I think he's kind of lost the ability to be funny, and yet he still thinks it's important to try. And I'm really tired of low angle shots swirling around him with a national monument or corporate building in the background. But several scenes do make a powerful argument--workers striking when they found they were to be fired without pay they were contracted to receive, a privately owned juvenile detention facility bribing judges to wrongly detain young teenagers for years. The movie does convey the importance of restraining free enterprise, as there are inevitably people who would see to their own bottom line before the damage their efforts might cause to others.

I finished watching Othello to-day. I don't think I'll ever be able to picture Iago again without seeing Bob Hoskins in my mind. And it was a good production otherwise, I particularly liked Desdemona's costumes; 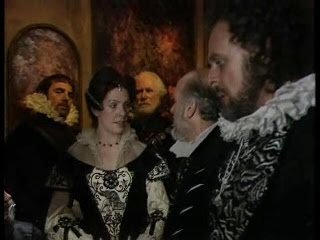 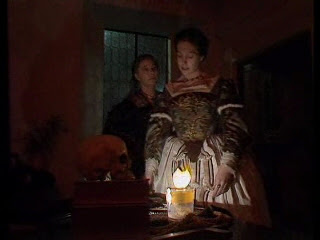 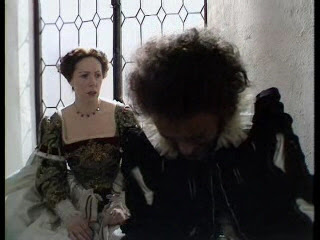 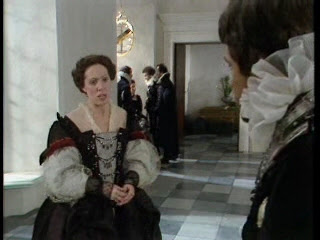 Iago's machinations, of course, are another good example of a master manipulator allowing his victims to manipulate themselves as much as possible. Othello's unbending passion for separating "honest" people from deceivers was as much at fault for the destruction of the truest person in his life as Iago's work. He loved "too well" because he was too ready to go to great and terrible lengths in the name of pure love. I think if there's any lesson one should take from this play, it's to err on the side of trusting peace.
Posted by Setsuled at 7:56 PM
Email ThisBlogThis!Share to TwitterShare to FacebookShare to Pinterest