I went to see Paranormal Activity last night--I got a real kick out of it. Only four actors appear in the film, but there are definitely five characters. The demon, the fifth character, is created incredibly well without dialogue. We learn how it thinks and the nature of its desires entirely through its actions. It's simple to say it wants Katie, but the primal, cruel, possessive way in which it wants her I think speaks to the part in all of us that cowers at the threat of terrible violence. The movie's about the control of physical abuse, and about an entity that is totally composed of that motive, lacking a physical form or any other discernable aspects of personality. It's really good, and quite a fun haunted house. 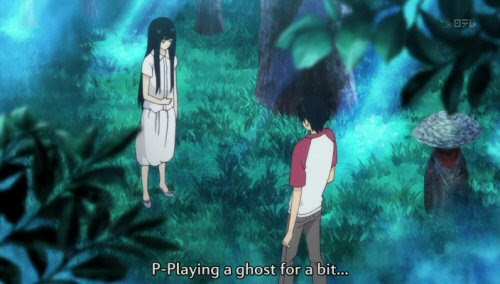 With breakfast to-day, I watched episodes of two anime series that probably couldn't be more different from each other. First I watched the first episode of Kimi ni Todoke, a shojo series so far rather typical with its plot of a socially awkward, almost totally guileless and beautiful teenage girl and her attempts to talk to the guy she likes that just so happen to repeatedly demonstrate that she has a pure and loving heart. In this case, the girl, Sawako, is made fun of for resembling the ghost girl from The Ring (and so everyone calls her "Sadako") and most people assume she can summon spirits. 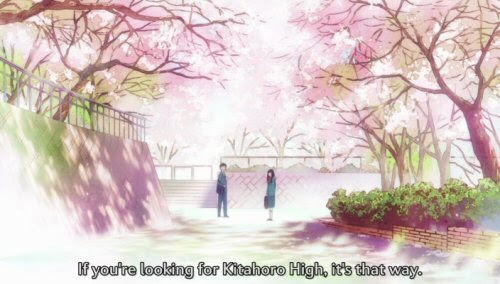 What makes this show work is that this typical story is told with some very atypically beautiful imagery. Transitions and editing are all unbelievably pretty without looking like typical shojo. It was so nice looking that the story was totally overwhelmed and I didn't mind.

So I went from a series aggressively targeting a young female audience to the third episode of Kampfer, a show aggressively targeting a young male audience. And/or possibly lesbian, because the episode tells a story of the young man who's been turned into a beautiful teenage girl and sent to school in a magically cordoned off all girls section of his high school where he's startled to find that not only are all the students lesbians, but that they're ravenously attracted to him (or her). 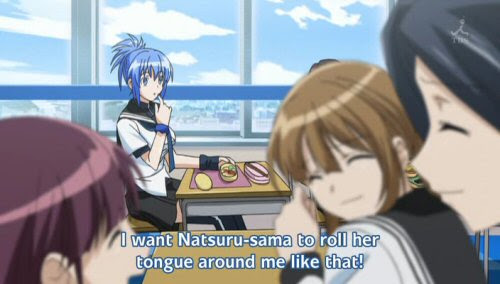 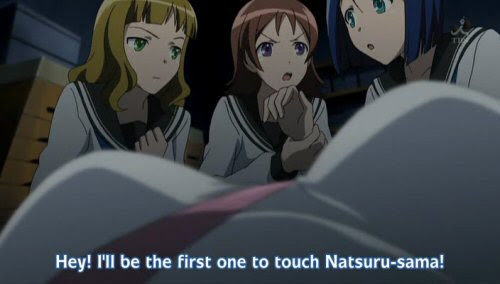 I can't imagine how boring or even obnoxious this show might be to someone not attracted to women, but I just can't bring myself to complain. I am wooed.
Posted by Setsuled at 8:25 PM
Email ThisBlogThis!Share to TwitterShare to FacebookShare to Pinterest