Sunset is almost the start of a day.
Lobotomies cut down on lots of fuss.
Pissing won't really much change what you weigh.
There is no end to the water in us.
Water won't resurrect Richard Pryor.
Spirits steal their sheets from pretty women.
Records vanish in digital fire.
Slow frost is the most pervasive venom.
Pizza's the perennial invention.
Coffee reminded me to have some scotch.
Blue letters lost in white space convention.
Took for a compass a broke pocket watch.
Battleship pushpins illustrate blind aims.
Psychos swing flashlights for sanity's planes.

That's a spider from a couple nights ago in my bathroom sink. Music is by Henry Mancini, "Drip Dry Waltz" from the Charade soundtrack.

I had a rather late start yesterday but managed to pencil, ink, and mostly colour a page and to-day I've already pencilled one. Not bad considering I didn't finish the script until two days ago, though I'd already gone over in my head three or four times what I wanted to happen in this chapter since Friday. I'd have had it written sooner if it weren't for some crap sleep nights.

Last night I watched "Waiting in the Wings", the third season episode of Angel that introduced the world to Summer Glau. Between her and Amy Acker, there're some pretty stunning necks on display. 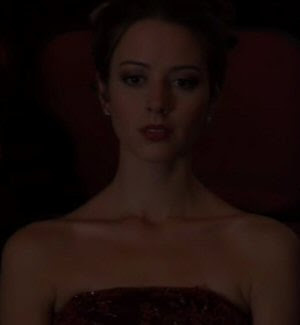 Though, and I'm no expert on ballet, I couldn't help feeling like Summer Glau's actually not that great of a ballerina. At least compared to what I'm used to from watching The Red Shoes and Tales of Hoffman over and over. But maybe it's unfair to compare her to Moira Shearer.

Anyway, the episode also had a lot of nice looking sets, nice dim, warm lighting, and nice necks. It's probably the most aesthetically pleasing thing Joss Whedon's ever made.
Posted by Setsuled at 9:45 PM
Email ThisBlogThis!Share to TwitterShare to FacebookShare to Pinterest