I can't tell you there's a wrong thing to eat.
But nations fit only the guts of Rome.
Chinese Pac-Man's nuts trying to compete.
And me, I can't get beyond Thunderdome.
No amount of dead Ents will yield a gem.
Cheap Chinese food bleeds soy sauce everywhere.
One hole in hell has a real bad modem.
Cam stonings are a tomato's nightmare.
Shadows tangle roots in black and white woods.
Spirits slip in through strange executions.
Thick cards deliver the sensory goods.
Blank screens block final programme transmissions.
Morrissey and a hillside desolate.
Good nature please leave this man with us yet.

Those last two lines are a reference to the beginning of The Smiths' "This Charming Man";

Punctured bicycle
on a hillside desolate
will Nature make a man of me yet?

Odd way to end a sonnet that began with a Mystery Science Theatre 3000 reference, I guess, but I was really hit harder than I'd have expected by the news that Morrissey was unwell and that it was part of something that had been going on for some time. I think if there's any one thing that I can point to to explain the fact that I've survived the last five years it would be Morrissey or maybe Sayonara Zetsubo Sensei. Sounds like he's out of the hospital now, at least. Jonathan Ross apparently sent him flowers and cupcakes, though I have to wonder if cupcakes were the best idea for someone in poor health.

I have a lot to do to-day, partly because I slacked off so much Friday and Saturday. Well, I've kind of set aside Friday as my "day off" in my schedule, but I really ought to've gotten more done yesterday. I've just felt really sluggish for reasons I can't explain.

Last night I watched Akira Kurosawa's Throne of Blood again, his adaptation of Macbeth. Isuzu Yamada creates a particularly gruesome Lady Macbeth with her blackened teeth, which were fashionable for affluent women in Japan at the time; 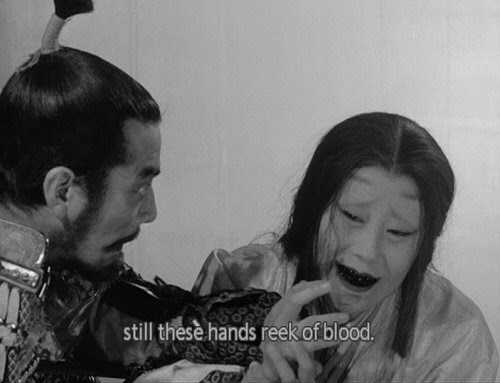 It's a movie filled with great images, though. This time I was also particularly digging the endless, tangled branches and roots of Spider's Web Forest at the beginning; 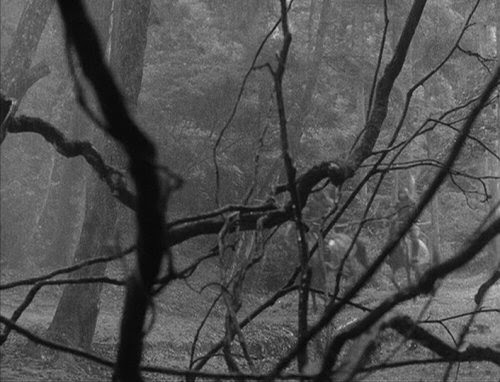 Posted by Setsuled at 9:24 PM
Email ThisBlogThis!Share to TwitterShare to FacebookShare to Pinterest