At least for to-day, I've decided The Smiths' Louder than Bombs is the best album ever recorded.

Yesterday, there was much online gaming. I spent hours levelling up my World of Warcraft rogue's lockpick ability at the home of a friend. I shall refer in this entry to my friend only as the Masked Gamer, because Square Enix forced him, like all beta testers of Final Fantasy XIV, to promise not to talk about Final Fantasy XIV. I, however, made no such promise.

The Masked Gamer is well acquainted with every major mmorpg on the market right now, as well as the entire Final Fantasy series, and he tells me that Final Fantasy XIV is absolutely awful. The only good thing about it is its beautiful graphics, but that's not enough to save it from the forced interaction with the denizens of a Final Fantasy world with their characteristic inane statements in response to things your character evidently says but you're not privy to, or its terrible battle system which the Masked Gamer says has "no redeeming value."

I witnessed this battle system in action--a cinematic of some kind of giant plant monster facing off with the determined looking protagonists and player character dissolves into a wildly different scene for battle mode--the rampaging monster is now placidly wandering aimlessly in a suddenly almost empty street at night, where the cinematic had taken place during the day. Even for a Final Fantasy game, this was a pretty jarring separation between game modes, but for an mmorpg, where the point is to see what other players are doing, locking each player into isolated instances for battle doesn't make sense. It's a single player game trying to be a multiplayer game, but it's not even a particular good single player Final Fantasy game. The Masked Gamer and I agreed that Final Fantasy games have steadily decreased in quality since Final Fantasy VI and now it seems Square Enix is just cynically exploiting the name.

I took part in an impromptu chess tournament yesterday with four other people in Second Life yesterday. I played four games total, winning two and losing two. Once again, I found chess to be a better experience when I played in the afternoon and sober. Unfortunately, I'm usually busy doing other things in the afternoon.

Last night, I drank this; 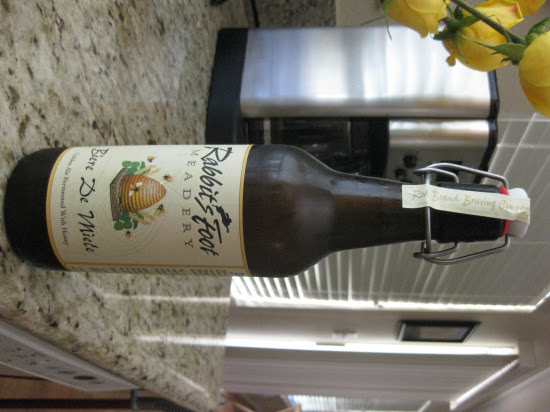 I'd had regular mead the previous two nights, Friday night was particularly wonderful. I don't think I remember ever enjoying mead as much as I did that night, I think because I managed to heat it to just the right temperature. That was Chaucer's mead.

This Rabbit's Foot stuff is a whole different animal, with much lower alcohol content, it's essentially ale fermented with honey. I drank it chilled, and while I didn't hate it, I was reminded again that I really need to stop trying to find ale or beer I actually like. It always just tastes like piss. This one tasted kind of like honey, too, though, so it wasn't so bad.

But it started beating me up just four hours after I went to bed. I got up and watched thirty minutes of The Shining while my guts settled down. Gods, I love that movie.
Posted by Setsuled at 4:09 PM
Email ThisBlogThis!Share to TwitterShare to FacebookShare to Pinterest