I've just returned from my latest trip to the dentist where I was told, after my teeth had been scraped and polished a bit, "You're not bleeding nearly as much. Which is good."

"Well, it sounds good," I said. This was a sort of follow up to the cleanings I'd gotten a couple months ago and in that time apparently my gums have mostly healed. I'm almost doing as well as my dentist would like. That's what brushing three times a day, flossing, and rinsing with extra strength Listerine twice a day gets me. My mouth is irrepressibly filthy. And I've still got seventeen cavities, of course. The head dentist still won't make an appointment for me to get the crowns, fillings, and extractions I need, as my next appointment, four months from now, is for more cleaning business. I guess I need to be really spic and span before we get serious. Or the guy got really offended when he saw I was reading The Satanic Verses and decided the Christian thing to do was to leave my teeth to the wolves.

It was strange. I sat in the chair with my usual dentist sitting nearby, waiting for the head guy to show up, and reading. He came in the room, greeted me, and asked me what I was reading. "The Satanic Verses," I said.

"They're okay. They're a bit like William S. Burroughs."

"Ah, let's have a look here." He looked at my teeth, said goodbye, and I didn't hear a word about my cavities. At least this means I'll be able to eat like a normal person for a few more months, but I really would like to get this over with.

Twenty six pages into The Satanic Verses and I'm finding it's not a bad book, though also not hugely exciting. I'm finding it sort of insightful at times--I particularly liked this bit, when two characters are falling from an exploded airplane at the beginning;

Let's face it: it was impossible for them to have heard one another, much less conversed and also competed thus in song. Accelerating towards the planet, atmosphere roaring around them, how could they? But let's face this, too: they did.

Which neatly seems to say something about the human need to find meaning in existence and argue with one another about it. Stuff like that I like, but I also find the book's sort of ironic distance from its characters a little tiresome. I guess one aspect might not be able to exist without the other, though.

Modavia Fashion Week is going on right now in Second Life, so I went to check it out last night. I saw a lot of pretty avatars, a few utterly grotesque avatars, and picked up a lot of freebies. All the stuff for sell was ludicrously overpriced, of course, especially considering most of it looked like shit. I found a sandbox and tried on a bunch of the freebies. This is supposed to be hair; 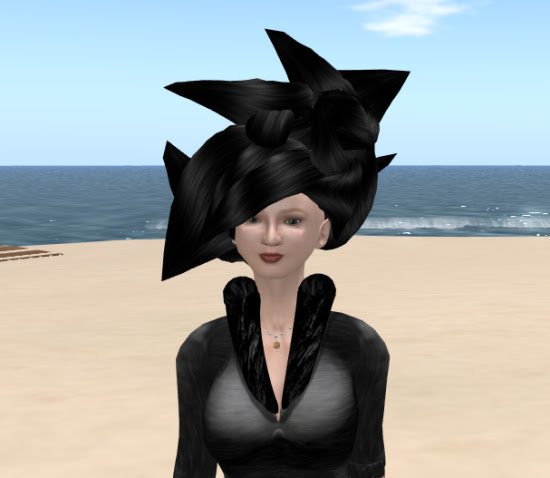 Yes, hair, not a hat. I guess it's Dragon Ball Z chic.

These shoes by a designer called Anuda weren't so bad; 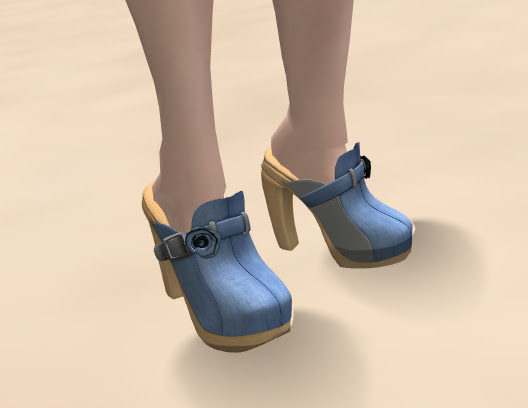 And there's nothing really wrong with this dress by B! Fashions; 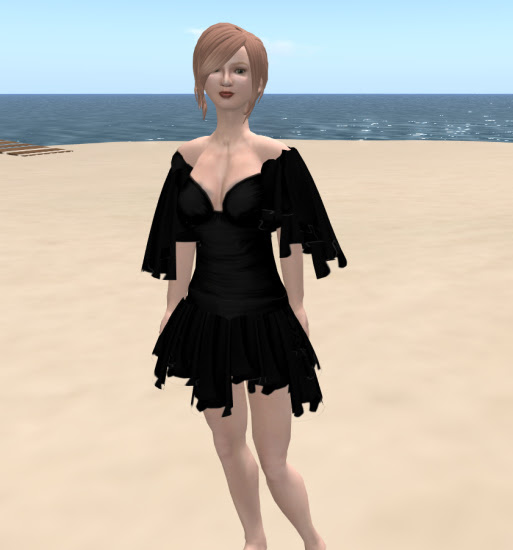 It gets points from me for not having glitch pants, but I see the future as being in more prims--bodices that look like body paint just don't cut it for me anymore. Dig this full prim bikini by Bare Rose; 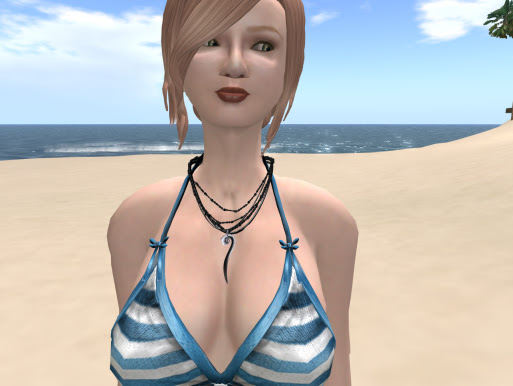 No awkward little texture zigzags--it actually looks like an object separable from the avatar. How come Bare Rose can do this with a cheap, 150l outfit while fashion big shots at Modavia are charging 600l for whole outfits made of textures?
Posted by Setsuled at 5:14 PM
Email ThisBlogThis!Share to TwitterShare to FacebookShare to Pinterest