I saw two ducks on the lawn of my parents' house yesterday--apparently two of the three I saw wandering into the neighbourhood a little while ago. My parents' have left out for them a little trough of water.

I'd accumulated six stale hamburger buns, so I took them to the river to-day where they were all quickly gobbled up by the duck mob. 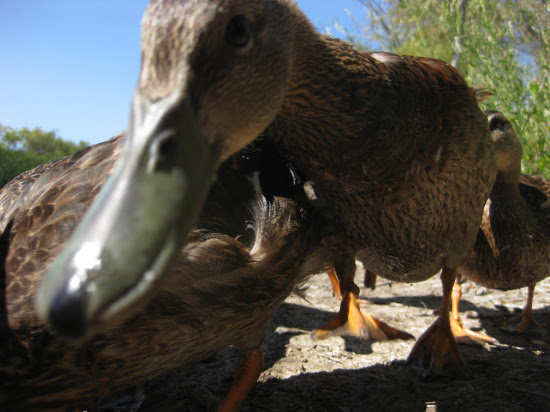 It was insanely hot to-day--I got tired just stepping outside. The ducks were crowding together under a few trees when I found them. When I finished feeding them, most of them immediately commenced to furious drinking. 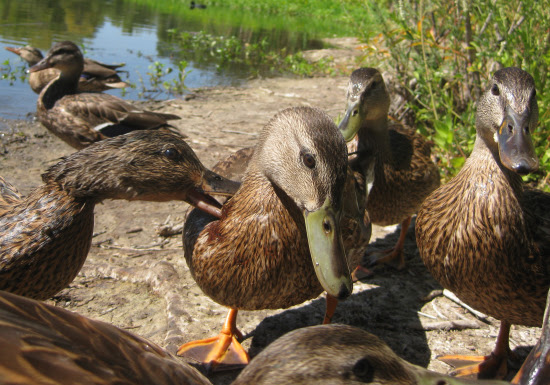 I'd been nursing a viewing of The Two Towers extended edition for about a week. I'm noticing more and more Peter Jackson's peculiar affinity for close-ups. There was a team of wonderful artists and craftsmen who made beautiful sets and costumes, yet most of the movie seems to be people's faces. This isn't necessarily a bad thing, though I often think how nice it would be to see a version of the films with long takes of people from distances, to drink in the environments a bit more. Though of course that would probably turn the more than 12 hour film series into something like 72 hours.

But it's something I think about when I think about whether Tolkien himself would like the movies. Before even getting to the changes made from the books, or the special effects, one has to consider all the stylistic mannerisms of filmmaking that we've become accustomed to that would be quite jarring to someone of Tolkien's generation, not only the copious close-ups but the continuous, rapid cutting, the iron fist of the modern filmmaker on the perspective--always firmly telling you to focus on this or that.

I enjoyed the movie quite a bit--it's held up for me better than I thought it would. Drinking some Grey Goose vodka helped, too, I suppose--I bought a bottle on Friday when I discovered somehow Grey Goose has gotten to be as cheap as Absolut. Which was weird, as I always thought that Grey Goose was the creme de la ethanol. It was certainly still insanely smooth last night, I can tell you. 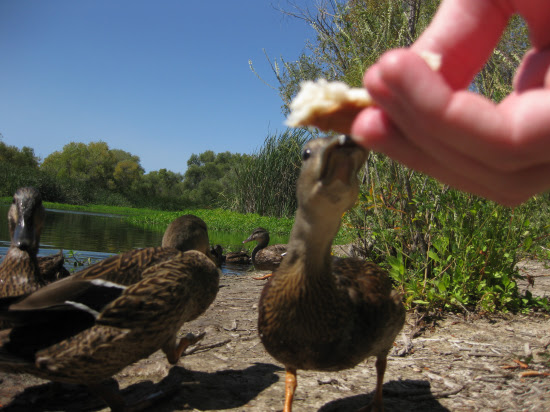