I watched the first episode of Boardwalk Empire last night, HBO's new mob series, set at the beginning of Prohibition. The first episode was directed by Martin Scorsese, which was the main thing that drew me, though I suspect a lot of the audience for the premiere are fans of The Sopranos, as it was written by Sopranos writer Terence Winter and features several Sopranos cast members--not to mention the similar subject matter.

I've never seen The Sopranos, but so far Boardwalk Empire features a lot more mobster tropes than I ever would have thought Scorsese would use. The idea behind Goodfellas was to show a more realistic impression of the Italian mafia than the romanticised versions in films like The Godfather. Boardwalk Empire feels much more like The Godfather than Goodfellas, complete with clean, beautiful sets, costumes, and cinematography and a sense of fantasy gangster nobility.

Steve Buscemi is great as the central character, Enoch "Nucky" Thompson, based on a real life politician and gangster. He comes off sort of like a smarter and more collected James Cagney character, but it's the most casually ass-kicking character I've ever seen Buscemi play.

The comparison between this show and gangster films of the 30s got me thinking about how much more fun those movies were than modern, doggedly sombre entertainment, but just as I was thinking this, Boardwalk Empire gave me a nice, delightful little sex scene. Reminding me of a scene from Fargo, I've concluded few actors can make realistic looking coitus on film as nicely silly as Steve Buscemi.

But Nucky's budding infatuation with a poor, morally pure Scottish immigrant played by the beautiful Kelly Macdonald leads us back to romanticised territory. Obviously here to make us feel sympathetic to Nucky as well as to establish one of the easily understandable appealing aspects of being a gangster, as we see Nucky have her abusive husband killed for causing her to miscarry. I couldn't help thinking of the scene in Goodfellas where Henry pistol whips a guy for hitting Karen, which is far more of a piece with that film's dirtier take on a life often negotiated with violence.

But as a fun, romantic take on 1920s mob, with a slightly sombre side, Boardwalk Empire starts okay and gets better about halfway through the episode. Thank the gods for HBO that provides us with television shows with sex and ultraviolence. I particularly liked the bloody update on the wacking of Big Jim Colosimo, still reminiscent of the scene from the 1932 Scarface. 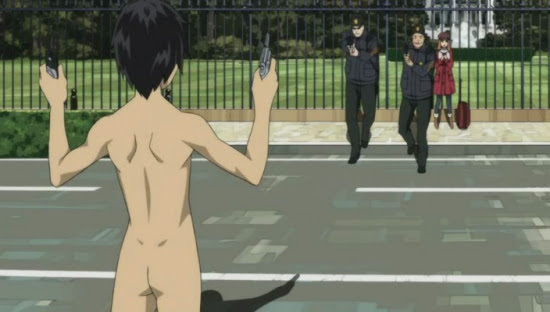 With breakfast to-day, I watched the first episode of Eden of the East, a nicely abnormal anime series from last year. You know it's not your standard shonen series when it begins with the male lead naked and cheerfully waving a pistol and cell phone at the White House. What follows is a cute, somewhat Hitchcockian boy and girl chased by government/criminal agents suspense story. And surprisingly grammatically correct English from American characters on the show, instead of the usual almost totally senseless strings of English words used in Japanese pop music. 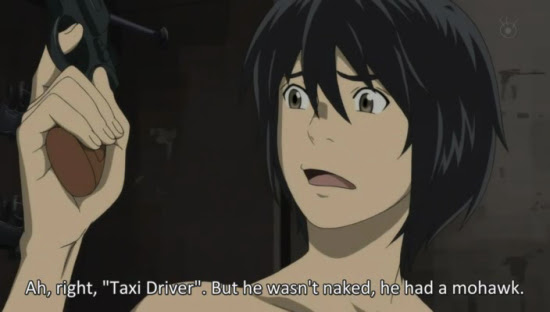 Posted by Setsuled at 4:27 PM
Email ThisBlogThis!Share to TwitterShare to FacebookShare to Pinterest