After months of losing, I finally won a chess game a few minutes ago. 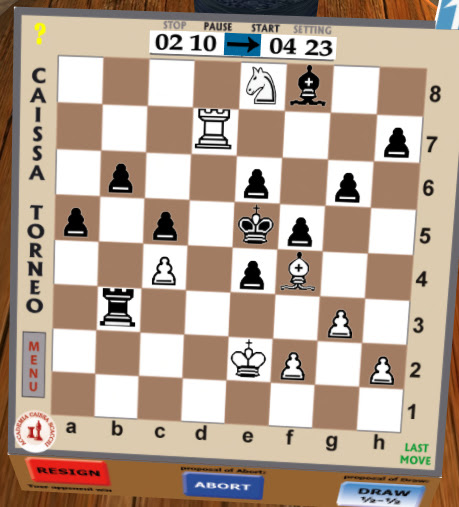 I was playing white, and my final move was the Bishop from e3 to f4. I'd completely expected to lose until that moment. I suppose the fact that I seem to have little strategic foresight may be part of why I don't generally do too well. The guy I was playing against, to whom I almost always lose, had worked hard to get one of my Rooks early in the game--he was able to make inroads with his Queen and Knight when I castled on the Queen's side. After a lot of careful manoeuvring, he forked my Queen and Rook with his Knight. Then I got lucky when he moved the pawn from b7 to b6 to protect his c5 pawn, accidentally leaving his Rook on a8 open to a Bishop I had on g2. And since he'd sacrificed his Knight to get my Rook, and my Bishop escaped the operation unscathed, I had a good leg up after that, all due to that stroke of luck. Even so, as you can see his pawns were advancing across the field.

This could all just be karma from when I helped an old lady load water bottles into her cart at CostCo. I was at a CostCo in another part of town, where they had Glenlivet for twenty dollars and big bottles of Grey Goose for thirty. I only wish I'd had more than two dollars on me. I was noticing there were a lot more pretty, young female employees at that CostCo than at the one nearer to where I live. More pretty girls in general, actually--I saw one girl crossing the street with a really strange walk. I've never seen someone with less bounce in their step. If a big, Warner Brothers brush had painted over her legs, her torso would've looked like it was being dragged across by a mouse cursor.

The music where I play chess isn't as good as it used to be, so I've been listening to my own randomised mp3s and flacs. These two songs came on next to each other and seemed oddly appropriate to-day;