I saw the trailer for Joel and Ethan Coen's True Grit to-day;

I've never seen the John Wayne movie, which was adapted from the same novel, but it sounds like the Coens' version is going to be based purely on the novel, rather than attempt to be any sort of remake of the earlier film. I've no particular desire to see the 1969 movie, though I do like John Wayne. It sounds like that movie shifted the focus to Wayne's character, while the book, and the Coens' movie, is more from the perspective of the young girl. Which sounds like a much better story to me. Maybe it's because the 1969 version to me sounds like the film adaptation of League of Extraordinary Gentlemen, which also shifted the focus to a male character when a prominent star was cast in the role.

I watched a lot of second episodes yesterday; Boardwalk Empire, Sym-Bionic Titan, and the second episode of the new season of Venture Brothers. They were all good. The first two were concerned with employing well worn genre tropes for new, sincere stories while Venture Brothers of course used such tropes for parody--most prominently, in this case, the alien arena episode, where heroes and villains are forced to fight and eventually work together when some other, powerful third party imprisons them. Venture Brothers never takes it seriously for a moment, and the thing never quite seems to get off the ground, as all the would-be gladiators are quickly distracted by immature squabbling or imperturbable bloodlust. There was also a good subplot about Dr. Venture being blindfolded and interrogated by Teddy Ruxpin.

The new Sym-Bionic Titan managed to be vibrant with the old "secretly alien family moving into American suburbia" setup, mainly because the characters feel so realised. My favourite bit was the robot confronting a realtor exiting the restroom, preceded by a toilet flush sound effect, to ask him, "What were you doing in there?"

And there was nothing particularly original about Al Capone beating the shit out of a reporter in the new Boardwalk Empire, but it was very fun, especially as the guy playing Capone has those short, beefy limbs that seem to be on spring hinges.

I also liked the Odysseus and the sirens burlesque show; 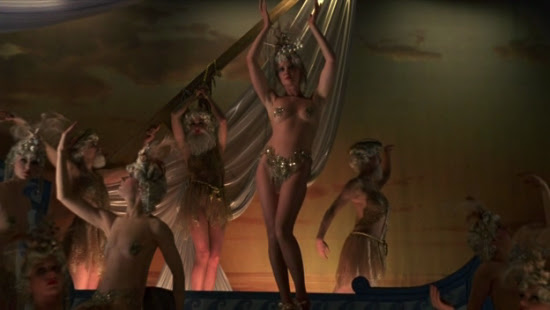 I love how Odysseus is played by a girl in a false beard, though I feel like the character would've been more likely referred to as Ulysses in the early twentieth century. I don't actually know, though. 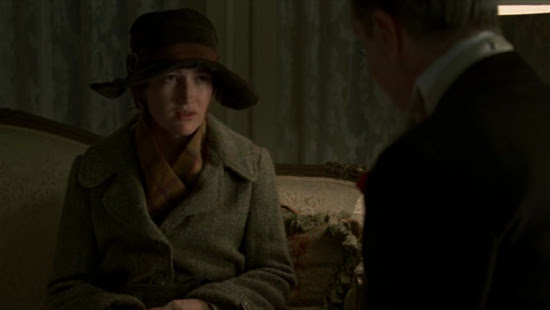 I guess Kelly MacDonald is supposed to be playing an Irish immigrant, which was actually what I thought at first before reading her Wikipedia entry and realising she was the dame in Trainspotting showing off her teeth in all the posters, and I wondered if I maybe didn't have as good an ear for accents as I thought I did. I kind of hoped, too, as I was a bit put off by the tired cliche of the Irishman beating his wife--now, a Scotsman beating his wife, that's vaguely exciting. But, nope, she's supposed to be Irish. She must be really good with accents, because she also played an American in No Country for Old Men, which I guess brings us back to the beginning of the post. To tie it all together; I was referring to Sean Connery in the The League of Extraordinary Gentlemen adaptation, and Sean Connery's a Scot who beat his wife.
Posted by Setsuled at 5:25 PM
Email ThisBlogThis!Share to TwitterShare to FacebookShare to Pinterest