There's been a thunder storm here all day. At lunch time, I went into the backyard during a brief rain lull and watched this snail trying to get somewhere.

Music's by Gheorghe Zamfir, which makes this another one of my videos blocked in Germany. Sorry, Germans.

I thought some good old fashioned alcohol would help my jaw ache, if it really is due to stress, but all I had in stock last night was tequila, vodka, and rum--it'd been weeks since I'd had any whiskey, and I suddenly found myself powerfully in the mood. I decided to go to CVS and get either some Jameson or some Wild Turkey, whichever one was on sale. Wild Turkey was on sale for 16 dollars, but then so, I saw, was Bushmills, for 14 dollars. I'd never had Bushmills--Jameson's been my only experience with Irish whiskey--and I was a little intrigued to try something dating back to at least 1608, within Shakespeare's lifetime.

Incidentally, double checking to make sure I was right about the year of Shakespeare's death, I noticed Wikipedia has an entry separate from the main Shakespeare entry for Shakespeare's life. It's not even a very big extra entry.

Anyway, I found I really like Bushmills. It's not as sweet as Jameson, there's something, I don't know, minty about it. Though I wonder if this is a childhood preconception about the Irish infecting my taste buds. According to its Wikipedia entry, from an uncited source, Bushmills distillery may have been making whiskey as early as the thirteenth century. It's nice to think I may have found another taste of the Middle Ages. 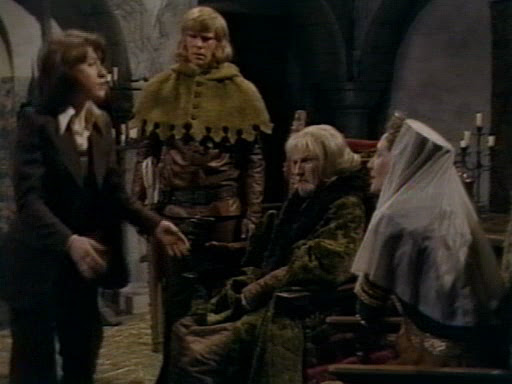 And speaking of the Middle Ages, I'm already three episodes into "The Time Warrior" Doctor Who serial, with which I was at first absolutely in heaven--costumes, props, and environment being extraordinarily period accurate. There are even pageboy haircuts on the men, something you see less and less of in new Medieval movies. Though the wigs certainly aren't great, especially on a serving wench in the third episode. But the main disappointment is the inclusion of a "civilised" King, who refrains from killing his enemies' men if possible (despite apparently being vastly outnumbered). The King also seems to quickly rely on the Doctor overmuch--he needs the Doctor to tell him his enemy will probably attack again after they've been temporarily repelled by stink bombs. Sometimes the main thing separating Doctor Who from Sherlock Holmes is that Holmes exists in a world where he's smarter than everyone and the Doctor exists in a world where everyone happens to be dumber than him.

But that still doesn't bother me as much as the civilised faction. And I realised it's too often like that, whether it's UNIT or the Thals or a futuristic Earth government, there's often "good guys". It seems like there was less of that with the first and second Doctors.

I've watched quite a lot of Doctor Who since I last talked about it, I guess. There were certainly many good moments, and I loved seeing the first two Doctors again in The Three Doctors, though it made me feel a bit cross-eyed. A part of me really resisted the idea of discerning the Doctors as separate characters in any way. But I did enjoy the cattiness between 2 and 3.
Posted by Setsuled at 4:51 PM
Email ThisBlogThis!Share to TwitterShare to FacebookShare to Pinterest