The Heart of the Realm

I've some freshly augmented teeth--a bunch of fillings in the upper right teeth, after a bit of sanding. There's nothing quite like the smell of your own burning teeth.

Before her manager and boyfriend, Evan Seinfeld, came in the room, Lupe had not only spilled the beans directly that it was Robert Rodriguez, but mentioned screening Machete in Rodriguez' home. But if it's not Robert Rodriguez, it's certainly a good imitator, and anyway someone with a talent for fluid action editing even when he's obviously just goofing around. And I love that the "pooosey" is a mysterious briefcase with a bizarre sex symbol on it.

It actually kind of reminded me of El Mariachi, with its progression of tight, low angle shots--by seeing this stuff in such a plain state, it makes me kind of feel I've started taking the technique for granted in its polished form. It's also interesting to see some of the goofy, S&M sexuality characteristic of so many of the grindhouse films Rodriguez and Tarantino emulate but is mostly absent from their films. Machete has a few self consciously gratuitous sex scenes, but they still feel a little unwieldy.

Hey, I found a word that doesn't immediately sound like a sexual pun here, like "stiff" or "rigid".

Speaking of some sexual rigidity;

I watched the English version of The Blue Angel last night--a German film, but as it was produced in the early days of sound films, there was a desire to preserve the greater exportability of silent films, and in this case it was done by producing simultaneously an English and German version of the film. But the English version still feels very German, as the English spoken is explained by having Professor Rath (Emil Jannings) be an English teacher, and Lola Lola (Marlene Dietrich) be an Englishwoman, but they're still surrounded by Germans and there are stretches of untranslated German dialogue, though actually the movie features very little dialogue altogether. I never felt particularly lost, because the story's told almost entirely with visuals, probably because director Josef von Sternberg earned his chops making silent films. The movie's filled with the beautiful, famous Expressionism of German film in the 20s and 30s. 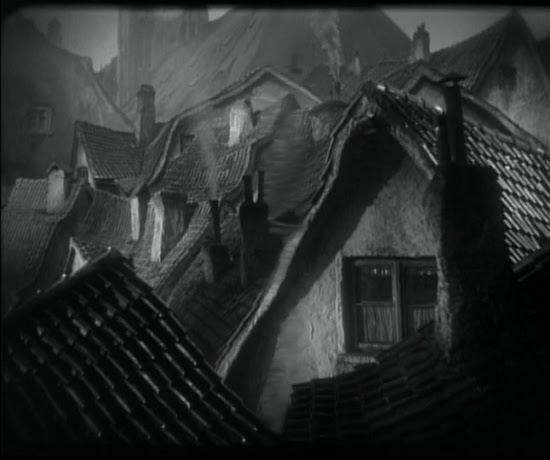 Dietrich's English accent wasn't perfect, but better than I'd expected, better than it tended to be later in her career, in fact, and I'm guessing there were some rather careful line readings. She already exudes an extraordinary cool self-confidence, though. I've read a couple reviews wondering at how the presumably intellectual professor could've fallen under her spell, but I think Professor Rath shows here that academic accomplishment doesn't necessarily translate into wisdom. He's shown early on to be a very simple, guileless fellow as his morning's ruined by the death of his pet bird, who doesn't reply to his cheerful whistle when expected. His heavy handed attempt to punish his students for going to see Lola Lola's show, and his punishment for a student's inability to pronounce the word "the" by having everyone write it two hundred times, also bear this out. What's communicated by Dietrich's charismatic self possession by contrast is someone who simply has more control of her own heart than the Professor. She doesn't hate him, and she doesn't mean to be cruel to him, I don't think--she does stick up for him when others abuse him at first. She's simply not at the mercy of her own emotions as much as he is. One could say she's callous, one could say she's more realistic. Either way, despite the fact that he starts the movie as a sort of mean buffoon, I can't help feeling more for the Professor by the end. 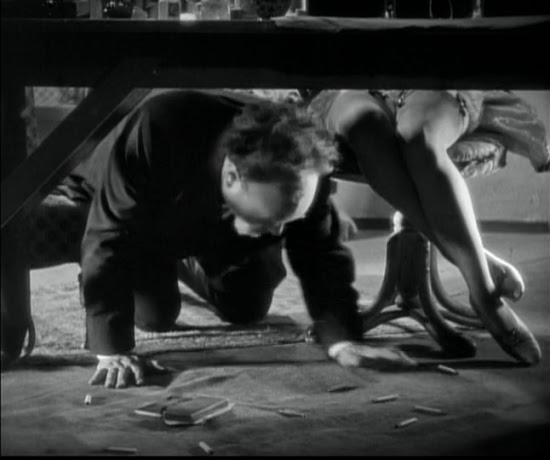