I've spent most of to-day Christmas shopping, and I couldn't resist getting something for myself when I saw the anime/manga store was selling Bakemonogatari merchandise. Among which were fairly cheap boxes of chibi versions of characters with tiny keychains. These were "blind boxes," meaning you don't know which character you're going to get until you've purchased and opened the box. I scored a Senjougahara; 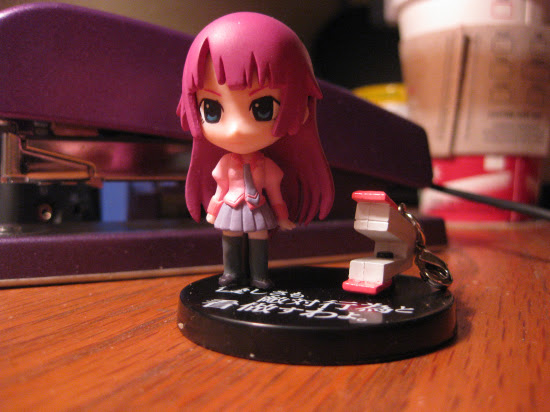 I was trying to explain the concept of moe to some people I met on Second Life last night--tsundere being a sort of moe--and I was fascinated by the conflicted entry Wikipedia has on the subject. I found this quote from Hayao Miyazaki interesting;

It's difficult. They immediately become the subjects of lolicon fetishism. In a sense, if we want to depict someone who is affirmative to us, we have no choice but to make them as lovely as possible. But now, there are too many people who shamelessly depict (such heroines) as if they just want (such girls) as pets, and things are escalating more and more.

I definitely agree there's a troubling aspect to the trend, and seems to me borne of antisocial cultural tendencies, where guys go their whole lives spending more time with statuettes and pillows than they spend--or even want to spend--with actual girls. It sort of reminds me of the Futurama episode with the custom robot girlfriends, where a mock cautionary video showed a young man more interested in making out with his "[Marilyn] Monroe-bot" than in going to school, getting a job, and spending time with an actual girlfriend. This doesn't sound far from what's actually happening in Asian and, to some extent, western cultures with respect to NEETs and hikikomori.

I personally find myself inclined to see interest in the sort of moe art Miyazaki talks about as being more of a symptom than a cause. I also don't think moe, or fetishism, is inherently objectifying of people.

I found myself contemplating Nastassya Filipovna in The Idiot as an example of a tsundere. She fits the bill--deliberately doing things that hurts or distances herself from Prince Myshkin, the man she evidently actually loves. And Prince Myshkin, the protagonist of The Idiot, fits the profile of most shonen or seinen male protagonists--the simple, good natured man who's almost inexplicably adored by everyone, particularly women.

But Nastassya Filipovna's behaviour is borne of the abuse she suffered as a child and her hostility towards those she loves is indicative of her reluctance to trust those she loves for having had that trust betrayed horribly in the past (not unlike Senjougahara, in fact). And Myshkin, for his good nature and simplicity, could be seen as possessing those qualities which Dostoevsky feels ought to be generally appreciated. In this way also we can see modern anime and manga as providing a good example. It's a form of ego stroking fantasy, but that's not necessarily a bad thing. If it makes people feel good about themselves for potentially having qualities that help other people, it's potentially a good thing.

Though one can see the trouble of guys leading themselves to believe there are specific ways to score points with specific female personality types to win their affection, and it's pretty insulting to say to a woman, "Oh, you're just caustic because you really like him!" So the problem, as I see it, is the old problem of characters simply being badly written. If the story is made up only of formula, of course it can only be appreciated by lazy thinkers. But I don't see how a tsundere as a form is inherently any more destructive than a harlequinn or a pantaloon.

The newest Panty and Stocking with Garterbelt got me thinking how Panty might in some ways be an anti-moe. One could say the slutty crazy girl is a type, but she and Stocking are clearly the POV operators of this dream. Panty's sexual liberty ultimately feels more like intellectual independence for her rather than painting her as an easy to use object. Stocking is very moe, being explicitly goth/lolita, but again independently motivated. This week's episode was particularly good too--I even kind of liked the English lyrics song that sounds like I'd appreciate it more if I didn't quite understand English. The whole episode feels somehow like mid-90s MTV.