The sample video for the upcoming Rifftrax release of Santa and the Ice Cream Bunny is some scary shit. I can't wait to watch this thing, but I know I could only do it with Mike, Kevin, and Bill holding my brain hands.

I'd actually been thinking about how much I'd like to see a Rifftrax Christmas special. I tend to associate MST3k with Thanksgiving because of the old Turkey Day marathons Comedy Central used to do, most memorably one year hosted by Adam West. But the Christmas episodes, particularly the dubbed Mexican film Santa Claus, are a permanent part of the Christmas room in my creepy mind maze.

I guess I've been bit by the nostalgia mosquito again to-day. I had a strong urge to watch the cat's tongue arc from the second season of Ranma 1/2, and I watched the first episode of it, "Yappari Neko ga Kirai?" ("You Really Do Hate Cats?") with breakfast. You can see the second season's lower budget pretty clearly in this shot; 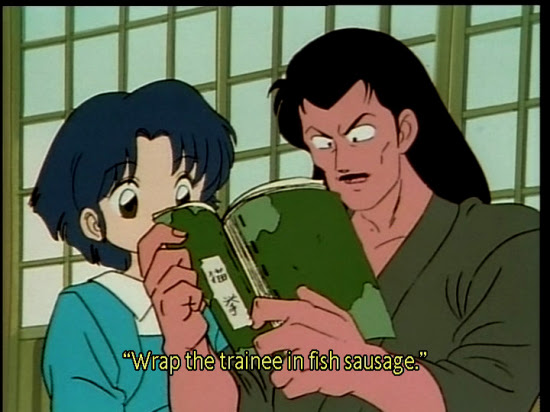 It's not the only time I've seen this--I even saw it in a recent episode of an American series I like, where you'd think the fact that animation cells are so often compiled on computer now would make it easy to correct a mistake like this. But this old Ranma episode aired in 1989 and was hand painted. In high school, I remember thinking how much the low budget of season two showed, but now it actually mostly looks really good, compared to modern low budget anime. Maybe the animators were more conscious there was less room for error, probably they also knew they couldn't lean on the easy shading effects and colour palettes of computer programmes.

It's 3:30pm, and I still feel like I just woke up. I was up late last night doing laundry, and as a consequence I saw some people online in SL I hadn't been able to play chess with since I was on my nocturnal schedule. I had a really good chess day, finally. I played five games and won four. I'm bracing myself for the inevitable several months of losses to follow.
Posted by Setsuled at 3:41 PM
Email ThisBlogThis!Share to TwitterShare to FacebookShare to Pinterest