Eh, I feel like-ah shit, as Chico Marx might say. Maybe it was the rum last night, maybe it was the mostly green potato I ate at 2am, maybe it was blrraaauahah rah rah, ga ga . . . lada ga ga metal bikinis business men watching dancer in strait jack wa-bluh.

Premise; jet setter George Clooney struck by midlife crisis ennui pays Lady Gaga to play poker with him on her face. Fuck everyone.

Seriously, I feel like-ah shit, as Chico Marx might say. That is to say, I'm saying again that he might have said it. 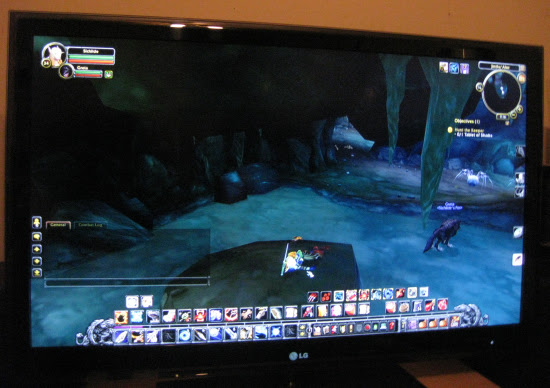 Waiting for a boss to respawn. I have her pet wolf, Greta, waiting on the spawn spot. Sichilde's companion pet is the cockroach sitting next to her. I'm hoping to-night maybe I can get a frog from the Dark Moon Faire. Is it just me, or do Alliance characters get much better companion pets? There are cats all over the blood elf starter area, but the only companion pet you can buy is some stupid wyrm thing. Not that I know too much about the blood elf starter area since I high tailed it right to the Forsaken starter area at level one. You can see Sichilde's even wearing the Forsaken tabard, despite never having been in a dungeon. She's also never set foot on Kalimdor.

Tim remarked at one point it was too bad Sichilde couldn't cannibalise a corpse to regain health like a real Forsaken. "Sichilde is Forsaken!" I protested, "She is Forsaken! Will someone please Forsake her? Come on, even just a little bit?"