A Nipple of Truth Pierces the Camisole of Ignorance

It is nice to see the repeal of Don't Ask, Don't Tell to-day. Perhaps this is the first step to a day where our brave warriors are totally unafraid of cooties. But I'm a dreamer. Maybe we'll get around to switching to the metric system, too.

Who'd have thought an organisation that trains its members to see large groups of foreign combatants as inhuman would cling to a policy of intolerance for so long? Maybe the U.S. will get around to accomplishing something again, one day.

I've been thinking to-day about how the largely misinformed state in which the American people live is not only detrimental to those people and the wisdom of the decisions they make but also to the perceptions politicians have of them. I wonder if Obama would be so timid without studies like the one I saw a couple days ago that showed viewers of Fox News, the most watched news channel by a wide margin, are significantly more likely to believe that;

--The economy is getting worse (26 points)

--The stimulus legislation did not include any tax cuts (14 points)

--Their own income taxes have gone up (14 points)

--The auto bailout only occurred under Obama (13 points)

While I'm posting links to Huffington Post, this post by Michael Moore about a characteristic example of the laziness of modern journalists is pretty funny. I particularly like this bit;

You have to choose one, it can't be both.

Sadly, I can't agree with that last line of Moore's when we've all heard about how the same people saying Obama's a secret Muslim were also saying he was dangerously influenced by his former pastor.

The words written and spoken by the Fox News crowd aren't meant to be taken for their literal meaning, but for the overall feelings of irrational hate and fear they convey. If they felt they could fill 24 hours with mean grunting, they would.

Gods, I love Doctor Who; 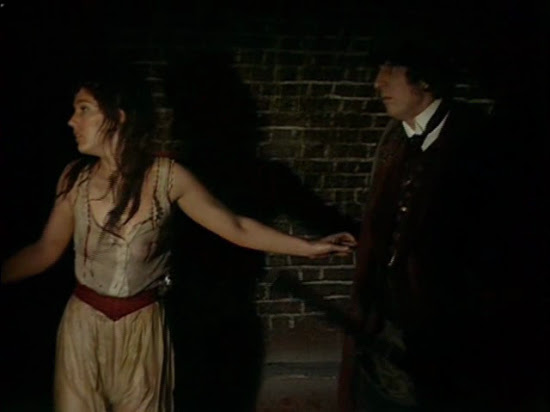 Of course, it would be an anachronism for Leela to be wearing a bra under her camisole in Victorian London, and presumably out of character for her generally, but I'm beginning to wonder if anyone wore bras in the 1970s. The previous serial, "The Robots of Death," prominently featured the nipples of two female guest stars, and one of the things I liked best about Klute's visuals was that Jane Fonda was virtually topless at all times.

But I'm liking Leela for more than her boobs. It's really nice to see a female companion who makes herself useful throwing knives and darts and getting villains in headlocks. Or even just innocently sassing the Doctor.

DOCTOR: Do you know what that is?

LEELA (smiling): Oh! You asked me so that you could tell me.

DOCTOR (subtly off balance): That's--right.
Posted by Setsuled at 1:51 PM
Email ThisBlogThis!Share to TwitterShare to FacebookShare to Pinterest