I can't remember the last time I looked forward to a movie so much. Maybe The Dark Knight. But this--there are so many ways to look at it that makes it sound good. Indiana Jones teaming up with James Bond. The simple fact of Harrison Ford in a science fiction film--I think this could easily be the best Harrison Ford film since Last Crusade. Thank goodness it's Jon Favreau at the helm instead of a studio processed plastic man like Brett Ratner, McG, or Zack Snyder. I still can't believe Christopher Nolan is producing Snyder's Superman movie. Boy, that's going to suck, and it's going to tank for the same reason the last one did, and the same reason the Hulk movies did--no-one wants Superman or Hulk movies right now. And Thor? Ha. They might've brought in the 300 crowd if they'd sold it like the downright white supremacist looking The Eagle, but they chose to go with a vaguely futuristic, leather body suit Valhalla, and therefore milquetoast.

That Cowboys and Aliens trailer above isn't the Super Bowl one--I like this one better--but it was the best looking movie advertised during the game. I went over to my parents' house yesterday to have snacks with everyone and stare blankly at the screen, managing to not hold the names of both teams in my memory for two seconds. J.J. Abrams' Super 8 looks like it might be decent. Like Cowboys and Aliens, it's produced by Steven Spielberg and directed by a Howard Stern Show regular. It's always exciting when the Stern Show's tied into a good movie or TV show. I've been meaning to try watching Fringe for some time just for Eric the Midget's cameo.

I actually had some more to say about The Idiot yesterday but I was in a rush to get to my parents' house by a certain time. What I wanted to add was, I keep thinking about Nastassya Filipovna as a tsundere. Now it almost seems like Dostoevsky had been watching that type of anime for some time and decided to dive in and add some depth to the tsundere/innocent guy dichotomy. Discussing Nastassya with Aglaya, who had been receiving letters from Nastassya trying to convince her to marry Myshkin, the prince says;

". . . That unhappy woman is deeply convinced that she is the most fallen, the most vicious creature in the whole world. Oh, don't hold her up to scorn, don't cast stones at her. She has tortured herself too much with her underserved feeling of shame. And what in the name of heaven is she to blame for? Oh, she will cry out every minute, in her state of exultation, that she is the victim of people, the victim of a depraved and evil man; but whatever she tells you, you may be sure she is the first to disbelieve it, and to believe with her whole heart that, on the contrary, she is herself to blame. When I tried to dispel those dark feelings she suffered so that my heart will never recover as long as I remember that dreadful time."

Again, there's evidence of abuse in Nastassya's youth that Dostoevsky never explicitly spells out, though we know who the "evil man," her adoptive father, is and it's not hard to figure out what he did. Myshkin repeatedly insists Nastassya is a madwoman and also that he no longer loves her but rather pities her. I'm not sure that last part is accurate insight on Myshkin's part, but if it is, there's a way of looking at it that's extraordinarily sinister. I've seen Myshkin referred to as a Christ-like figure in some reviews and responses to the book, but an impression I've sort of been getting is Myshkin as God, Nastassya as humanity, Rogozhin as the Devil, and all the other characters being members of a heavenly court. As I said, Nastassya Filipovna is rarely spoken of or mentioned by name but the effects of her existence continually manifest in the other characters and she seems to be the spark that begins all the debates on government, philosophy, and psychology all the characters engage in. The fact that the book begins with Myshkin and Rogozhin meeting each other on a train creates a scene almost like God and the Devil making their wager over Job. From this perspective, Myshkin's love for Nastassya dimming and believing she's better off marrying Rogozhin has quite a terrific resonance. This is a really good book.

I played six games of chess to-day and here's the only one I won; 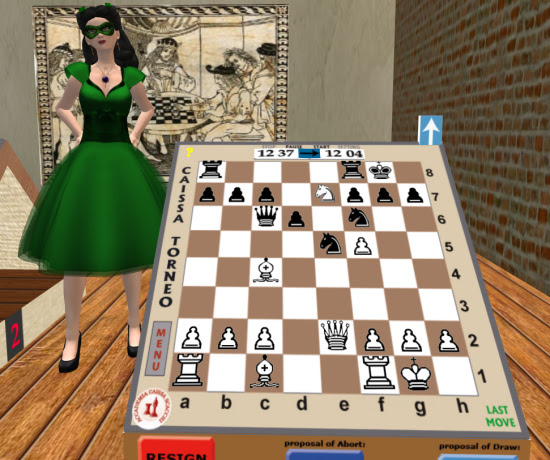 I was playing white--my last move was the knight to e7, taking a bishop there, whereupon the black player resigned. Complete blind luck on my part. I'd had my knight at d5 in the hopes of trading it for his knight at f6 to break up the collaborative threat of his pair. Then black moved the Queen, his bishop's only protection, probably to put double threat on my bishop and set up for an eventual attack on my King. You have to spin so many plates in chess.
Posted by Setsuled at 5:02 PM
Email ThisBlogThis!Share to TwitterShare to FacebookShare to Pinterest