I went downtown to have lunch at Pokez yesterday, a restaurant where I know I can get a massive vegan burrito for under five dollars. I never wanted to become a vegan, but milk products seem to offend my digestion nowadays and when I had a hard boiled egg last week I felt like I'd eaten a big rock, a feeling that stayed with me for about five hours. Though bread made with egg and milk doesn't seem to be bothering me.

Maybe I'm just losing my taste for dairy products, as I don't feel particularly sad about avoiding them. Anyway, I got some great vegan mayo recently--it's made of water, canola oil, cornstarch, white vinegar, apple cider vinegar, sea salt, soy, lemon juice, xanthan gum, onion powder, rosemary, mustard oil, turmeric, and paprika. Somehow all that adds up to something that tastes like a slightly fruity mayo.

I accidentally put paprika on my oatmeal yesterday, grabbing it instead of the ground cinnamon. It wasn't bad. 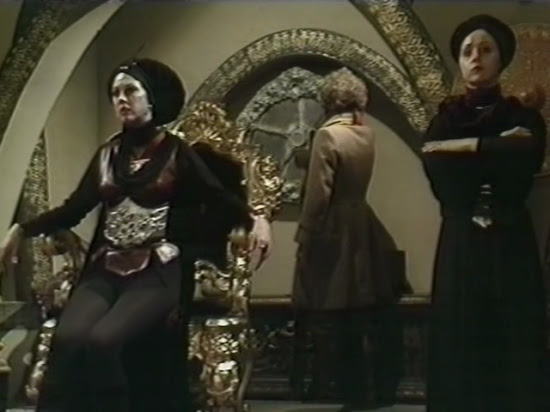 With lunch to-day, I watched the last episode of "The Creature of the Pit" Doctor Who serial. I see it was actually filmed before "The City of Death", so maybe that's why the writers felt no compunction about including so much comedy. I liked it--even really gratuitously silly bits like the Doctor, hanging on the edge of a pit, pulling out a book on how to climb Mount Everest, discovering the book's in Tibetan, and then pulling out a book called Teach Yourself Tibetan. Though I would've thought the Doctor spoke Tibetan--anyway, he claims to know every Chinese language. I wonder how he picked those up.

"The Creature of the Pit" was another to feature a lot of well drawn supporting characters, though I wish Adrasta had been more than a snarling, two dimensional villain, as her makeup and costume were fantastic. 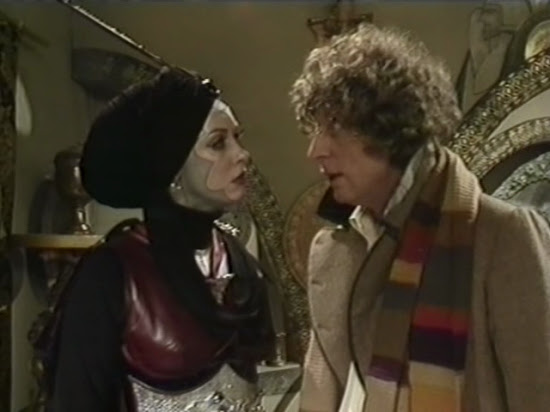 This was one of the best looking serials. Though I suspect this dress made Romana miss her old boobs. 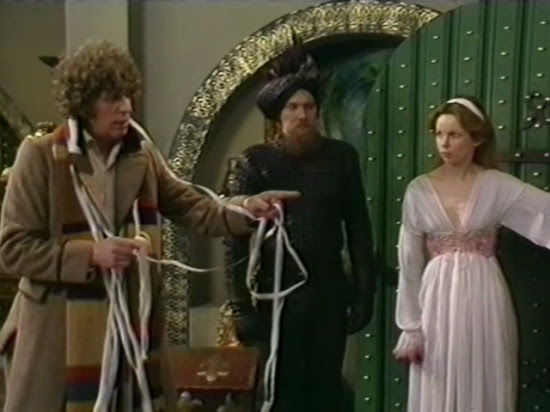