Now's No Time for Voyaging

Having a lazy Saturday. All my Saturdays seem to be lazy lately, though--I always stay in my pyjamas 'til afternoon playing chess in Second Life. I won two and lost one to-day.

I watched part of Now, Voyager last night but had to stop because it turns out that movie is really really bad. I'd been in the mood for chick flicks lately that I've never seen before, so I googled "greatest romance movies" and things like that. I found some truly lousy lists, like this AFI one. Moonstruck ahead of Vertigo? Bullshit. Though I think an argument could be made neither movie belongs on the list at all.

An Affair to Remember certainly doesn't belong at number 5. I'm okay with Roman Holiday at 4, though it certainly doesn't feel like it should be that high up. I appreciate the acknowledgement of King Kong's sexual subtext, but I wouldn't go so far as to say it belongs on this list. One might as well include Citizen Kane. Guess Who's Coming to Dinner definitely doesn't belong and Picnic doesn't belong on any list that might indicate there's something positive about it. It seems like It Happened One Night should certainly be higher.

Of course, another problem with the list is that I've seen almost everything on it. If any of you would like to recommend some chick flicks to me, I'd appreciate it, so long as you avoid recommending movies featuring Barbara Streisand or Cher. Unless it's a movie where the two of them compulsively start clawing at each other at some posh wedding. And then only if there's lots of blood.

I need to go get some lunch, then maybe I'll go to Tim's and play some World of Warcraft. Things have been easier for me since he moved some of his high level characters back to Horde. Here's one of his characters running one of mine through Scarlet Monastery and experiencing one of the many post-Cataclysm graphical problems; 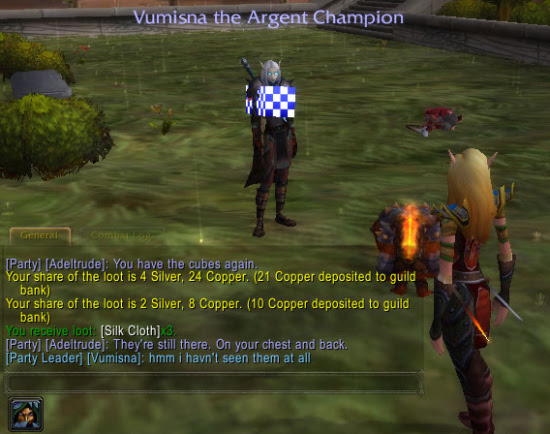 Posted by Setsuled at 3:58 PM
Email ThisBlogThis!Share to TwitterShare to FacebookShare to Pinterest