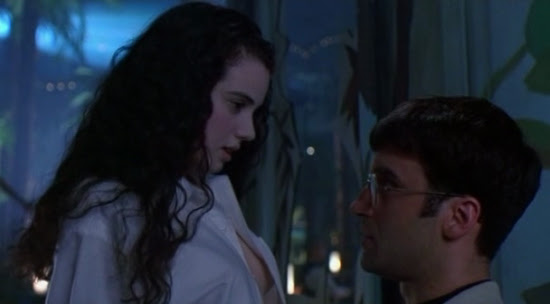 I watched Atom Egoyan's 1994 film Exotica last night. It's a fascinating film about sexuality that, in the end, might convince viewers that it was never actually about sexuality to begin with. But it's by exploiting our presumptions that the film seems to communicate its statement.

My favourite example is a scene where Bruce Greenwood's character with Christina (Mia Kirshner), a woman who works at the strip club Exotica and regularly gives him lap dances, exchanges ritualistic dialogue about how he needs to be around to protect her. Christina's dressed in a school uniform and Elias Koteas, as the DJ, continually ruminates on the mic about the appeal of school girls. Later revelations in the film tell us that the relationships these characters have are quite different from how they appear, yet it still seemed to be a commentary on sexuality to me. It's like eating vegan mayo making you think about what's distinctive about the flavour of real mayo.

The movie's filled with isolated characters attempting to find connexion through ritual. A subplot features a man named Thomas almost having a sexual encounter with a man who buys a ballet ticket from him. Thomas chickens out, but later he recreates the experience repeatedly by selling ballet tickets on the street to guys he eventually goes out with.

Thomas is involved in an exotic animal smuggling operation, and his conversations with Greenwood's character, Francis, who's auditing him as part of an investigation into the smuggling scheme, is dripping with loud subtext, like so many conversations in the film--Thomas' pet shop is too warm for Francis, who asks that the heat be turned down, adding he can understand why odd temperatures would be necessary for the animals. Thomas says that actually the animals are surprisingly "hardy." Francis almost defensively says he never said the animals weren't hardy.

Sometimes I found this stuff over the top. I'm on the fence about whether or not I like the big switch at the end--I kind of would've liked something much weirder, a bolder statement on human psychology, but I bet the way it is fucked with the minds of a lot of squares.

What I liked was how the film was ultimately about people vainly trying to find a way to live in a world they're not really connected to, seeking to build something to replace that feeling of connexion with these rituals and calculated words. "You never asked to be born into this world," as Francis says at one point. He can't help but wonder sometimes, "Who did?"

It's a nice looking film. Christina dancing to Leonard Cohen's "Everybody Knows" is great for its sexiness and depth of meaning. I don't think I liked it quite as much as Egoyan's Chloe, though.
Posted by Setsuled at 6:41 PM
Email ThisBlogThis!Share to TwitterShare to FacebookShare to Pinterest