The Veracity of Blood 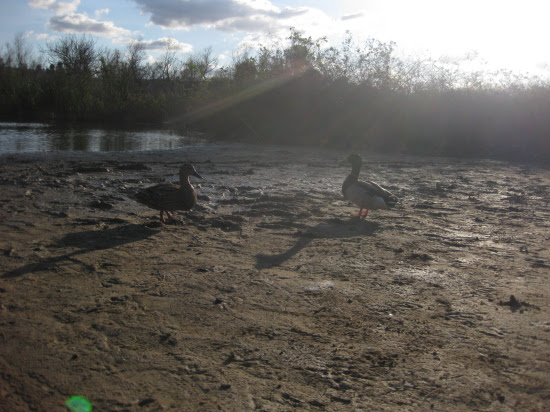 I went to have a look at the river's most recent swell from the rain and felt really bad for not having any bread for the ducks when they started following me around, clearly expecting something.

I was thinking about piracy a lot yesterday. The chapter I read yesterday from my history text book was about English sugar and tobacco plantations in the West Indies of the seventeenth century and the attendant institutions of slavery and piracy. I was continually reminded of Captain Blood as I discovered a lot of the movie's plot--and even more of the novel upon which the movie was based--had basis in fact. White political prisoners were shipped from England to the West Indies as slaves to work the sugar plantations, and they did sometimes escape and become pirates. The movie changed the location of the plantation where Blood was enslaved to Port Royal from the book's more likely location of Bridgetown, probably because it sounds like Jamaica at the time was more scenic than the deforested Barbados.

The first Pirates of the Caribbean movie starts in Port Royal, some might remember. I was watching that movie last night, the first time since I saw it in the theatre. I enjoyed it a little more than I remember--it's a fun, easy adventure movie. I couldn't help wishing it'd had more teeth--It is a Disney movie, but that didn't stop Treasure Island from having a real sense of danger to it.

But mainly I was bothered by just how clean cut everyone was. I just can't picture Jack Sparrow robbing and really threatening innocent people.

To-day I read this story about Somali pirates killing four American hostages to-day. I don't think murder is ever justified, but I can't help seeing these guys' point of view. Large, foreign companies come in to plunder fish an leave toxic waste. It's no wonder ignorant, violent young men would turn to violence as a solution. With the juxtaposition of Somalian starvation, four rich Americans showing up in a yacht to hand out bibles is tragically obnoxious. I don't think they deserved to die, but I can't help seeing this as two tides of ignorance crashing into each other.

Yesterday I was thinking I'd like to see maybe an all out pirate noir. I want a Marlon Brando pirate. Genuinely dangerous and complicated characters in a hellish existence. Maybe a Coen Brothers pirate movie. There's a real human story to be told.
Posted by Setsuled at 1:56 PM
Email ThisBlogThis!Share to TwitterShare to FacebookShare to Pinterest