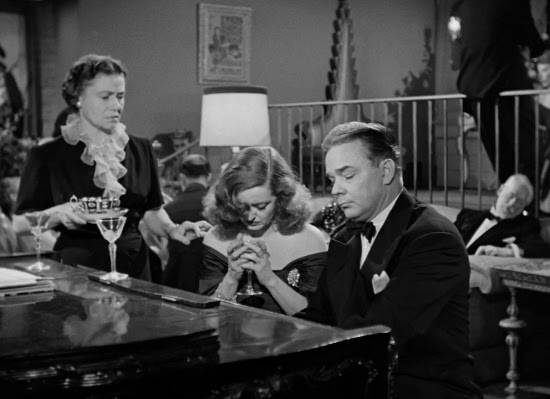 I've seen nine Bette Davis movies now (not counting the first twenty minutes of Now, Voyager) and I saw my favourite last night, All About Eve. It's not a perfect film, but it's certainly a sort of grand film. 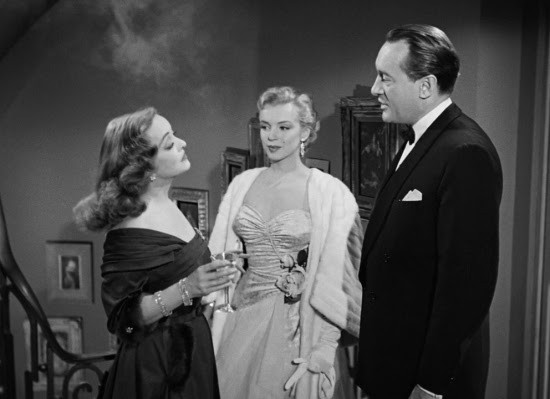 Although the ending wonderfully makes of the film a single piece, mostly All About Eve feels rather like two movies spliced together, with aging theatre star Margo Channing (Bette Davis) at the centre of one and theatre critic Addison DeWitt (George Sanders) at the centre of the other. Aspects of the two movies, in my opinion, even sabotage each other to some extent.

The story of Eve Harrington's gradual, parasitic relationship with Margo is amazing entirely because of how it reveals Margo to be the most intelligent person of her social circle, the only person who senses imminent doom in the form of her ambitious and ingratiating understudy, but is considered too irrational to overcome the "good sense" of her friends. Only Margo can see through the blanket of delusion everyone's woven about themselves entirely with politeness. Everyone knows at some level that Margo's getting too old to continue playing young parts, but only Margo can really face it while everyone else lets propriety keep up the fiction until it becomes cruel. Only Margo can see the portent of the unnaturally subservient position into which Eve's placed herself--everyone thinks it's Margo's jealousy that causes her to see anything sinister in Eve's motives, but it is precisely Margo's ability to see past her own ego that allows her to see Eve's attachment to the star ultimately has little to do with tribute.

In one of his many great, well delivered lines of the film, Addison says to Eve, in response to one of her typically, extremely humble assertions in reference to her acting ability, "I think the time has come for you to shed some of your humility. It is just as false not to blow your horn at all as it is to blow it too loudly . . . We all come into this world with our little egos equipped with individual horns."

Eve Harrington is actually the weakest point in the film to me. She's played by Anne Baxter, who has none of the extraordinary star quality the other characters see in her. One wishes she and Marilyn Monroe, who appears in a very minor role, had been switched in casting. And for the sake of Margo's story, Eve's reveal as a cut and dry con artist, who'd purposely fabricated elements of her past, is less interesting to me than a story of an unselfconsciously ambitious young actress, someone who at first only seeks to supplant her idol on a subconscious level, pursuing a subtler sort of cutthroat path that would perhaps mirror Margo's past. 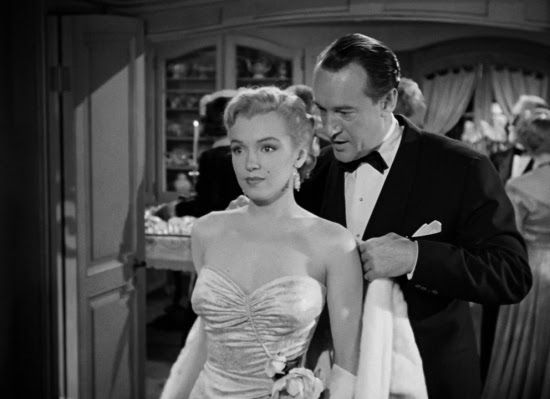 On the other hand, Eve's unambiguously wicked character serves to make the George Sanders storyline more delightful. Addison DeWitt is both thoroughly evil and totally sympathetic. It's impossible not to like him, largely due to Sanders' performance, and possibly also because he's so ruthlessly honest with himself. It put me in the mood to watch again the version of The Picture of Dorian Gray where Sanders plays Lord Henry. 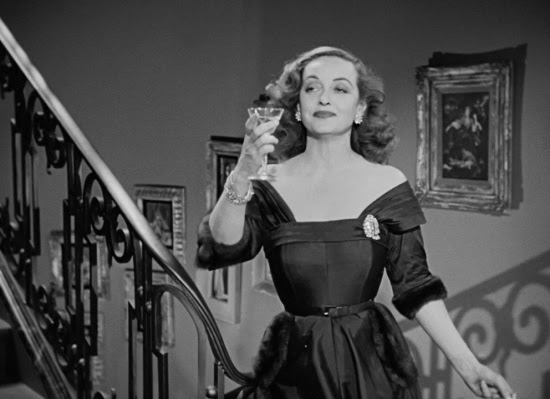 Posted by Setsuled at 7:34 PM
Email ThisBlogThis!Share to TwitterShare to FacebookShare to Pinterest