Lord of the Crabs

Yesterday was very long--I got up early and I had class until 10pm. The teacher for my last class was very sick and said he was going to let us out early, but instead kept us all three hours, the last half hour of which he spent reading to us posted traffic and courtesy signs translated into English from other languages to illustrate the differences in how things are expressed in different languages. He was showing how there's no such thing as a perfect translation, something I'm rather glad to see being taught. It's something that's too often overlooked.

Afterwards, I watched the first part of The Return of the King with dinner. I wish that screenplay had been more carefully written. There are lots of lines that rub me the wrong way, and I notice more of them each time I watch the movie. Legolas saying, "Game over," has bugged me from this first, but this time I got stuck on Gimli saying, "He can't hold his liquor!"

Am I to assume they've been drinking pints of liquor? I know they have brandy in Middle Earth. But I feel like mead would've been a more appropriate beverage for the great hall of Edoras. Anyway, I don't think brandy should be so frothy.

I also hate the lighting when Aragorn finds Eowyn sleeping later in the hall. It really flatters her with that cool blue, fur trimmed blanket, but for "not yet dawn" that's some real blazing moonlight. Then, of course, Aragorn steps outside for one of the worst day for night shots in recent film history, though I kind of forgive the film for this after hearing how dangerous it was to film at night in Edoras.

There's still so much I love about those movies, though. Return of the King is probably the weakest, but I adore Minas Tirith. Gandalf riding through the streets gets me every time.

Of course, all the little anachronisms in the Lord of the Rings movies can't begin to approach World of Warcraft's levels. I had to pretty much accept from the start that WoW's basically a junk drawer of unfinished parts. As I've said before, mainly like a minigolf course.

I'm still working on getting the companion pets achievement with my hunter. The other day I got the daily fishing quest pet, the little crab, which happens to look exactly like my hunter pet crab; 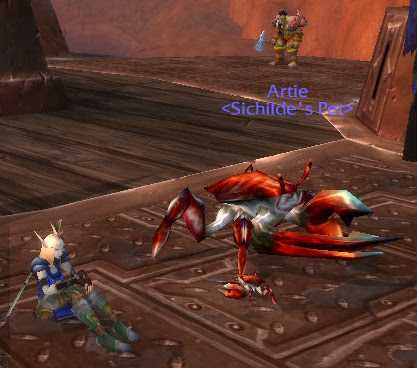 It's like I have the daddy crab and the baby crab. I named the crab after Artie Lange, which made me lament failing to name my monkey pet Bababooey. I went for the King Lear reference instead and named him Gloucester. Oh, well. At least he's not blind.
Posted by Setsuled at 5:10 PM
Email ThisBlogThis!Share to TwitterShare to FacebookShare to Pinterest