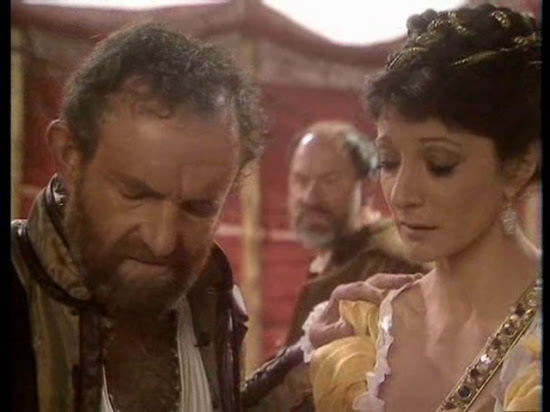 As a matter of fact, Shakespeare's Antony and Cleopatra is a lot better than 1963's Cleopatra. It's certainly easy to compare the two--the 1963 film covers a lot of the same ground in its latter half, almost point for point, except an effort was apparently made to make things less interesting or, rather, to try to keep things as simple as possible. Shakespeare, using the same plot points, tells a far more fascinating story of human pride and inevitable fallibility clashing with terrible results.

Despite being played by the ever wonderful Jean Marsh in the 1963 film, her brief appearances and dazed affection for Antony has nowhere near the impact of the scene in Shakespeare's play where she shows up to plead Antony's case to Octavian only to find out Antony is at that very moment with Cleopatra. Despite being portrayed by the wonderful Roddy McDowall in the 1963 film, Octavian as the straight forward villain, apparently already scheming about doing evil things before the death of Julius Caesar, is not as interesting as the man who initially befriends Antony, respects him, and again and again tries to give Antony a way out in Shakespeare's play before undertaking the grim task of destroying Antony completely. A scene at the end of the 1963 movie has McDowall reacting to Antony's death, demanding people take note of the man's passing with awe and solemnity, superficially similar to a scene in Shakespeare's play, but coming off in the 1963 film more like Octavian wants people to respect what he accomplished in defeating Antony while in Shakespeare's play it seems more about Octavian's grief and sort of existential horror that the great Antony should die after having been laid so low.

It's the unmanning of Antony that most drives the story, the unmanning by his own folly precipitated by his pride. His pride provokes him to fight Octavian, to be reckless in his affections, and when he indulges his instinct to flee the battlefield with Cleopatra, the image of cowardice this inevitably gives him of himself is too much to bear however much he might try and go through the motions of being the great man he always thought he was. The fractured foundation of his self image is sensed by his men and is at the core of Antony's slow demise. Not abruptly and confusedly like in the 1963 film, but with moments of hope to keep him going, to keep him putting down bets on the horse that he deep down knows has already lost the race.

I watched a 1981 BBC production last night directed by Jonathan Miller, which was a lot better than his production of King Lear. Colin Blakely played Mark Antony--I barely remembered him as the hyperactive Jack Lemmon surrogate Watson in Billy Wilder's The Private Life of Sherlock Holmes. He's suitably more subdued here and very effective. Jane Lapotaire is sadly less so--her sobbing was distractingly reminiscent of Lucille Ball. When Cleopatra cries over Antony's body, "O, Antony!" one shouldn't hear, "O, Ricky, waaaaaaaah! It wasn't true what I said about being dead, I only did it because I thought you didn't like me anymore, waaaaaaah!"